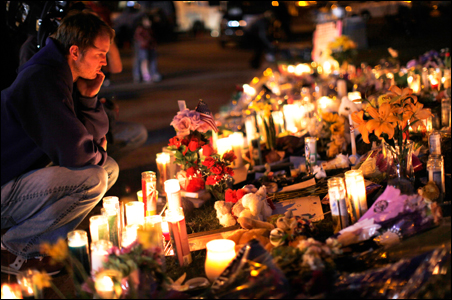 REUTERS/Rick Wilking
A man looks over the memorial outside the hospital where victims of Saturday’s shootings are recovering in Tucson.

The shooting of Democratic Congresswoman Gabrielle Giffords and the slaying of six others in a hail of gunfire Saturday has sparked a national debate over whether heated political rhetoric in recent months may have sparked the violent assault.

The suspected shooter, Jared Lee Loughner, 22, of Tucson, has been described by authorities as “mentally unstable.”

Officials say he is not cooperating with investigators who have not identified a motive for the deadly rampage.

Nonetheless, Prima County Sheriff Clarence Dupnik has told the press that vitriolic political debate may have played a role in the shooting.

“When you look at unbalanced people, how they respond to the vitriol that comes out of certain mouths about tearing down the government. The anger, the hatred, the bigotry that goes on in this country is getting to be outrageous,” Sheriff Dupnik said.

“That may be free speech, but it may not be without consequences,” Dupnik said.

Arizona has been at the center of white-hot political debates over illegal immigration and president Obama’s health-care reform law. Representative Giffords worked near the center of those debates, having just eked out a close reelection victory in November over a tea party-backed Republican candidate. She won by 4,000 votes out of 284,000 votes cast.

Her district was identified by Sarah Palin as a potential target of opportunity for Republicans seeking to regain control of the House of Representatives. The Palin website has been criticized for using what appear to be the cross-hairs of a gun sight on a US map to show the location of 20 vulnerable districts.

After the shooting, the map was taken off the website and a Palin aide told a radio host that the graphic was not gun-related. “We never ever, ever intended it to be gun sights,” Rebecca Mansour, a SarahPAC staff member, told Tammy Bruce on her Saturday radio program.

But Palin herself used weapons metaphors in the run-up to the election. At one point she urged that instead of retreating, Republicans in the 20 identified House districts should “reload.”

Giffords complained about the gun metaphors and being portrayed – as she saw it – in the crosshairs of a gun. “When people do that, they’ve got to realize there’s consequences to that action,” she was quoted as saying.

Some commentators, political analysts, and operatives have been quick to suggest possible connections between the gunman and the tea party movement, Sarah Palin, and other conservatives. Others have urged caution, noting that there is no evidence of a political connection with the shooting.

FBI Director Robert Mueller told reporters on Sunday that investigators have not yet identified a motive. “The investigation is barely 24 hours old,” he said. “It is a little early to speculate on the motive.”

Asked whether political rhetoric could have contributed to or caused the attack, Mueller said it is “premature to say what the motivations were of the individual in this particular case and to draw generalizations off of that.”

But it didn’t stop others from commenting on it. After urging his colleagues to “try to bring down the rhetoric,” Senator Richard Durbin (D) of Illinois criticized Palin on the CNN program “State of the Union.”

“The phrase ‘don’t retreat, reload,’ putting crosshairs on congressional districts as targets, these sorts of things, I think, invite the kind of toxic rhetoric that can lead unstable people to believe this is an acceptable response.”

He noted that while there isn’t anything illegal or unconstitutional about the use of such images in political campaigns, such rhetoric should be unacceptable.

Senator Lamar Alexander (R) of Tennessee countered that the discussion on the CNN program appeared to be implying a direct connection between Sarah Palin and the shooting.

“In all the talk about this we have to be very careful about imputing the motives or the actions of a deranged individual to any particular group of Americans who have their own political beliefs,” Senator Alexander said.

“What we know about this individual, for example, is that he was reading Karl Marx, and reading Hitler, and burning the American flag,” Alexander said. “That’s not the profile of a typical tea party member if that’s the inference that’s being made.”

Senator Jon Kyl (R) of Arizona made a similar point on the CBS program “Face the Nation.” He said authorities do not know what motivated Loughner to start shooting.

“It’s probably giving him too much credit to ascribe a coherent political philosophy to him,” Senator Kyl said. “We just have to acknowledge that there are some mentally unstable people in this country. Who knows what motivates them to do what they do?”

“Face the Nation” host Bob Schieffer ended his broadcast with a lament about the power of the Internet in a “dangerous hair-trigger time.”

“We scream and shout, hurl charges without proof. Those on the other side of the argument become not opponents but enemies. Dangerous, inflammatory words are used with no thought of consequence. All is fair if it makes the point,” he said.

“Those with sick and twisted minds hear us too and are sometimes inflamed by what the rest of us often discard as hollow and silly rhetoric. And so violence becomes part of the argument.”