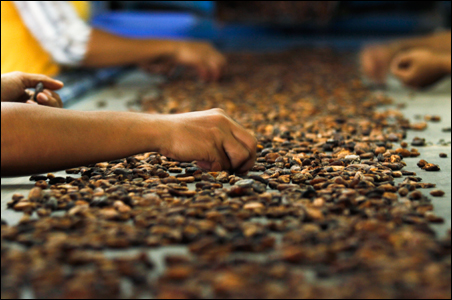 DAKAR, Senegal — Some day or another, the tug-of-war for control of Ivory Coast had to come down to chocolate, or more specifically, cocoa: the cash crop that bankrolled forty years of economic boom, mass immigration, and eventually war across this tropical garden, West Africa’s lushest agricultural zone.

The former French colony is the world’s top contributor to the global chocolate supply, and the vagaries of its climate – especially its political climate – sway the going rate for Mr. Goodbars and Butterfingers more than any single other variable.

Now, eight weeks after the country’s incumbent President Laurent Gbagbo barricaded his opponent in an Abidjan hotel – and two weeks before Valentine’s Day – the treats Americans savor, crave, and wrap in ribbons are primed to become bargaining chips in a power struggle that has already cost at least 260 lives by United Nations figures.

On Monday, Alassane Ouattara, recognized by the UN and Ivory Coast’s electoral commission as the winner of the nation’s Nov. 28 presidential election, asked the world’s cocoa movers to stop buying his country’s cash crop for the month to come.

The Gbagbo administration’s proceeds from the cocoa trade, Mr. Ouattara says – from taxes stamped at the Abidjan port to bribes extorted by gun-brandishing roadside soldiers – are being used to pay the motley of uniformed troops and unruly pro-Gbagbo militias that Human Rights Watch has accused of organized “rape, torture, extra-judicial killings, and forced disappearances.”

By begging the ocean’s container ships to scoop their cocoa from ports in Ghana or Guatemala instead of Ivory Coast, Ouattara is hoping to financially asphyxiate Gbagbo out of his presidential palace – one underpaid, disillusioned soldier at a time.

Most of Ivory Coast cocoa flows through European ports, and with the backing of the European Union, analysts say Outtara is likely to have success.

But “the real showdown,” Chatham House Africa Analyst Alex Vines says, “is who will actually comply with this.”

On Monday, American agro-giant Cargill said it is “temporarily suspending” cocoa purchases from Ivory Coast. The next day, however, the association Caobisco, representing 1,800 European confectioners, said it was waiting “to obtain further clarification.”

“It will take time to carefully assess the potential implications of the cocoa export suspension on our members’ businesses,” Caobisco’s Secretary-General Sabine Nafziger wrote in an e-mailed statement.

Then there’s the 50 to 60 international companies that Africa Analyst Anne Frahauf with the New York-based Eurasia Group consulting firm said are registered to carry cocoa away from the Abidjan port.

“Their actions are going to be really crucial,” she added.

Even more important, Vines says, will be whether daytime traders in London and New York stop purchasing Ivorian beans – and Thomas Mikulski, a strategist with trading firm Lind-Waldock in Chicago doesn’t think they will.

“Traders on the trading floor are not in a wait-and-see mode,” he said. “The see the price ratcheting up and they are buying it.”

Earlier in the week, Outtara wrote to London trading firms asking them to cease.

“If they can stop doing that,” said Ouattara’s economic minister, Toikeusse Mabri, “Gbagbo will not have any money and this conflict is going to end very soon.”

In the trading floors of New York or London, Ouattara’s call for a global boycott on Ivoirian cocoa may make for a salty moral dilemma – but back in Ivory Coast, the thought of canceling the trade that of millions of Ivory Coast’s farmers and truckers call their livelihood presents a more immediate predicament.

So far, many of the planters and sellers implicated in the trade have yet to feel the impact.

“We sell our beans without any problems,” Allo Blanchot, an accountant with a small cocoa growers cooperative said. “Even Cargill, the biggest buyer of them all has said it won’t buy any more beans, but others are buying, betting that the price will go up.”

Should they stop, Gbagbo’s government wants the world to know that millions of Ivorians could suffer during this, the heart of the harvest season.

“Don’t forget that we are talking about seven million people who make their living off of coffee and cocoa,” his Agricultre Minister Issa Malik Coulibaly told reporters, Tuesday. “We don’t have the right, for any reason, no matter what, and still less for a political rationale, to sacrifice these seven million people.”

Even if Ouattara’s cocoa ban succeeds – and brings the conflict to an end by the close of the one-month suspension – analysts say the loss of cocoa revenue by itself would not sweep the Gbagbo government from its entrenched position.

Smuggling to neighboring Ghana and Liberia, Frahauf says, is likely to spike – and Ghana’s cocoa production is already up 52 percent this year, she adds.

Between the farm gate and the Ghanaian border, an Ivoriain trucker carting cocoa could expect to pass through hundreds of miles of regularly roadblocked highways where soldiers demand their de-facto salary.

“There will be a lot of irregular taxation or just plain extortion,” she says.

Plus, cocoa only accounts for twenty percent of the country’s revenue, Vines adds.

“There’s still oil” – an almost impossible export to ban – “which brings in as much money as does cocoa,” he says.

For chocolate gourmands unwrapping Godiva’s on Valentine’s, the Ivorian conflict is likely to mean two things – primarily, confusion over whether the sweets we savor are funding chaos in a near-voiceless part of the planet.

And, of course, higher prices.

“Right now, you can expect to see small jumps in retail price,” said Hector Galvan, a senior trading adviser at RJO Futures in Chicago. “If cocoa continues to climb to $3,500, $3,600, $3,700, you’re going to see some noticeable changes, but not anything where these things jump two or three hundred percent.”

“We shouldn’t take for granted,” he added, “that a conflict in a certain part of the world can reach across the globe very easily now, not because of guns and bullets but because of the way commodities are priced everyday.”