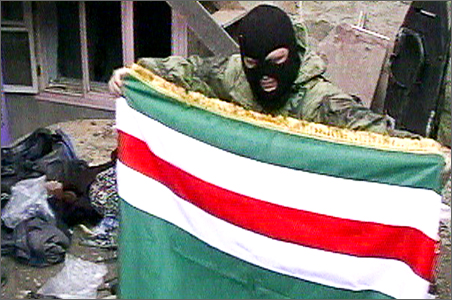 A new video posted over the weekend by Russia’s most wanted terrorist, self-described Chechen “Emir” Doku Umarov, has warned already jittery Muscovites to brace for a “year of blood and tears.” His threat: a wave of assaults by up to 60 suicide bombers trained at a secret base in the North Caucasus.

The slaughter prompted an outpouring of criticism from leaders as well as security experts over ongoing vulnerabilities more than 16 years after Russian forces first invaded the North Caucasus republic of Chechnya in a bid to put down a separatist uprising.

“These operations will be carried out monthly, or weekly, as God allows and depending upon [Russian] reaction,” Mr. Umarov says in thickly accented Russian in the video, which was posted in Russian at Kavkaz Center, a website that often carries statements from Islamist insurgents in Russia’s south.

Wearing army camouflage, flanked by two stone-faced lieutenants, and standing beneath a black flag showing a sword and an inscription in Arabic, the heavily bearded Umarov adds: “Through our actions we will awaken you…. we will make this a year of blood and tears.”

Self-proclaimed leader of an Islamic ‘caliphate’

Umarov styles himself “Emir Dokku Abu Usman” and proclaims himself leader of an Islamic “caliphate” that seeks to wrest from Moscow’s rule virtually the entire northern slope of the Caucasus Mountains, including seven autonomous Russian republics strung out between the Caspian and Black seas.

He has taken responsibility for terrorist acts in the past, notably a twin suicide bombing in Moscow’s crowded metro system last March that killed almost 40 people.

Umarov makes no mention of the Domodedovo attack, but experts say there may be a gruesome reason for that. They say the grim-faced young man standing on Umarov’s left in the video is probably Magomed Yevloyev, a 20-something accounting student from the insurgency-wracked republic of Ingushetia, whom Russian authorities now believe was the suicide bomber who struck the international arrivals area of the airport on Jan. 24.

“In the video, Umarov is introducing this young man, who is going to be sent on a special mission, and there is growing evidence that was the bomber who hit Domodedovo,” says Andrei Soldatov, editor of Agentura.ru, an online journal that follows security issues.

“For Doku Umarov, it’s clearly important to be seen as a leading figure in the global jihad, someone who can threaten the Kremlin. He seems determined to proceed, to keep sending people to strike Moscow,” he says.

The Domodedovo attack has led to a hardening of attitudes among Russians, who appear increasingly resigned to an ongoing terror assault as a fact of life rather than a problem that might be solved politically.

A poll released last week by the independent Levada Center in Moscow found that after the Moscow metro bombing last March, 53 percent of Russians nationwide saw terrorism as a consequence of the 15-year war against separatist and Islamist insurgents in the North Caucasus.

Following the Domodedovo attack, only 41 percent thought so, while 28 percent blamed “international terrorist conspiracy” – markedly up from 19 percent less than a year ago.

“A plurality of respondents still link terrorism to the war in Chechnya, but they do not go so far as to explicitly connect it to the policies of [former president and current prime minister Vladimir] Putin,” says Denis Volkov, a researcher with the Levada Center. “Perhaps this is because this subject is not broached in the mass media, and groups that analyze the situation in these terms do not have the media access that would enable them to make it part of the public discussion.”

Mr. Volkov says more than half of respondents now see terrorism as something that they’ll just have to learn to live with.

“More people support the authorities’ version of the origins of terrorism, and increasingly see Islamist terrorism as Russia’s enemy. We see this feeling that the problem cannot be solved as a factor that’s contributing to uncertainty, tension, and aggression in society. When added to other existing social, ethnic, and economic realities, this could make for a very dangerous combination,” he says.

Thousands of Russian soccer fans went on a violent, racially tinged rampage in Moscow last December after a Russian fan of the Moscow soccer team Spartak was killed in a fight with immigrants from the North Caucasus.

“Growing xenophobia is one of the consequences we see,” as people adjust to the onslaught of terrorism, says Andrei Kolesnikov, opinion editor of the opposition weekly Novaya Gazeta. “People aren’t blaming political leaders, but increasingly they fear Caucasians and non-Russians as the carriers of the terror threat.”

The public mood has been aggravated by a recent wave of false terror alerts, most the work of hoaxers, who have sent emergency services scrambling with dozens of credible but false bomb threats to marketplaces, railroad stations, metro lines, and airports.

“In January alone, we had 42 false alarms, which is a record number,” says Ilgam Kurmanov, head of the Moscow’s police’s sapper [bomb disposal] department.