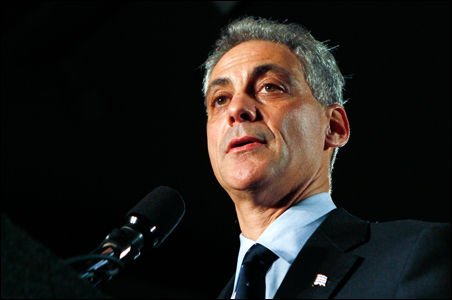 REUTERS/Frank Polich
Chicago mayor-elect Rahm Emanuel talks to supporters as he delivers a speech after winning the mayoral race during an election night party in Chicago.

Rahm Emanuel launched his mayoral campaign here in October shaking hands at El stations, a rush-hour ritual that would become familiar not just to him, but also to most public-transit commuters in Chicago. One-hundred-ten stations and thousands of handshakes later, Mr. Emanuel is mayor-elect of this city.

The former White House chief of staff and Democratic strategist won a hard-fought battle to become Chicago’s 55th mayor, succeeding incumbent Richard M. Daley, who announced in September he would step down at the end of his term.

At a rally held at a union auditorium in the city’s West Loop neighborhood late Tuesday, Mayor-elect Emanuel stood on a stage surrounded by his wife and two children, parents, brother, and local political leaders. At times choking with tears, Emanuel gave a 15-minute speech that outlined his priorities but mainly offered gratitude to supporters and stressed unity among all factions in the city.

“All I can say is, you sure know how to make a guy feel at home,” he said. “What makes this victory most gratifying is it was built on votes from every corner of this city.”

Ahead of Tuesday’s election, Emanuel’s poll numbers never showed him winning a majority in a six-person field, leading to speculation that the likely result would be a runoff contest for another six weeks. But that didn’t happen: Emanuel received 55.2 percent of the vote on Tuesday. Gery Chico, a former chief of staff under Mayor Daley and the runner-up, received 24 percent. Chicago City Clerk Miguel del Valle won 9 percent and former US Sen. Carol Moseley Braun got slightly under 9 percent.

Emanuel endured a five-month campaign that challenged his right to even be on the ballot: A state law requires candidates to be residents for at least one year of the municipality in which they seek office, and Emanuel had been in Washington (though he retained a home in Chicago). Emanuel survived that legal battle, thanks to a ruling by the Illinois Supreme Court in his favor.

Still, many here perceived Emanuel as a different kind of candidate for Chicago.

“Even though he was a congressman from Chicago for three terms, he’s a celebrity from Washington,” says Don Rose, a long-time Chicago political consultant. “As much as [his campaign] tried to make him a ‘real Chicagoan,’ the realities are he is a big celebrity and a nationally known figure. We’ve never had anybody like that run.”

Despite a campaign in which Emanuel was the only white candidate in a field that included two Latino and three black challengers, racial divisions did not polarize the race. Emanuel did not campaign heavily in Chicago’s South Side and West Side, areas of the city that are predominantly black and Latino, but he nevertheless received support from many of leaders in those communities.

Illinois Secretary of State Jesse White, the highest-ranking black leader in the state, said his decision to support Emanuel was not based on race but on the candidate’s national résumé.

“The proof is in the pudding,” Secretary White said during an interview at Emanuel’s rally late Tuesday night. Emanuel’s experience on the national stage shows that he “possesses the toughness not only for the job, but the responsibility that goes on with it,” White said. As for local black leaders, such as the Rev. Jesse Jackson and US Rep. Danny Davis (D), both of whom supported Ms. Moseley-Braun, White predicted that “eventually [they] will get together and coalesce” around Emanuel’s leadership to solve the city’s problems.

What helped Emanuel with black voters was the stealth endorsement from President Obama, says Mr. Rose. Video of Mr. Obama praising Emanuel during the latter’s farewell ceremony in the White House, used in pro-Emanuel television campaign ads, may have given many the impression that Emanuel had the president’s informal blessing.

Obama, in a statement released late Tuesday, predicted that Emanuel would be “a terrific mayor for all the people of Chicago.” “As a Chicagoan and a friend, I couldn’t be prouder,” Obama said. In his speech, Emanuel said the president had called him earlier that night to offer his congratulations.

“One of the ironies” in the race, says Rose, is how Emanuel managed to establish ties with Chicago’s minority communities. “In a sense … the guy who would appear in many ways to be the most divisive figure turns out to be the person with a genuine coalition,” Rose says.

Emanuel also has an expansive network outside Chicago, specifically Hollywood and Wall Street – another edge he maintained over his competitors. Fundraising records show a large share of his donors came from the financial services, real estate, and film and television industries. In total, Emanuel’s $8.3 million bankroll makes his the largest campaign chest in Illinois to date.

Former White House senior adviser David Axelrod said in an interview Tuesday night that Emanuel’s connections, especially in Washington, will not necessarily mean that Chicago will get preferential treatment in federal dollars.

“Chicago will get everything it is entitled to.… I can’t say [Emanuel will] get stronger favors because of it. Obviously, the president has great affection for this city … but he has to be fair, as well. Whatever the city is entitled to the city will get, and I don’t think Rahm will leave one dollar on the table,” Mr. Axelrod said.

This race was a historic one for Chicago. It is the first in 64 years that did not have an incumbent mayor on the ballot, and the first in 22 years without Daley as a candidate. Emanuel will take office in May.

In his speech, Emanuel called Daley “an impossible act to follow” and said the departing mayor “earned a special place in our hearts and our history.”

Alderman Joe Moore, a long-standing member of the city council who won his own reelection bid Tuesday, says Emanuel faces “a huge undertaking.” “There are no more quick fixes or rabbits pulled out of the hat [to deal with the budget deficit]. Daley has pretty much exhausted that repertoire,” he says. The new mayor will probably have to cut city services and, perhaps, increase fees and taxes, Mr. Moore adds.

“They’re all going to be politically tough choices,” he says.

Emanuel said Chicago needs to “confront” the budget deficit, but he added that he wants a “budget that is balanced and a playing field that is fair” to taxpayers.

During his campaign, he hinted that he may seek revenues in new places: possibly a casino along the lakefront, or an increased share in state tax dollars resulting from a recent state tax increase.

“We don’t know what the real Rahm can do. You’ve seen a guy running a textbook campaign, holding himself in check,” says Rose. “The fact is, you can’t cut your way out of this deficit. So how is he going to find revenue? That’s the question.”

Chicagoans may have an opportunity to get answers sooner than they might have expected. In closing his speech Tuesday, Emanuel revealed his plans for Wednesday morning: “I’m going to see you on that El stop.”