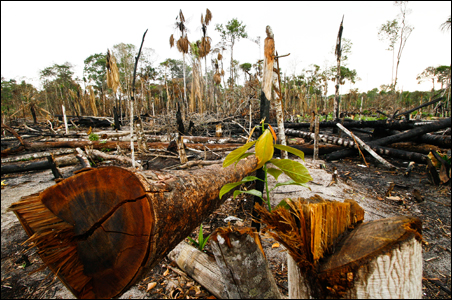 REUTERS/Bruno Kelly
A seedling pokes through the ground in an area of the Amazon jungle that was deforested for an illegal settlement.

The photos show five almost-naked Panoan Indians covered in natural red dyes, probably from the urucu or annatto plant. Some of them are holding bows and arrows and all appear healthy.

The photos were taken by Brazil’s National Indian Foundation (FUNAI) and given to the London-based group Survival, which released them ahead of a BBC documentary called “Jungles” to be broadcast today in the United Kingdom.

While the publication of the photos, widely reprinted online across international media, was criticized by some as exploitative and invasive of the privacy of the Amazonian tribe, Survival said it released the photos to try and jolt the Peruvian government into stopping the loggers’ advance into Brazil. Their publication came just days after Brazil’s government authorized initial work on the controversial Belo Monte hydroelectric plant that is expected to destroy Indian-occupied rain forest elsewhere in the Amazon.

“The illegal loggers will destroy this tribe,” Survival’s director Stephen Corry said in a statement. “It’s vital that the Peruvian government stop them before time runs out. The people in these photos are self-evidently healthy and thriving. What they need from us is their territory protected, so that they can make their own choices about their future.”

There were an estimated between 3 and 5 million Indians in Brazil when Portuguese explorers first arrived here in 1500. Only around 350,000 exist today.

“But this area is now at real risk,” Mr. Corry said, “and if the wave of illegal logging isn’t stopped fast, their future will be taken out of their hands.”

The Peruvian government responded by saying it would make contact with FUNAI to talk about a joint strategy to protect the indians, a move Mr. Corry called “a really encouraging first step.”

Today, 18 percent of the Amazon has been chopped down. Although deforestation rates have slowed in recent years, there are traces or reports of 39 uncontacted tribes still living in the densest parts of the jungle.

Since 2008, FUNAI has conducted military flyovers in Amazonia, where it suspects Indians might be in danger from encroaching farmers, loggers, and miners. Military planes flying at high altitude will use radar, satellite, and infrared technology that can identify humans and their communities through their body heat.