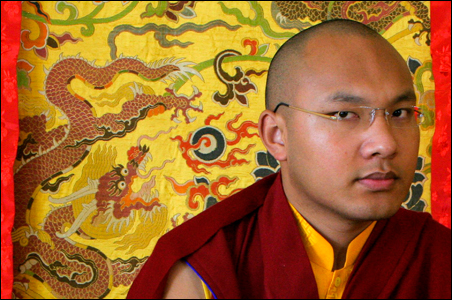 REUTERS/Abhishek Madhukar
Karmapa Lama, the third highest ranking Lama, pauses during an interview with Reuters in the northern Indian hill town of Dharamsala.

NEW DELHI — To his followers around the world, the Tibetan named Ogyen Trinley Dorje is a “living Buddha” – an icon of purity and detachment.

But the discovery of a large stash of cash – some of it in Chinese currency – at his Indian monastery has fueled suspicion in India that the Tibetan figure widely considered next in line to the Dalai Lama is a spy for the Chinese.

The furor has underscored growing tensions between India and China over border issues and increased feelings of insecurity among the thousands of exiled Tibetans living in India, where they have been given asylum, though not citizenship.

On his recent visit to India, Wen Jiabao, the Chinese premier, acknowledged that the longstanding border dispute could “not easily be resolved.”

The neighbors clash intermittently over the north Indian state of Arunachal Pradesh, part of which is claimed by China as “South Tibet.” In recent months, tensions between India and China have escalated sharply. In the past, India has been sympathetic to Tibetans: It gave sanctuary to many Tibetans who fled Tibet with the Dalai Lama in 1959 after Chinese occupation. Now, as India is frequently and increasingly riled by reports of Chinese border incursions, it has begun to respond by strengthening its border areas to secure the disputed territory.

Suspicious of Tibetans
But while India has long been somewhat wary about China’s territorial claims, Indian authorities appear to be increasingly suspicious of Tibetan refugees on its side of the border – a group previously only targeted by the Chinese. Indian police have begun to step up the number of checks on Buddhist monasteries in and near the border area.

On Jan. 27, Indian police found about $1.4 million in foreign currency, some of it in Chinese yuan, stashed at the Karmapa Lama Dorje’s monastery in Dharamsala – the acting capital for Tibetans in exile. The discovery was made during a raid after a large sum of money was found in a car nearby. At least one of Lama Dorje’s aides has been arrested, and the Indian media has been quick to proclaim Dorje a Chinese spy.

Who is Dorje?
Dorje is the Karmapa Lama – one of the three most senior figures in Tibetan Buddhism, along with the Dalai Lama and the Panchen Lama. He has been viewed widely as the most likely political successor to the Dalai Lama, who has indicated he is nearing retirement.

Supporters of the Karmapa Lama say the money was actually a savings of unsolicited donations from the devotees around the world, some of whom are Chinese Buddhists, and that it was going toward building a new monastery.

But Dorje has long raised eyebrows in India, and the government watches his movements closely. Born in China, he was selected by Beijing in 1992 as the 17th incarnation of the Karmapa Lama. Unusually, his Chinese appointment was approved by the Dalai Lama: The Dalai Lama and Chinese authorities rarely agree on Lama appointments.

In 1999 Dorje escaped to India across the Himalayas on horseback with, what appeared to some in India, unusual ease. Many Indians say they believe that’s because China may have managed his flight to strengthen his claim to being the Karmapa Lama, which has been contested by at least one rival faction, although there is no evidence to back such a view.

Compounding jitters about Dorje is the fact that his particular sect of Buddhism, Kagyu, controls important monasteries along India’s border with Tibet.

Support for the next Dalai Lama
In Dharamsala, meanwhile, large crowds of Tibetans have been gathering to show support for the Karmapa Lama and protest media accusations that he is a spy for China.

Facing his supporters on Feb. 2, Dorje urged them to “be at ease … truth will prevail.” He told them, “India, in contrast to Communist China, is a democratic country that is based on the rule of law. Therefore, I trust that things will improve and the truth will become clear in time.”

India meanwhile, has banned Dorje from taking over the monastery built by his predecessor, the last Karmapa Lama, in the Indian border region of Sikkim until claims from rivals are resolved.

For Alka Acharya, a leading Indian sinologist at Delhi’s Jawaharlal Nehru University, rival contenders for the Dalai Lama’s spot is one compelling explanation for the discovery of the cash. The other is “just tremendous bungling – there were huge donations of money coming in and the sect was not organizing them properly.”

“I would very much doubt that he is a spy,” she added. “There is no prima facie evidence for that.”

Exiled Tibetans, meanwhile, some 200,000 of whom reside in India, fear that the accusations against Dorje will damage the Tibet autonomy movement and even Tibetan Buddhism.

Dorje’s possible future as a successor to the current Dalai Lama could be jeopardized if the Indian authorities label him a Chinese spy, and life could become more difficult for India’s Tibetan refugees.

In a recent editorial in the Hindustan Times newspaper, Dibyesh Anand, an assistant professor of international relations at Westminster University, wrote that “hardline officials in China must be laughing their heads off at the Indian media circus. They know that this will not only create confusion in the exiled Tibetan community in India, but will also create disenchantment about India among Tibetans inside China.”