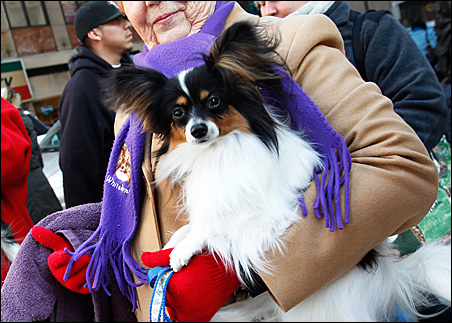 REUTERS/Shannon Stapleton
Andy, a Papillon breed, is carried by its owner outside the Hotel Pennsylvania for the 135th Westminster Kennel Club Dog Show.

The 135th Westminster Dog Show begins this morning in Madison Square Garden in Manhattan. According to The Westminster Kennel Club the show is the first and only champions-only dog show.

Close to 2,600 dogs, embodying 179 breeds from 49 states are scheduled to participate this year, reports the Wall St Journal. Breeds anticipated making their debut at the competition include the Bluetick coonhound, Icelandic sheepdog, and the Cane Corso.

The yearly event is the second longest running sporting event in the country, one year younger than the Kentucky Derby. Interest in the event has expanded beyond hard core dog breeders and K-9 fanatics. This year’s competition will be broadcast in part by CNBC and USA Network during prime time over the competition’s two days.

Public curiosity may stem from the perceived supercilious behavior of some judges and handlers.

After all, who would spend all that time and money on a pooch in times like this? Others may simply be dog lovers wanting to see who will follow in the paw prints of last year’s lovable champion Sadie the Scottish terrier.

People for the Ethical Treatment of Animals, or PETA, always has an interest in creature-related events. The organization may try to interrupt this year’s best in show crowning as it did last year. Protesters holding up signs had to be removed from center ring during the crowning of the champion.

A Valentine for your pooch: Westminster Dog Show