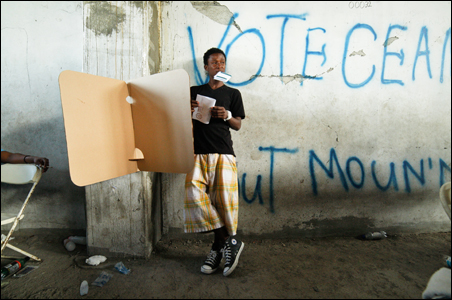 REUTERS/Eduardo Munoz
A man folds his ballot during presidential elections in Port-au-Prince.

Polling stations opened late due to lack of supplies. Voters’ names didn’t appear on registration rolls. In other cases, citizens were even unsure of where to vote.

But for Haiti, Sunday’s election was deemed a success overall, as Haitians cast ballots in what could be their nation’s most important presidential elections.

On top of handling billions of dollars in foreign aid, the new president will be tasked with leading the country through the reconstruction from last year’s earthquake that has left the capital covered in debris: Some 800,000 people live in tent camps in the capital, still displaced from the January 2010 earthquake that damaged or destroyed 188,383 homes and killed some 230,000 people. A cholera epidemic that began last fall continues to spread.

Preliminary results are not expected until March 31 from the second-round election that pitted former First Lady Mirlande Manigat against flashy musician Michel “Sweet Micky” Martelly. Final results are scheduled to be confirmed April 16.

To a lesser degree, Sunday’s run-off vote was marked by many of the same problems as those voters experienced in a first round that culminated with 12 of 19 candidates asking for the vote to be annulled due to widespread fraud, although this time violence was avoided.

“They want to choose for us, they don’t want us to vote, it’s a game,” says Jaybe Alias, who lives in Camp Corail, one of the only government-organized displacement camps. Thousands of people showed up to vote in the camp’s polling station, just north of Port-au-Prince, but election officials had just 40 names on voter rolls. None were his.

“There are thousand of people here,” Mr. Alias says. “How come only 40 people can vote?”

Stories similar to Alias’s were common.

Nevertheless, Haiti’s Provisional Electoral Council deemed the vote successful. Council President Gaillot Dorsinvil told reporters that irregularities would have “no impact on the electoral process as a whole.” Edmond Mulet, who leads the United Nations’ stabilizing force in the country, echoed Mr. Dorsinvil, saying that he saw “a lot of differences compared to Nov. 28. Participation is great.”

Long road to the presidential office

This election has been long delayed. Under the original electoral schedule, a new president was to be inaugurated in February. Yet, due to problems in the first round, the run-off vote was pushed back.

It was complicated by the arrivals of former dictator Jean-Claude “Baby Doc” Duvalier in January and former President Jean-Bertrand Aristide just days before the election. Both had come back from exile.

Their arrivals only seemed to distract from a tense political situation that drew attention from the Obama administration. Secretary of State Hillary Rodham Clinton flew to Port-au-Prince in February to convince President René Préval to adopt an international mission’s recommendation and break the electoral logjam. As a result, Haiti’s electoral council dropped Préval-backed candidate Jude Célestin to third in the final first-round tallies, making him ineligible for the run-off vote. Mr. Martelly replaced him.

On the streets of Port-au-Prince Sunday, a feeling of calm prevailed, a marked difference from the Nov. 28 vote in which thousands took to the streets amid claims of fraud and ballot stuffing.

Hernes Fresner had no trouble voting in Port-au-Prince and later traveled up the hills outside of the city to the suburb of Petionville to support Martelly at his polling station. “We need change. We need a different type of person leading the country,” he says. Martelly “likes the people and the people like him.”

Supporters of Martelly peppered him with campaign signs thrown like confetti.

Billions in aid hang in balance

Both Martelly and his opponent, Ms. Manigat, are considered politically conservative, but they offered contrasting styles to an electorate preoccupied with the slowness of reconstruction from last year’s 7.0-magnitude earthquake and the cholera epidemic that followed.

Martelly, a middle-aged kompa music star known for his pants-dropping routines on stage, was a street favorite among many young people in a country with a population that is reportedly more than half under age 25.

Manigat, an avuncular figure 20 years the elder of Martelly, was known as an academic and as the wife of a former president.

Regardless of who prevails, Haitians should expect more involvement from foreign governments, particularly in the rebuilding process, says Francois Pierre-Louis, Jr., a professor at Queens College in New York and an adviser to Jacques-Édouard Alexis, a presidential candidate eliminated in the first round.

The run-off election was widely seen as a key step in gaining the confidence of foreign governments that are funding the reconstruction process. Much of the billions in funding pledged to help the country rebuild following last year’s earthquake has been held up because of the electoral crisis. According to the Office of the Special Envoy for Haiti (pdf), governments have yet to disperse 70 percent of $4.53 billion pledged in aid programs for Haiti over 2010 and 2011.

“We will see the international community playing a much more active role in Haiti after the elections,” Professor Pierre-Louis says. “I think the role that the US will play in this term will be significant.”

By Isabeau Doucet and Ezra Fieser