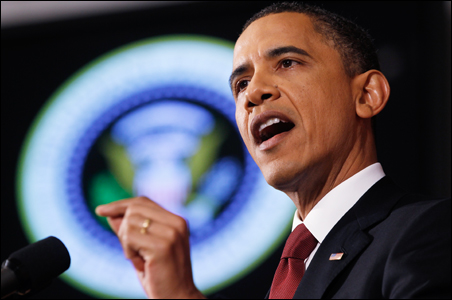 REUTERS/Larry Downing
U.S. President Barack Obama speaks about the conflict in Libya during an address at the National Defense University in Washington.

In a nationally televised address Monday evening, President Obama defended the US’s role in military operations in Libya, calling it limited yet successful. And he asserted that the US was acting in its national interest.

The president also announced that command of the operation, aimed at protecting Libyan civilians amid a popular uprising against the rule of Muammar Qaddafi, would finish a transfer from US to NATO hands on Wednesday. Recapping events to date, Mr. Obama said that the US-led coalition had struck regime forces in Benghazi, saving the city and its people; hit Colonel Qaddafi’s air defenses, paving the way for a no-fly zone; and cut off much of the regime’s source of supply.

“Tonight, I can report that we have stopped Qaddafi’s deadly advance,” Obama said.

Obama made clear that he was aware of the criticism that has rained on his head since the first US cruise missile struck Libya on March 19, following a UN Security Council resolution two days earlier that authorized “all necessary measures” except an occupation force to protect Libyan civilians. He attempted to frame his approach as a middle option – not hands off but also not doing “whatever it takes” to bring down Qaddafi and usher in a new government.

Still, in effect, the president laid out an effort that is aimed at regime change in Libya – though not by military means. On Tuesday, Secretary of State Hillary Rodham Clinton will go to London for a meeting with the Libyan opposition and for consultations with more than 30 nations.

“These discussions will focus on what kind of political effort is necessary to pressure Qaddafi, while also supporting a transition to the future that the Libyan people deserve,” Obama said. “Because while our military mission is narrowly focused on saving lives, we continue to pursue the broader goal of a Libya that belongs not to a dictator, but to its people.”

In his speech, Obama also ranged into ideas that might form a framework for an “Obama doctrine” – in effect, an approach to situations where US action is not imperative but desirable, in concert with the international community. These would be times, he said, “when our safety is not directly threatened, but our interests and values are.”

“Sometimes, the course of history poses challenges that threaten our common humanity and common security – responding to natural disasters, for example; or preventing genocide and keeping the peace; ensuring regional security, and maintaining the flow of commerce,” the president said. “These may not be America’s problems alone, but they are important to us, and they are problems worth solving. And in these circumstances, we know that the United States, as the world’s most powerful nation, will often be called upon to help.”

The American public is only modestly supportive of the Libya effort. A poll by the Pew Research Center released Monday found 47 percent of Americans say the US and its allies made the right decision to take military action in Libya, while 36 percent called it the wrong decision. Seventeen percent had no opinion. Usually, after the US commences military action abroad, there is a “rally around the flag” effect in public opinion. But the fact that less than half of Americans support the effort after such a short time shows that Obama needed to do more to make his case to the public.

There was also no clear partisan breakdown in opinion, Pew found. Among Republicans, 54 percent agree with the military action, while 49 percent of Democrats agree. Among independents, 44 percent say military action was the right step.

Sixty percent of Americans think US action in Libya will “last for some time,” versus 33 percent who say it “will be over pretty quickly,” according to Pew. This, despite efforts by Obama and his administration to convince the public that the operation is limited. The poll found that Americans also aren’t clear on the aim of the mission. Forty-six percent say it should include Qaddafi’s removal while 43 percent say it should only include protecting Libyan civilians.

Despite the lack of partisan divide among the public over Libya, congressional Republicans reacted negatively to the president’s speech.

“The president’s focus on NATO’s leading role in the operation offered no assurance that American military men and women as well as American resources will not continue to play a very large part in the days to come – bravely taking part in a mission the president has still not clearly defined,” Rep. Tom Price (R) of Georgia, chairman of the House Republican Policy Committee, said in a statement. “Ultimately, President Obama’s speech tonight did not undo the concerns raised by his handling of America’s involvement in Libya.”