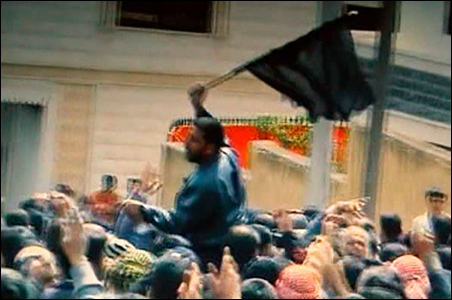 REUTERS TV
This still image from amateur video shows a mourner waving a flag amongst the crowds taking part in the funerals of protesters killed in earlier clashes in Deraa.

Unrest and violence in Syria spread to different cities this weekend as protesters took to the streets in what is becoming an increasing challenge to the rule of President Bashar al-Assad.

Activists say at least 30 people were shot dead by security forces as hundreds gathered in the southern settlements of Deraa and Sanamein on Friday, which have been focal points of unrest in the past week. The deadly clashes came just hours after a government official announced the president had ordered violence not be used against protesters.

On Saturday, four anti-regime protesters were shot dead in the Mediterranean port city of Latakia, according to activists. As the heartland of Mr. Assad’s minority Alawite sect, unrest there is likely to be of special concern to the government.

“After Friday and Saturday we can now say that what the Assad regime is facing is a grassroots uprising for democracy,” says Ammar Abdulhamid, a Syrian democracy activist based in the United States. “Momentum has spread.”

So far, protesters have refrained from calling for the toppling of Assad, but protests are gathering steam, fueled by a cycle of violence, misinformation, and small concessions on the part of the government.

Assad now faces a difficult choice, analysts say: Enact meaningful reform or crush the dissent with force. And his attempts thus far to balance those two opposing demands suggest that there are significant fissures within his government over which course to take.

“It seems like Assad is being advised to adopt mutually exclusive paths of being conciliatory and cracking down hard to deter protesters,” says Murhaf Jouejati, a Syrian professor at George Washington University. “This does show there are centers of power other than the president who see him as weak and are therefore adopting measures they deem superior.”

While some opposition activists say the window for negotiation has closed, analysts say two paths lie open to the Syrian government at what is rapidly becoming a defining moment in the country.

“The president needs to calm the situation by coming to talk to Syrians directly; to give them dignity by stopping the propaganda and show them he trusts them and will listen to their demands,” says Ayman Abdel Nour, a Syrian dissident who runs the All4Syria website from abroad. “He needs to announce meaningful changes.”

Proposed measures include a change in the government, lifting of the state of emergency, postponement of parliamentary elections due in May to redraft the Constitution, and a pledge to set up an independent inquiry into the recent deaths or protesters.

The other option, according to a report by the Brussels-based International Crisis Group released on Friday, is escalating repression, which “has every chance of leading to a bloody and ignominious end,” according to the report.

It is still unclear whether either option will succeed in ending unrest. “Making change is seen as a risky course because [protester] demands may increase,” says Mr Abdel Nour. “But with growing unrest, it is the only viable option left.”

What reforms is Assad willing to make?

Pledges announced by the government on Thursday night in an effort to stop Friday protests were widely viewed as too small — and they had been on the table in the past.

These included a commission to look into the lifting of the state of emergency and drafting new laws on political parties and a public pay rise. Anger has been further fueled by a governmental narrative that has pinned unrest on outsiders and armed gangs. Since Saturday, that narrative has taken a more sinister turn with the government suggesting that sectarianism is to blame.

On Saturday, Syrian authorities said Egyptian-American Muhammed Radwan, who was detained the day before, had admitted to “receiving money in exchange for sending photos and videos from Syria,” an accusation condemned by activists.

“The government has done well by offering condolences and freeing the children that sprayed [anti-government] graffiti,” says Prof. Jouejati. “But the more officials talk of a conspiracy, the less credible they become. And the more force they use, the more grievances they create.”

The magnitude of protests may not yet have reached the size to pose an imminent challenge to Assad.

Many in the country, especially from large minority sects of Christians and Druze, see Assad as ensuring stability. But the violence is posing a challenge to governments responding to a rapidly shifting region.

Damascus was largely isolated following the 2005 assassination of former Lebanese Prime Minister Rafik Hariri, which was blamed on Syria, a charge Damascus has aways denied. But the country has largely been brought into the international fold in the last four years. US ambassador Robert Ford arrived to Damascus last month.

On Friday, the US condemned “the Syrian government’s attempts to repress and intimidate demonstrators.” Syrian officials say 27 people, including 20 protesters, have been killed in clashes with security forces in a number of cities since anti-government demonstrations began over a week ago. Today they announced another 12. But human rights activists say the true figure is over 100.

Syria is already under sanctions from Washington; and it is unclear what further steps could be taken. While many Western governments dislike Assad, there are also fears that his overthrow could cause dangerous instability in the region.

“Many governments may be hopeful of the overthrow of the regime which has bolstered Iran and transferred weapons to Hamas and Hezbollah,” says one analyst in Damascus who spoke on condition of anonymity for fear of reprisal. “But there is a huge question mark over what would happen then.”

— Our correspondent could not be named for security reasons.