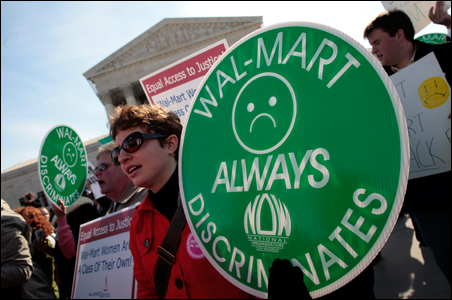 REUTERS/Larry Downing
Protesters hold signs in front of the Supreme Court while class action lawsuit Dukes v. Wal-Mart is being argued inside the court in Washington.

The US Supreme Court heard arguments Tuesday on a potentially massive discrimination lawsuit by female employees of Walmart. The court will decide whether the women’s allegations on pay and promotions should be treated as a class-action lawsuit, a key factor in determining the retailer’s financial exposure if it eventually loses in court.

With this high-profile case in the news, here’s a by-the-numbers look at how women are faring in the US economy in general.

Last year a female worker typically earned 81 cents for every $1 earned by a male counterpart, according to the US Bureau of Labor Statistics (BLS). That gap isn’t as big as it once was, but some researchers argue the rift reflects a big unequal-pay problem.

“Even after controlling for hours, occupation, parenthood, and other factors known to affect earnings, the research indicates that one-quarter of the pay gap remains unexplained and is likely due to sex discrimination,” contends the American Association of University Women Educational Foundation, citing evidence from women who graduated from college in 1992-93.

Gender gaps exist for full-time workers, according to that 2007 study, even in fields where women make up a majority of employees, such as administrative support.

In some occupations women out-earn men, the BLS finds. Food preparation and serving workers who are women earn 112 percent of what male counterparts earn. At the other end of the scale, women financial advisers earn 58 percent less than men in that field.

The recession hit men harder than women, in terms of unemployment. The jobless rate for women didn’t go above 9 percent, and now stands at 8.5 percent (below the national average of 8.9 percent in February). The positive news for men is that their jobless rate has come down to 9.3 percent, from a peak of 11.4 percent in late 2009.

Women held 36.5 percent of all managerial positions, including mid-level and senior positions, in 2009, according to the US Equal Employment Opportunity Commission (EEOC). That number is up from about 34 percent in 2000. Among senior-level officials and managers, 28 percent are women.

Sex-discrimination charges accounted for 29 percent of all charges filed with the EEOC in its 2010 fiscal year. That number held near 30 or 31 percent for the previous 10 years. In all, 29,029 charges of sex discrimination were filed in 2010.

5. Women in the workforce

Some 58 percent of women over age 16 are in the labor force (either working or seeking employment), versus a little over 70 percent of men. That’s at the high end of the spectrum for advanced industrial nations, but a bit lower than in a few nations such as Canada, Sweden, and the Netherlands (using 2009 numbers), according to BLS research.

6. Wives who out-earn their husbands

Among married-couple families in which the wife had earnings from work, 33 percent of the wives earned more than their husbands in 2006, the BLS reported in 2009. This includes cases in which husbands had no jobs as well as lower-paying jobs. That’s up from 24 percent in 1987.

In households where both spouses work, 26 percent of wives earned more than their husbands in 2006.