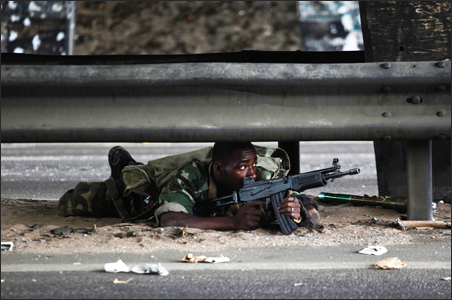 French-speaking Ivory Coast has been one of the most enthusiastic of any former French African colony, even retaining its colonial name. The residence of the French ambassador and that of the Ivory Coast president are on the same street.

But under the presidency of strongman Laurent Gbagbo, relations deteriorated to the point that yesterday, as French troops took the city’s airport to ensure safe departure of foreign nationals, Mr. Gbagbo finally played the “ugly colonialist” card.

This horrified some 12,000 French nationals, a number down from 40,000 a few years ago. The French embassy Sunday night was attacked by “patriotic youth,” according to Radio France International. And in Paris, Gbagbo envoy Alain Toussaint declared, “It is the French Army, which has put itself in the service of the rebellion … the French Army has become an auxiliary force of the rebellion.”

As of early Monday, Gbagbo had reversed his hard-line position, saying via state TV that his forces will “ensure the security of the French,” in spite of “France’s maneuvers intended to bring death in Ivory Coast.”

On Sunday, France sent 300 troops to Ivory Coast after an emergency meeting at the Élysees Palace, and today added another 150. Along with securing the airport, French troops tried to capture two bridges in Abidjan, a city of islands, that were linked to the airport, but were unable to after youth militia loyal to Gbagbo got there first.

Today, French citizens gathered in downtown Abidjan for their safety at the behest of President Sarkozy. Sarkozy later stepped up the action, and said that some 1,800 may be evacuated later today. The move came as the forces of elected president Alassane Ouattara launched attacks on the city in a final push to try to take control of the country, which has been in a ever-bloodier standoff over the refusal of Gbagbo to step down.

Mr. Ouattara has been in Abidjan under UN protection since winning a November election, and French troops, based in Ivory Coast for decades and numbering more than 1,500, have increasingly been criticized by Gbagbo for sympathy with his opponents. The international community, including US President Obama, has called on Gbagbo to leave, but he has refused, citing election irregularities in Ouattara’s north stronghold.

Ouattara has said it is essential for French forces to intervene on his behalf, in a reprise of France’s Libyan intervention. But France is unwilling.

Underneath the dispute between the two men lies a decade-long “Ivoirite” program by Gbagbo to frame Ivory Coast as a nation whose southern Christian region is made up of true Ivorians and is pitted against the north, mostly Muslims who are migrants and refugees.

France has been neutral over events in its former colony, and even played peacekeeper between Ouattara and Gbagbo forces in 2003. But the shooting of nine French peacekeepers in 2004 by Gbagbo forces caused views to change in Paris, and then-Prime Minister Jacques Chirac launched strikes that wiped out the Ivory Coast Air Force.

Ouatarra was prime minister in the early 1990s, serving in the regime of Felix Houphouet-Boigny; during that time, Gbagbo and his wife were arrested and tortured as a socialist opponents. Gbagbo holds Ouattara responsible for this.

On Sunday, Gbagbo’s Army chief of staff Philippe Mangou, who had defected to the South African embassy Saturday, reemerged and was seen on state TV attending a military conference with Gbagbo. Another defector, General Kassarate, was also seen on TV at the same conference. Ouattara’s officials declared the two men recanted because relatives were threatened.

For years, Ivory Coast was pro-French, with enormous penetration by French business, culture, and military, long after the rest of western Africa renounced its colonial past. Felix Houphouet-Boigny, the father of the state, was a minister in Charles de Gaulle’s government and only reluctantly went independent, saying he would prefer to be rich and dependent, rather than poor and free.

In 2000, Gbagbo was elected president and began accelerating his “Ivoirite” program. Ouattara himself was declared a noncitizen since his mother was born in Burkina Faso. The French were fairly nonpartisan on the question, but found Ouattara easier to deal with as Gbagbo’s religio-ethnic mission became more questionable. When Ouattara was elected in November, France and the international community backed him.