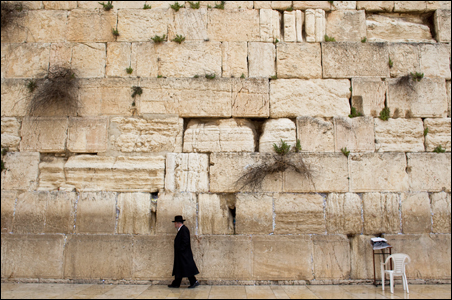 Rashad Zeid, a Palestinian farmer who lives not far from the bustle of Tel Aviv, once sold his crops to Israeli acquaintances – chatting with them in Hebrew as they paid for cabbage or cauliflower.

But now Mr. Zeid’s world ends abruptly at a high wall of gray concrete erected by Israel to protect its citizens against Palestinian suicide bombers. Just beyond the wall bordering his fields lies Kfar Saba, a Tel Aviv suburb of 85,000 that was once part of his customer base.

Nearly eight years after it was first erected, the controversial wall snaking through verdant fields and dusty hillsides has become a permanent fixture of the landscape. It has also cemented a psychological divide between Israelis and Palestinians, undermining the prospects for lasting peace that could not only end hostilities but boost economic prosperity.

Both sides understand that the multibillion-­dollar phalanx of electronic sensors, patrol roads, concrete slabs, and concertina wire could be removed under an eventual peace deal.

But by thwarting the daily interactions between people like Zeid and his customers, which until recently served as a crucial buffer against hard-line views of the “other,” the wall looms as an obstacle to peace – though not an insurmountable one.

“We want all the world to support us to get a settlement through peace,” says Nidal Jaloud, a municipal spokesman in Qal­qilya. “Whoever managed to bring down the Berlin Wall – which we all thought would never fall – will bring down this wall.”

Young men from Qalqilya and its surrounding suburbs once crossed into Israel daily for work, along with tens of thousands of Palestinian laborers throughout the West Bank. And Israelis would flood into border towns like Qalqilya on the weekends to bargain hunt in second-hand shops on a street nicknamed Alte Zachen, Yiddish for “old things.”

“Those days were beautiful,” recalls shopkeeper Mohammed Izzat. “There was a good life for us.”

Shlomo Madmon, a dovish Israeli activist from Kfar Saba, also speaks nostalgically about that time, when he would visit Qalqilya and a neighboring Palestinian village to purchase building materials and hire construction workers to build his home. “I felt like one of the family there,” he says.

In those days, Qalqilya and Kfar Saba were exploring a series of joint ventures. Mayors from the towns attended retreats together and talked about cooperating on an industrial park straddling the border and a medical center inside Qalqilya.

But then in September 2000 the second intifada (uprising) began, eventually killing more than 1,000 Israelis and four times as many Palestinians. Military officials have credited the “security fence” with a drastic drop in attacks inside Israel, and even dovish Israelis support its existence as an unpleasant but necessary measure absent a peace deal.

“For me it’s a scar…. It’s a reminder to me of the failure of this conflict to heal itself,” says Yossi Klein Halevi, a fellow at the Shalom Hartman Institute in Jerusalem. “On the other hand, as the father of two teenagers during the suicide bombings, I felt deep gratitude to the wall for keeping my kids safe. I think many Israelis have that ambivalence.”

Sign up for our daily World Editor’s Picks newsletter. The best stories, in your inbox.

Though the barrier hasn’t snuffed out the desire for Israeli-Palestinian cooperation entirely, it makes normalized ties nearly impossible.

“How can I have relations with the Israelis now when they are besieging me with a wall, and building settlements, and turning cities into cantons?” asks Mr. Jaloud, the Qalqilya municipal spokesman during the period of cooperation with Kfar Saba.

Palestinians dub the barrier an “apartheid wall” because it deprives them of access to land, jobs, basic humanitarian services, even family. They see it as a symbol of Israel’s military occupation – a view backed up by the International Court of Justice’s 2004 declaration that the barrier is illegal under international law.

Even after a surge in the West Bank’s economy over the past two years, municipal officials here complain of double-digit unemployment, stagnation, and Israeli military checkpoints.

On display in the stairwell of Qalqilya’s municipal building, architectural drawings depict a new complex of office buildings and retail stores. But the project remains an unfulfilled vision.

“The reason why there are no investors is because of the wall,” says Deputy Mayor Yacub Asfour. “What kind of investor wants to put money into a prison?”

About a half-mile west of the concrete wall that encircles Qalqilya lies Kfar Saba. Though the city’s shopping mall was targeted by suicide bombers during the second intifada, there were relatively few attacks in the Tel Aviv suburb.

Madmon, the activist from Kfar Saba, hasn’t been back to Qalqilya for years. He says he’s sorry about the economic hardship caused by the wall, but sees it as a necessary precaution.

“I understand [Pales­tinian] distress, but I also understand that I don’t want to see shopping malls filled with body parts,” he says.

Now that the wall has been erected, many residents seem less afraid – but also less likely to think about their neighbors on the other side.

“It creates a sense of disconnect that allows us to walk around without fear,” says Maayan Sagy, a young employee at a technology company in the Kfar Saba industrial zone who remembers weekend trips to Qalqilya as a boy. “That disconnect isn’t necessarily good.”

That’s why Yitzhak Vald, the former mayor involved in the partnership with the Palestinians, says he supports cooperation with Qalqilya.

“There can’t be a situation in which Qalqilya … will deteriorate and Kfar Saba will live as a flowering heaven,” says Mr. Vald, although he sees the wall as necessary to Israelis’ survival.

Indeed, a growing gulf between the neighbors could exacerbate tensions and potentially heighten the security threat.

At the farmer’s market in Kfar Saba, produce stand owner Effi Ganot portrays the Palestinians as “a lion in a cage,” and responds indignantly when asked whether the barrier should be dismantled. “There’s nothing bad about it. Why does the border need to be opened?” he says. “Why does the whole world have to be involved?”

Weekly protests against the barrier have drawn international sympathy in Palestinian villages like Bilin, where the Israeli army has failed to act on a court order to reroute the fence.

Casualties from those clashes – such as Jawaher Abu Rahma, whom Palestinians say died from tear gas in a January demonstration – are recognized as martyrs. And top officials from the Palestinian government, such as Prime Minister Salam Fayyad, have visited to endorse the model of “resistance” against the Israeli military occupation.

But such protests have largely failed to change Israeli policy. For many Palestinians, the wall seems a fait accompli. “As long as the West is supporting Israel, the wall will never come down,” says farmer Zeid, whose section of the wall – emblazoned with “Free Palestine” graffiti – once attracted a tide of foreign officials and reporters.

“I don’t believe in the Bilin model,” Zeid continues. “People are just getting hurt there. The only way [to remove the barrier] is through our religion – not through violence nor a peace agreement.”

The Israeli-Palestinian peace process has been overshadowed of late by the Arab unrest sweeping the region. But for both Israel and their partners in the Palestinian Authority (PA), the unrest has added urgency to both sides’ longtime quest for peace.

With Egypt’s ouster of former President Hosni Mubarak, Israel has lost an important regional ally for peace. Mr. Mubarak was instrumental in keeping a lid on Hamas, the Islamist militant group that runs the Gaza Strip. With Mubarak gone, Hamas-Israel tensions have escalated, bringing the worst cross-border violence since the 2009 Gaza war.

The PA, whose popularity was already flagging, is potentially more vulnerable due to the Arab spirit of uprising.

While Palestinians have yet to protest en masse, the example of their fellow Arabs elsewhere could embolden them to revolt against the PA if it doesn’t end Israel’s occupation. If the PA fails, Hamas – with whom Israel refuses to negotiate – could gain clout, posing a security threat to Israel.

The PA’s main strategy now is to build support for a United Nations declaration of statehood in September – whether or not Israel agrees.