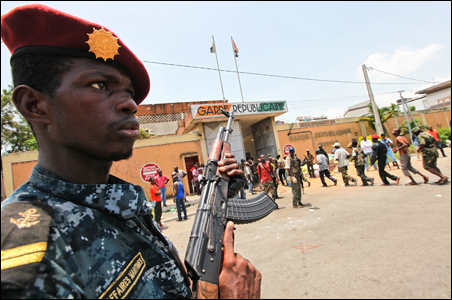 REUTERS/Luc Gnago
A soldier loyal to Ivorian President Alassane Ouattara watches as local recruits arrive at the former headquarters of the Republican Guard in Abidjan.

If ever there was doubt of a growing rift between African and Western leaders, it was made clear with the recent conflicts of Libya and Ivory Coast.

In both countries – where strongmen rulers unleashed their armies and police against opponents – Western leaders quickly called for international intervention to protect civilians, while many African leaders preferred mediation and complained of African sovereignty being trampled.

In Ivory Coast, African Union-led mediation failed miserably as renegade President Laurent Gbagbo plunged his country back into civil war before the United Nations asked French forces to intervene, leading to Mr. Gbagbo’s capture on Monday. And while Western allies continued to bomb forces loyal to Libyan dictator Muammar Qaddafi this week, the AU sent a five-nation team to Tripoli to hash out “road map” for peace that rebels have rejected.

The tensions resulting from the two approaches, though, are not merely between bossy rich Western nations on one side and African nationalists on the other. They exist within every African country, in a debate that poses the question: Can modern African societies be open enough to allow democracy, but strong enough to resist external political or economic domination?

“It is a very interesting conflict going on. The Ivory Coast issue has divided African public opinion quite sharply,” says Achille Mbembe, professor of history and politics at Witwatersrand University in Johannesburg, South Africa.

African anger at the West reached its sharpest point at the beginning of a French-led air attack on heavy weapons belonging to Gbagbo’s forces in Ivory Coast’s main city of Abidjan on April 4.

African Union chief Teodoro Obiang Nguema – who is also president of Equatorial Guinea – told a gathering of reporters in Geneva, “Africa does not need any external influence. Africa must manage its own affairs.”

Not only was UN action unwanted in Ivory Coast, it was also undermining AU efforts at mediation in Libya, Mr. Obiang said.

“I believe that the problems in Libya should be resolved in an internal fashion and not through an intervention that could appear to resemble an humanitarian intervention,” Obiang said. “We have already seen this in Iraq.”

Yet the larger debate between democracy on one hand and nationalism on the other is an old one, Mr. Mbembe says, dating to the colonial period, when Africans were fighting for self-determination.

“Africans wanted elections, but they also wanted to be free from foreign intervention,” he says. Freedom movements combined both of these two goals into a larger project to push out Western colonial powers. But once the colonial powers left, the liberal goal of democratic freedom gave way as newly formed African governments adopted an authoritarian style.

At a time when foreign investment is flooding into Africa – particularly from China, India, and Russia, but also from Britain, France, and the US – this authoritarian style, mixed with a touch of populist nationalism, can sometimes ring warning bells, as when South Africa’s ruling African National Congress (ANC) contemplates new rules to limit press freedom, and when ANC Youth League leader Julius Malema recently called for nationalization of all the country’s privately operated mines.

The power of nationalism

But nationalism is a powerful force in Africa because it is popular, Mbembe says, and the UN is not helped by the fact that “the history of foreign intervention has been negative throughout Africa, from the tragedy of [the killing of former Congolese President Patrice Lumumba in 1961] to the indifference shown during the Rwandan genocide to the UN force bombing the military in Abidjan.”

Even when African leaders are charged with human rights crimes – as Sudan President Omar al-Bashir and a half dozen Kenyan politicians are, in separate cases currently before the International Criminal Court – their fellow African leaders increasingly protest against an “unfair” intervention of “rich Western nations” in African domestic affairs, instead of standing firm for the principles of universal human rights and justice.

Yet there is no reason that democracy and self-determination have to remain at odds, Mbembe adds.

“It’s a false choice,” says Mbembe. “From 1960 to the end of the century, authoritarian governments in Africa have tried to convince people that these two things are not doable, and we should favor authoritarianism over democracy. But what we are seeing is people are going back to the original project in which democracy and self-determination shared equal space.”

Here in South Africa, the continent’s largest economy, the ruling ANC retains a firm nationalism at its ideological core, and it has pointedly marked out a foreign policy that is at odds with the West, and the US in particular.

While serving on the UN Security Council, South Africa used its vote to defeat a censure vote against the military regime in Myanmar (Burma) back in 2009, a move that horrified human rights activists.

During both the Ivory Coast and Libyan conflicts, South African President Jacob Zuma has personally traveled to both countries as part of AU fact-finding missions to explore possibilities for mediation, including power-sharing deals that would allow unpopular leaders to remain in power.

“At its core, the ANC saw nationalism as more important than human rights,” says Adam Habib, a political scientist and deputy vice chancellor of University of Johannesburg. But like Mbembe, Mr. Habib says “there needs to be a new alliance between human rights and nationalists. We get this question of development or democracy. It is not possible to have one without the other.”