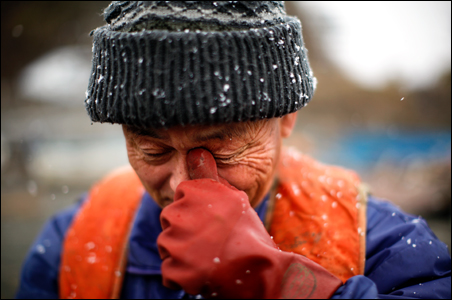 REUTERS/Carlos Barria
A fisherman reacts as he looks at his boat, which was destroyed by March 11’s magnitude 9.0 earthquake and tsunami.

When the 9.0-magnitude earthquake struck off the northeastern coast of Japan on March 11, fisherman Toshibumi Todokoro knew exactly what to do. He rushed to his 5-ton, 42-foot boat, the Daihiki-Maru, and took it as far out to sea as he could get.

The tsunami was 13 feet high when it hurled his boat around in the open water. By the time it had smashed into his home port of Hitachi, it had grown to almost 20 feet. Almost all of the 100 fishing boats from the port – the founding place of the multinational conglomerate that bears its name – made it out.

“All the water drained from the harbor as the ocean pulled back before the tsunami,” says Mr. Todokoro. “One boat sank down to the mud of the harbor floor and was then lifted back up as the wave came in.”

But while Todokoro’s boat was saved, he can longer use it to make a living. The government has banned fishing in Ibaraki Prefecture due to contamination of marine life after radiation from the stricken Fukushima Daiichi nuclear plant was released into the Pacific Ocean.

Indeed, as Tokodoro and millions of people in Japan begin to pick up the pieces of their lives, they’re finding the path to recovery is a long one. Delivery trucks for some businesses aren’t yet heading to some parts of the affected area, and even for the shops that are up and running, business is slow.

The large-scale dumping of radioactive water from the Fukushima plant has now stopped, according to the Tokyo Electric Power Company (Tepco), but for Todokoro and many other fishermen, the damage is done.

“The government has set the safe level for fish at 500 becquerels per kilogram. The kounago [an eel-like fish known in English as the young sand launce] that I catch are registering 580 becquerels,” says Todokoro.

“The catch is being tested every other day but the truth is that even if they are declared safe, nobody will buy fish from Ibaraki now,” he says. “Who knows how long it will be before people will want to eat fish from around here again.”

Todokoro has borrowed 1 million yen ($11,900) from the Ibaraki prefectural government to keep himself and his family going. He said this will last him about six more weeks. Tepco is set to make compensation payments to farmers and fishermen who have been affected by the crisis at the nuclear plant, but nobody seems to know when these will start arriving.

“I guess I could borrow more money when this runs out, but it has to be paid back at some point,” Todokoro says. “Maybe I should just move to an evacuation center. At least there I would get food and wouldn’t have so many bills to pay.”

The two cars that he left on the quayside when going out to save his boat were swept away by the tsunami, along with all the other vehicles and fishing equipment. The insurance company will pay him nothing because the event was a natural disaster. Now he faces ruin from the nuclear disaster occurring to the North.

Signs of life, but small ones

Forty miles of north of Hitachi, the city of Iwaki sits just outside the government’s 18-mile radiation advisory zone around the Fukushima plant.

The hundreds of rooms at the huge Hawaiian Spa Resort on the outskirts of the city are deserted. Building work is continuing on a new hotel at the hot spring and water park but there are no guests.

“The earthquake caused some damage, and that’s being repaired, but nobody will come here now anyway. Even the trucks that deliver supplies won’t come. The drivers are scared of radiation,” says a security guard inside the resort.

Just up the road, the newly reopened Kashiwaya Japanese sweet shop is empty of customers except for an old man sipping on the free green tea. The beautifully packaged sweets and rice crackers sit perfectly arranged in the shop’s gleaming interior.

“We reopened on April 11 [exactly a month after the earthquake and tsunami struck], but there are no tourists around because of the nuclear power station,” says Yasuhito Katou, the regional manager of the company that runs the shop.

“We used to get over 600 customers a day; today we’ve had 55. A lot of people usually come in from the Hawaiian resort, but it’s a family place. Nobody is going to bring their children here at the moment,” says Mr. Katou. “The staff and the local people aren’t worried about the radiation around here, but I understand how people from outside feel.”

Two carloads of men in overalls arrive and stock up on sweet beanpaste cakes before hurrying back to their vehicles. They are workers from Tepco, the operator of the nuclear plant, now the shop’s only regular customers.