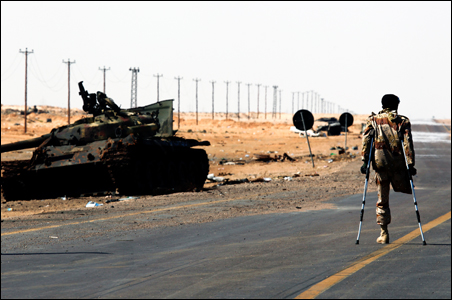 REUTERS/Yannis Behrakis
A rebel fighter with an amputated leg walks along the front line at the western entrance of Ajdabiyah.

You think you have a tough job? How about restarting a nation after its second civil war in a decade; convincing several private militias to lay down their arms; and persuading feuding politicians to stop exploiting ethnic, regional, and religious hatred that has built for decades?

That’s what Ivory Coast’s president-elect, Alas­sane Ouattara, faces in coming weeks and months to move beyond fighting that has killed hundreds and displaced more than a million in a bid to oust former President Laurent Gbagbo, who was finally captured Monday after refusing to step down since losing the Nov. 28 vote.

To put the once-prosperous West African nation back together, the former International Monetary Fund technocrat will have to prioritize reconciliation, rebuild institutions, and jump-start the country’s stagnating economy. But first, experts say, he will need to gain firm control over the rival militias that could derail all other efforts.

“What he needs to do as president is fairly clear, but whether he can gain actual power throughout the country is perhaps more important at this stage,” says Richard Moncrieff, a West Africa expert and researcher at the South African Institute for International Affairs in Johannesburg. “There’s a whole shopping list of things he has to do, but the first thing is to establish that he has effective rule and reduce the destructive capability of armed groups from both those who support Gbagbo and those who support Ouattara himself. You have to create enough space that you can govern.”

Creating that political space, indeed, is the first priority of any leader taking over a country in the aftermath of civil war, and there are plenty of examples of leaders on the African continent who have done either a good or bad job of this, and sometimes both. There is no single model of postconflict transition that works in every country, and no single country that has had an entirely positive experience worthy of being a model. Yet development experts say that Ivory Coast can take lessons from other African countries that have emerged from civil war, and returned to a kind of normalcy.

“In terms of democracy, a number of states have clearly agreed that Ouattara won the elections and he’s the rightful leader of Ivory Coast, so there’s no question of his legitimacy,” says Comfort Ero, Africa director for the International Crisis Group in Nairobi. “But although Ouattara has received international support and the support of a majority of voters, now the biggest concern after the violence of [the past few weeks] is that his presidency is going to be blood-stained.”

How Ouattara handles the aftermath of the Gbagbo presidency – offering amnesty, exile, or reconciliation instead of retributive justice – can set the tone for his presidency, and determine whether Ivorian society moves to the next step of national cohesion or remains deeply divided along ethnic and political lines. “This is an immediate concern for Ouattara, to rescue his own presidency,” says Ms. Ero.

The key is setting a conciliatory but strong tone, says Muthoni Wanyeki, executive director of the Kenyan Human Rights Commission in Kenya’s capital, Nairobi. “The first thing they have to do is guarantee that this does not happen again,” she says. “Ouattara needs to reform the electoral system, and also the security sector, and the constitutional court.”

Kenya, too, had elections that were disputed, Ms. Wanyeki adds, where the two main parties claimed victory and unleashed violence against each other. But from the Kenyan experience, Kenyan rights groups were able to investigate allegations of abuses from all sides, and even by the police and security agencies themselves, she says. “It is really important, in order for healing to take place, to create a national understanding of what happened to everyone,” Wanyeki says. “Everyone’s experience of violence tends to be personal, but people need to see that the whole country was affected, but in different ways.”

Koffi Kouakou, an Ivorian political scientist at Witwatersrand University in South Africa, says that Ouattara’s first priority will be to choose a political and technical team to manage the transition. In the midterm, he will need to start tackling the issues that have divided the country in the first place: the newly created split between a mainly Muslim north and a mainly Christian south; between elites who own the country’s resources, and those who don’t; between armed factions that are united only when they face one another, but often fragment into ill-disciplined militias when left alone.

But Ouattara’s greatest challenge will be security, says Moncrieff. “Just to start with disarmament, you’ve got to do deals with a lot of … armed groups.” Ouattara must merge the best-trained and least-tainted members of opposing armies into a single force. Doing that, he says, will create many more enemies since he will be taking away power from people on both sides of the conflict. “In reality, what he has to do is survive the first 12 months.”

What Ouattara will have to do to reunite, rebuild Ivory Coast