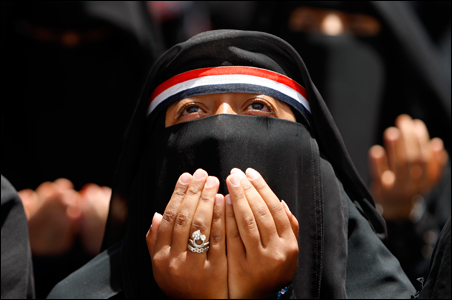 REUTERS/Ammar Awad
A woman prays during a rally to demand the ouster of Yemen’s President Ali Abdullah Saleh, outside Sanaa University.

Yemeni security forces and plain-clothes gunmen opened fire on thousands of demonstrators marching through Sanaa Sunday night, leaving at least 15 wounded from live ammunition, according to doctors at the field hospital. Hundreds more were treated for the effects of acute tear gas inhalation, spilling out from the grounds of the makeshift clinic.

“There were thousands of us marching peacefully when baltageya [thugs] and the military opened fire on us from the street and rooftops,” says Mohammad Ali Al-Sanari, who was being treated after security forces beat him with clubs.

The chaotic scene at Sanaa’s protest area comes amid more than two months of political deadlock that has threatened the country’s stability. More than 100 people have been killed since protesters began demanding the president’s departure in January.

But equally threatening to Yemen’s security may be the rapidly deteriorating economy.

Yemen is the poorest country in the Arab region, with nearly half of its 24 million people living below the poverty line. More than 35 percent are unemployed. With attention currently diverted to politics, the nation’s already frail financial situation appears to be crumbling. With antigovernment protests continuing to grow each week, some believe that the effects of the unraveling economy could push Saleh closer to departure.

“The economy is in the midst of a major crisis, and as soon as the political exigencies that are causing people not to focus on it disappear, then the economy will be the main issue,” says Abdul Ghani al-Iryani, an independent Sanaa-based political analyst.

Since January, foreign exchange reserves have fallen 13 percent, according to the central bank.

Morover, the value of Yemen’s rial has plummeted in recent months. While the rial is officially pegged at 216 to the dollar, hundreds of exchange shops throughout Sanaa are trading rials at rates of more than 240 per dollar because of the lack of foreign currency, traders say.

It is widely speculated that the massive pro-Saleh rallies and loyalist encampments scattered throughout the city are being directly funded through the governmental budget.

“The problem is that we don’t have solid economic foundations, meaning that the reserve of the central bank isn’t necessarily controlled by the central bank but by the president’s administration,” says Sanaa University economics professor Ali Saif. “Therefore, taking money from the reserve cannot be opposed or even observed because of the lack of institutional structure, which makes spending unofficial. It’s impossible to trace the flow of money.”

While official signs of economic trouble prove elusive, the effects are beginning to appear in the streets.

Throughout the capital, Yemenis wait days on end to refill cooking gas canisters. Restaurants throughout the city have shut their doors as a result of the gas shortage.

Queues at gas stations stretch for blocks. Many have run out of fuel.

“Oil production has dropped 120,000 barrels per day and we’re now importing,” says Mr. Iryani. “We have a huge drop in income from oil.”

Yemen’s oil reserves, anticipated to run dry within five years, account for roughly 60 percent of government revenues and 90 percent of import revenues, according to the International Monetary Fund.

With antigovernment protests continuing to grow each week, some believe that the effects of the unraveling economy could push Saleh closer to departure.

“There are still some people that don’t care about politics,” says Mohammed al-Said, a demonstrator from the southern port city of Aden. “But when they can’t afford cooking gas and food, that will be the beginning of a real revolution.”

Further complicating Yemen’s economic situation is the rise in global food prices. According to the World Food Program (WFP), staple products such as vegetable oil, rice, and wheat have risen by 11, 22, and 45 percent respectively since March.

“We’re not saying that suddenly now there’s a food crisis – we’re saying there has been one for years,” says Gian Carlo Cirri, Yemen’s WFP representative.

According to Mr. Cirri, 12 percent of the population – roughly 3 million people – are already more than 500 calories short of minimum nutritional standards. Long before the country’s political uprising, Yemen was classified as an emergency location by WFP.

“The challenges that Yemen is confronted with are so many and so deeply rooted that there will be a need for this political crisis to be overcome very quickly so they can start tackling those issues,” Cirri adds.

Mounting pressure for a resolution

But Saleh has remained defiant in the face of calls for his resignation. Negotiations with opposition groups that began weeks ago have failed to achieve tangible results.

Saleh has publicly expressed willingness to transfer power, but has yet to indicate how or when a handover would take place. Protesters say they will accept nothing short of the president’s immediate departure.

As violence and the threat of economic collapse continue to increase, Saleh’s administration has come under mounting pressure to determine a swift resolution to the stalemate.

On Sunday, delegations from the ruling party and the Joint Meeting Parties, Yemen’s coalition of opposition parties, traveled to Riyadh for Saudi-led discussions mediated by the Gulf Cooperation Council. The talks ended no closer to achieving a solution, said a government official familiar with the situation.

As Yemenis run low on gas and food, revolution could take off