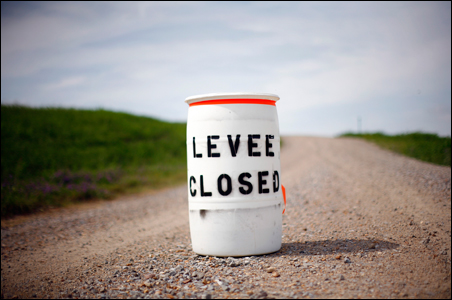 REUTERS/Eric Thayer
A barrel warns of a closed levee near a rising Mississippi River in Gillett, Arkansas.

The precise damage to economic activity is still uncertain, since the floods have not yet crested in key areas such as Baton Rouge. The impact could end up being relatively small in the context of the economy of the region and nation.

But for farmers, businesses, and individuals who have been directly affected, the costs are already significant.

The most expensive effects include: crops lost or threatened, casinos shut down for weeks, and a mighty aquatic highway temporarily closed to freight.

$2 billion in damage to farms

“The impacts are pretty large,” he says, since much of the land near the river is agricultural – used for farming catfish, cotton, and grains such as corn, wheat, soybeans, and rice. And the flooding has spanned a large region encompassing parts of Missouri, Tennessee, Mississippi, Arkansas, and Louisiana.

Still, for all the thousands of acres at risk, these affected lands are just a piece of a much larger US farm industry. Flooding could add to upward pressure on food prices, but not in a way that’s visible at the grocery store.

“It’s just not as much land devoted to crops as, say, the Corn Belt,” says Professor Riley. The problem, he says, is that this comes as grain supplies are already tight and food prices already high.

Even as floods ravage Mississippi, where Riley predicts as much as $800 million in damage, areas like the Texas Panhandle are struggling with drought. And in the Corn Belt surrounding Nebraska, recent rains have delayed spring planting, which can result in smaller crop yields.

Riverboat casinos will take a heavy hit, as will state tax revenues associated with it. Nineteen casinos in Mississippi will be closed for an expected six to eight weeks, says Sohini Chowdhury, an economist who tracks the Mississippi economy at Moody’s Analytics in West Chester, Pa.

That means some 13,000 people temporarily out of work, collecting unemployment benefits rather than paychecks. It also deprives the state of $14 million for each month that the casinos are shuttered, Dr. Chowdhury says. Louisiana and Tennessee also have casinos affected by the floods. Although the affected casinos are typically floating riverboats, which should survive the floods, surrounding businesses and infrastructure could be damaged.

Impact on businesses and homeowners

Businesses and homeowners in flood zones – notably Memphis, but also smaller communities along the river – are also feeling the impact.

River barge traffic – typically responsible for transporting billions of dollars of crops and merchandise each day – faces slowdowns, although these could be short-lived.

Some commodity experts warn of possible slowdowns in the region’s oil refinery operations.

Repairing or rebuilding damaged homes and businesses could stretch into next year or even 2013, in parts of Memphis and other river communities.

In all, the flood damage known so far isn’t big enough to change the economic forecast for the region, Chowdhury says. But it’s still early.

“The flood is still moving southwards,” she says. “Everything depends.”

Floods will not crest in Louisiana before the weekend. Until they crest, questions remain: Will the levees hold? Will officials open the Merganza Spillway near Baton Rouge? That move would protect the city by putting nearby communities and farmland under water.

The floods also come as the government’s flood insurance program is up for review in Congress. Some lawmakers, citing the program’s recurring deficits, say the job of flood insurance should be handed over to states.

Farmers typically have crop insurance, so private insurance firms will bear much of the cost of agricultural losses.

As commodities traders try to gauge the effects of the floods and other recent weather on grain supplies, the US Department of Agriculture gave a forecast Wednesday that was more upbeat than expected. The USDA news helped corn and wheat prices fall in Wednesday futures trading.