Federal Reserve Board chairman Ben Bernanke, in his toughest words yet, warned Congress Tuesday that it has to act “in a timely manner” to reduce the federal budget deficit.

Mr. Bernanke, however, did not weigh-in on the most intractable part of the problem – whether to raise taxes or cut government programs. Republicans want to cut spending but not necessarily raise taxes. The Democrats want to raise taxes on the wealthy on top of some spending cuts.

With the parties embroiled in this impasse, the nation is quickly coming to a point – on or about Aug. 2 – where the government will not be able to fund its on-going operations or pay its debt. 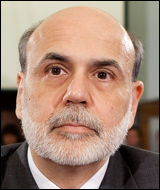 Bernanke warned lawmakers that playing a game of chicken in the showdown over whether to cut programs or raise taxes by failing to increase the federal debt ceiling is a mistake that could cause “severe disruptions in financial markets and the payments system.”

In fact, Bernanke warned that if Congress failed to act, over the long term it could hurt the value of the US dollar and the trust other nations and investors have in US Treasury securities.

“Interest rates would likely rise, slowing the recovery and, perversely, worsening the deficit problem by increasing required interest payments on the debt for what might be a protracted period,” Bernanke said. He was addressing a combination of lawmakers and budget experts at the annual conference of the Committee for a Responsible Federal Budget in Washington.

Bernanke said he could understand using the deadline to force some “necessary and difficult” policy decisions. But, he added, “the debt limit is the wrong tool for that important job.”

The Fed chairman’s warnings follow announcements by most of the ratings agencies that they would be forced to downgrade the creditworthiness of the US government if Congress fails to raise the debt ceiling limit and rein in the deficit.

But Bernanke was more blunt than the rating agencies, pointing to the turmoil that has enveloped Greece, which is struggling to pay its debts. Because of concerns that investors will lose money on its debt, Greece is practically cut off from the financial markets and its debt is carrying interest rates of 17 percent. Comparable US government debt is paying 3 percent.

“As we have seen in a number of countries recently, interest rates can soar quickly if investors lose confidence in the ability of a government to manage its fiscal policy,” he stated.

The Fed chairman, who was appointed by President Bush, called for what he termed “fiscal sustainability,” basically a budget that is at least balanced, not running in the red. The budget deficit this year is projected to be $1.5 trillion, or 9.8 percent of Gross Domestic Product.

‘Status quo is not an option’

“Perhaps the most important thing for people to understand about the federal budget is that maintaining the status quo is not an option,” he said.

Although it’s not unusual for Fed chairman to comment about the budget deficit, outside Fed observers said this is one of the strongest statements so far.

“It’s a good shot across the bow,” says John Canally, chief economist at LPL Financial, an investment adviser, in Boston, Mass. He notes that Bernanke has said if Congress is able to cut the deficit it would give him the flexibility to keep interest rates low for a longer period of time.

Next week, the Federal Reserve Board meets to set short-term interest rate policy. Bernanke is expected to hold a press conference after the meeting and Mr. Canally says he expects the Fed chairman will be asked more about fiscal policy than monetary policy at his press conference.

Canally says Wall Street would be disappointed if Congress merely passes a series of short term measures extending the debt limit by just enough money to keep the government funded.

“If they come up with a credible plan to cut spending by $2 trillion, that would be a plus for Wall Street,” he says. “But, the worst case scenario is if they just kick the can down the road.”

In his address, Bernanke said the federal budget should reflect the nation’s priorities “by providing the conditions to support ongoing gains in living standards and by striving to be fair to current and future generations.”

Bernanke appeared to send mixed signals on tax cuts. On the one hand, he suggested “reform” of the government’s tax policies by increasing the incentives to work and to save, encouraging investment in the workforce and stimulating private capital, all language that often used by those proposing tax cuts.

But Bernanke also suggested that reducing taxes would be insufficient in addressing the country’s fiscal problems.

“We cannot reasonably expect to grow our way out of our fiscal imbalances, but a more productive economy will ease the tradeoffs that we face,” he concluded.

Ben Bernanke: Deficit must be cut, but debt limit ‘the wrong tool’