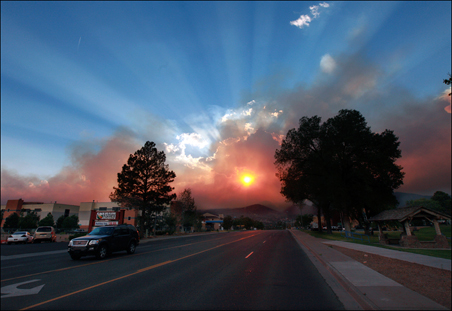 REUTERS/Eric Draper
The Las Conchas blaze, whose cause is still under investigation, is about 3 percent contained.

Firefighters battling the 70,000-acre Las Conchas fire south and west of Los Alamos, N.M., may get modest help from the weather Wednesday night.

So far, fire officials report that the blaze, well into its third day, has destroyed about a dozen homes in Los Alamos County. As of noon local time, officials said the fire had not yet reached the Los Alamos National Laboratory – a 23,000-acre complex that sprawls across several narrow mesas and canyons some 25 miles northwest of Santa Fe.

A one-acre spot fire broke out in a remote location along the lab’s southern border on Monday, but was quickly doused.

The Las Conchas blaze, whose cause is still under investigation, is about 3 percent contained, according to Los Alamos fire chief Douglas Tucker.

Firefighters are focusing much of their attention on lines of burning forest that are closing in from the west and from the south.

Firefighters have been setting controlled fires ahead of the Las Conchas fire’s front, to deprive the blaze of fuel should it continue to approach the lab. And they are poised to attack spot fires that can pop up anywhere from half a mile to a mile ahead of the main front.

Of special concern is a location dubbed Area G, which hosts roughly 20,000 steel drums filled with so-called transuranic waste – low-level waste ranging from contaminated log books and papers to tools and gloves used by workers at the nuclear-weapons lab. The above-ground site at Area G is a holding pen for material that is scheduled to be shipped to a low-level-waste dump in southern New Mexico.

“There are no ingots of plutonium there,” says Terry Wallace, and the lab’s principal associate director for science, technology, and engineering.

The nearest section of wildfire is just over three miles away from the waste site. Still, workers have cleared brush and other fuels from a large – and growing – stretch of land around the site, in case the situation worsens.

In recent days, some 350 firefighters have been attacking the blaze. That number is expected to mushroom to around 1,000 firefighters by the end of Wednesday as more crews arrive.

The US Environmental Protection Agency has provided a flying lab to monitor air samples. Of keen interest is whether the fire could liberate radioactive particles, trapped in soil or taken up by vegetation during the lab’s early days, and sweep the particles up in smoke plumes.

In addition to the EPA’s flying lab, Los Alamos scientists have a network of more than 60 monitoring devices in the region, several of which were added during the fire, to track air quality and any unexpected changes in radiation levels.

So far, “what we see in this fire is exactly what we see in any fire across New Mexico,” says lab director Charles McMillan, whose team of Los Alamos scientists performed preliminary analysis on smoky air specimens Tuesday night. “There is no additional material in the samples from lab activities or from our waste-management activities.”

While no evidence has yet emerged for smoke-borne radiation releases from lab activities during this fire, past research at the lab has shown that intense fires can liberate radioactive particles associated with the decay of naturally occurring radon gas.

Following the Cerro Grande fire in 2000, Los Alamos scientists detected elevated levels of this naturally-occurring radiation. The team estimated that the added radiation exposure amounted to something akin to the dose a passenger receives on one airline flight.

Because public interest has centered on potential radiation releases from the lab’s activities, the analysis focused on isotopes one might expect to see from lab-related work.

More-detailed analyses, which would include a hunt for increased radiation levels from natural sources, are likely to come later, lab researchers say.