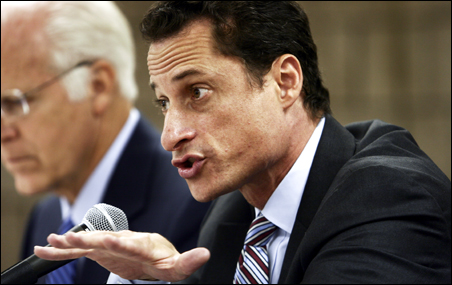 The downside is that, for the moment at least, Congressman Weiner is answering question after frenzied question about one particular tweet – a lewd picture from the waist down of a boxer-clad man, sent from his Twitter account to a young follower who is not his wife. He says he did not send it and has hired an outside firm to help find out how his Twitter account was hacked or spammed.

For Congress, which has embraced Twitter in the wake of President Obama’s success with social media, it is a potentially sobering lesson.

“After all the enthusiasm from the 2008 election about the new social media, this is the kind of thing that will put a little chill into the atmosphere for members who are using this,” says Julian Zelizer, a congressional historian at Princeton University in New Jersey. “It’s a reminder that technology can very easily be turned against them.”

More than 70 percent of the current Congress tweets – 156 Democrats, 229 Republicans, and two independents, according to TweetCongress.

“If it is a hacker, it will show to legislators how easy it is to put a politician in a media frenzy by tapping into someone’s account and sending out a picture, a statement, who knows what else,” adds Professor Zelizer. “When there is a scandal like this, politicians tend to remember it. They will think twice about this.”

The media hordes have been hard to miss. “I didn’t send this photograph,” Weiner told a scrum of reporters who converged on him just off the House floor. “I was tweeting about a hockey game at the time. I deleted it.”

Known for his edgy comments and fiery rhetoric, Weiner’s selective responses to media questioning has dialed up the pressure on him. “Maybe it will turn out that this is the point of Al Qaeda’s sword,” he quipped about the mysterious origins of the tweet.

Pressed further, the seven-term lawmaker declined to answer questions on whether, in fact, the photograph was of him. Had it been manipulated? Had he asked authorities to investigate? “At some point, you’ve got to draw a line,” he sighed, refusing to elaborate.

But stories are not easy to cut off once they gain momentum. Former Rep. Christopher Lee (R) of New York resigned just hours after a shirtless photograph that he posted on a dating website went public. He later apologized to his wife, family, and constituents for “profound mistakes.” His successor, Rep.-elect Kathy Hochul (D) of New York, was sworn in Wednesday.

Twitter scandal: a mess for Anthony Weiner, a lesson for Congress