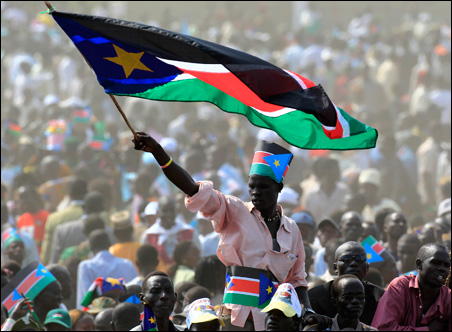 REUTERS/Thomas Mukoya
The Republic of South Sudan rang in its status as the world’s newest country.

The Republic of South Sudan rang in its status as the world’s newest country this weekend with a series of spontaneous and orchestrated celebrations of what President Salva Kiir called “a dream come true.”

On Saturday, tens of thousands of southerners flocked — some even ran in their high heels and dress clothes — to a fitting site for the main independence ceremony: the burial grounds of their fallen hero and former leader, Dr. John Garang.

“We were bombed, maimed, enslaved, treated worse than a refugee in our own country, but we have to forgive, although we will not forget,” Mr. Kiir said in his speech to the masses, a couple hours after he took the oath of office as the first elected president of the South Sudan.

At moments during the day-long ceremony, it was clear that some citizens of the fledgling country could hardly contain their joy.

Cries of “Hallelujah!” and “Freedom!” rang out and rippled through the crowd. Some jumped into the air and roared with delight as the southern flag reached the top of a towering flag pole, symbolic of the accession of the new state to the international community.

The United States and Britain were among the first nations to recognize Africa’s 54th country.

“My country, too, was born amid struggle and strife on a July day,” US Ambassador to the United Nations Susan Rice told the teeming and sweaty cround on Saturday. “On this day, the world’s oldest democracy welcomes the world’s newest state.”

“Independence was not a gift you were given. Independence is a prize you have won,” Ms. Rice said. “Yet even on this day of jubilee we remain mindful of the challenges that await us. No true friend would offer false comfort. The path ahead will be steep … but the Republic of South Sudan is being born amid great hopes.”

Mr. Bashir, who is wanted at the International Criminal Court for war crimes, struck an unusually conciliatory tone at the ceremony, urging the two Sudanese states to “overcome the bitterness of the past.”

As South Sudan’s capital, Juba, was rocked by celebrations, international and local concerns over the insecurity along the North-South border and all-out hostilities between northern troops and southern-allied forces in the northern state of Southern Kordofan were pushed aside for the day. But UN Secretary General Ban Ki-Moon stressed in his remarks that the northern and southern governments still had many issues to resolve about the future of their relationship.

The southern president acknowledged the challenges ahead for the new country, telling his citizens to remember that they are “southerners first” as they work together to build a nation from the south’s diverse ethnic groups. He asked for the southern militias currently challenging the army in the south’s oil-producing region to lay down their arms and “join us in this young nation.”

Kiir also pledged that his government would rise to the challenges that come along with statehood.

“Starting from today, we’ll have no excuse or a scapegoat to blame,” Kiir said. “As an independent country, we must focus on the process of service delivery and development.”

Optimism, despite the obstacles

“There’s still room for optimism for South Sudan,” Eddie Thomas of the Rift Valley Institute told the Monitor. “It’s more peaceful today than it has been for most of its post-colonial history – and for that matter, most of its colonial history.”

On one of the new billboards towering over one of Juba’s main streets, the message reflected the solidarity among southerners that has been a theme of the independence celebrations: “We have suffered together, we are now free together.”