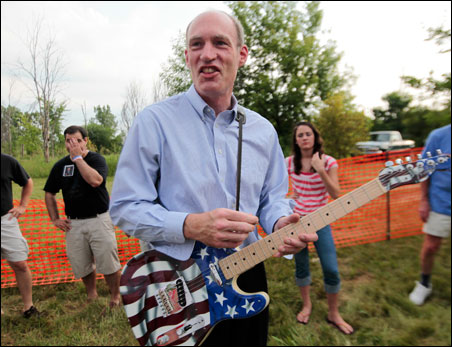 REUTERS/Rebecca Cook
McCotter is the third House Republican running for president, joining US Reps. Michele Bachmann of Minnesota and Ron Paul of Texas.

Thaddeus McCotter, a US Representative from Michigan whose agenda appeals to tea party activists, announced his bid Saturday to win the Republican presidential nomination.

Rep. McCotter champions lower federal taxes, energy independence from foreign sources of oil, he is against illegal immigrants receiving government benefits and he endorses the concept of American “exceptionalism” regarding foreign policy.

His candidacy promises to be unorthodox compared to the growing field of competitors in his party.

McCotter launched his campaign at a rock festival in Whitmore Lake, Mich. and later demonstrated his lead guitar skills onstage. His musicianship is key to helping generate attention: He is often pictured with his guitar in hand and has performed at appearances, such as Mike Huckabee’s Fox News television show, where policy discussion and fret shredding are inseparable.

Musical pedigree aside, McCotter’s connection to the automotive industry is likely to give his economic agenda merit.

He lives in Livonia, Mich., and he represents a suburban district outside Detroit. His seat on the House Financial Services Committee is credited for helping restructure General Motors Co. and Chrysler Group, rescuing both companies from bankruptcy through government loans.

“If you believe American needs manufacturing and farming, that is going to be a message you will hear,” he told the Detroit News Friday.

McCotter says he supported the federal government’s hand in helping both companies recover and adds that their restructuring can be used as an example of what can be done to Social Security and the banking system.

“If you continue to raise taxes, if you continue to massively increase government, you are crushing the chances of a recovery…. The White House should finally get the message that we are not going to make this recession worse, we’re not going to make it harder for people to recover, we want to fix and restructure government starting with the debt ceiling,” he told Huckabee on his show last weekend.

McCotter has been critical of the federal bank bailout, saying that it didn’t result in stimulating the economy unlike the automotive industry recovery, in which domestic automakers added jobs and jump-started profits.

“Here we were giving $300 billion to the people who caused the problem…. There’s something inequitable about that, and something needs to be done about it now,” he told the Livonia Observer Friday.

He is organizing in Iowa, which holds its caucuses Feb. 6, as well as New Hampshire, which holds the first primary Feb. 14.

While rank and file Republicans traditionally vote in the New Hampshire primary, Iowa tends to attract caucus goers more open to candidates not necessarily from the mainstream.

According to a recent poll conducted by the Des Moines Register, 69 percent of Republican voters in Iowa say they are open to voting for a candidate who is not their current first choice.