A spate of London riots and looting, sparked by the fatal shooting of an alleged gangster, have posed a serious test of Britain’s policing capability just 12 months ahead of the 2012 Summer Olympics. It has also raised questions about the social impact of Prime Minister David Cameron’s five-year austerity plan to dramatically cut back government spending – a plan aimed at bolstering Britain’s economy amid a European economic crisis. 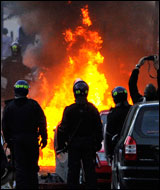 Parts of London cleared up today after some of the worst civil disturbances in the capital for more than 25 years, which began Thursday night after police shot dead a local man in racially mixed Tottenham. The impoverished inner-city area of north London was the scene of race riots in 1985 during which policeman Keith Blakelock was murdered by a mob.

Riots and looting, some of which police said was just plain criminality, spread to other London suburbs over the weekend. London police officials tripled the number of officers on the ground from Saturday to Sunday night, and Deputy Assistant Commissioner Stephen Kavanagh said there would be a third more officers on the ground this evening.

As police have struggled to contain the violence, Britain’s conservative Tory government has come under fire for leaving the country vulnerable to such violence in the first place.

“The economic stagnation and cuts being imposed by the Tory government inevitably create social division,” said former London mayor Ken Livingstone, blaming the government’s austerity measures. “As when Margaret Thatcher imposed such policies during her recessions, this creates the threat of people losing control, acting in completely unacceptable ways that threaten everyone, and culminating in events of the type we saw in Tottenham.

“Tories will issue knee-jerk statements demanding support for the police but they are actually cutting the police,” he added. “That amounts to pure hypocrisy.”

However Tony Travers, a local government expert at the London School of Economics, played down police budget cuts or recent resignations at the top of the Metropolitan Police – including commissioner Sir Paul Stephenson in the wake of the Murdoch phone-hacking scandal – as factors.

He said: “There are still very able senior officers at the Met who are more than capable of dealing with disturbances like the weekend but perhaps on this occasion intelligence wasn’t what it could have been.

“Undoubtedly, senior officers will be looking ahead to the Olympics in exactly 12 months time and wondering how they will cope if similar events unfold then when they’re dealing with security and overseeing visitors from around the world,” he added. “I think that will be a great concern at the moment.”

London Mayor Boris Johnson, Mr. Cameron, his Home Secretary Theresa May, and Tottenham borough police commander Detective Chief Superintendent Sandra Looby were all on vacation when the riots erupted. Mrs. May cut short her holiday today to fly home and deal with the crisis. Mr. Johnson and Ms. Looby are reportedly also on their way home.

First reports of Thursday night’s shooting said that a Tottenham man named Mark Duggan was armed and shot at officers when they confronted him near the Broadwater Farm housing estate where he lived.

However family and friends disputed that, saying he was neither a gangster nor armed, and urged locals to protest outside Tottenham Police Station on Saturday evening, demanding answers. But after a silent vigil which started at 5:15 p.m. failed to elicit a response inside, the mood became darker. Gangs of youths, some in their early teens and dressed in “hoodies” and baseball caps, arrived to swell the numbers.

Local gangs in the borough of Islington – including the local Star Gang of which Duggan was said to be a member – dropped their usual rivalries and joined together to attack police lines, spurred by social networking on Twitter and Facebook.

Shops were looted and burned as police concentrated on containing the violence rather than intervening to protect property. Last night flame-scarred Tottenham was quiet under a heavy police presence but there were outbreaks of violence in other areas, such as Enfield, Brixton, Fulham, and Dalston, with stone-throwing and looting which police said was just criminality.

Tonight trouble was reported in the boroughs of Hackney and Lewisham with a total of 215 people arrested and 25 charged since Saturday as the violence took a more sporadic feel but the number of officers on the ground increased.

But despite concern about the riots and criticism about how the police managed the situation, he dismisses comparisons to the 1985 rioting, which spread to other cities such as Bristol, Liverpool, and Birmingham.

“It was a totally different situation back then with deep resentments in parts of the ethnic minorities towards the police,” he adds. “Since then there has been greater dialogue between communities and the police and greater spending in those areas in housing and facilities.”

‘We need to rebuild this community’

While shopkeepers and householders calculate the damage to goods and property over the past 48 hours, the Independent Police Complaints Commission continues to investigate the original shooting of Duggan, a father of four, amid conflicting reports about whether he shot first.

A bullet lodged in a policeman’s radio, which was originally pointed to as evidence that officers were shot at first, has since been reported to be a police-issue bullet.

The dead man’s brother, Shaun Hall, who did not condone the rioting, said the original claims were “utter rubbish.”

He said: “My brother’s not that sort of person. He’s not stupid to shoot at the police, that’s ridiculous.

“I know people are frustrated, they’re angry out there at the moment, but I would say please try and hold it down. Please don’t make this about my brother’s life, he was a good man.”

That was echoed by local churchmen including the Reverend Nims Obunge, pastor at the Freedom’s Ark Church in Tottenham. He said walking around the town, which has lost its post office, job center, and some local businesses to fire damage and looting, breaks his heart and wants young people to know “they are ruining our communities.

“We need to rebuild this community,” he said. “I am calling for calm and peace so we can start rebuilding the families, communities and businesses that have been destroyed.