International aid desperately needed by starving Somalis is ready to be shipped, but leaders of an Islamist insurgency blocking its delivery show few signs of lifting their ban, aid workers and diplomats said.

The deadlock continued even as Washington on Tuesday night softened its line on aid for Islamist-held territory in Somalia. Agencies who take food to these areas no longer risk prosecution if any US-funded supplies fall into the militants’ hands, as was previously demanded by strict anti-terror laws at the Treasury’s Office of Foreign Assets Control.

Planeloads of food have already been sent to Somalia’s capital, Mogadishu, where sections controlled by the globally recognized government are seeing handouts to the most affected people. But great swathes of the rest of southern Somalia remain off limits to the main agencies, including the UN’s World Food Programme. 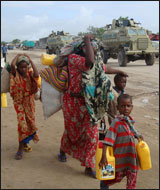 REUTERS/Feisal Omar
Al Shabab, Somalia’s Al Qaeda-inspired Islamist group, has repeatedly denied that there is a famine in their territory.

The problem is that Al Shabab, Somalia’s Al Qaeda-inspired Islamist group, has repeatedly denied that there is a famine in their territory, and refuses help from what they have termed “Christian organizations” with “hidden agendas.”

Al Shabab’s spokesman was not immediately available for comment. But diplomats and aid workers in Nairobi privately say that its leadership, gathered around a global jihadist agenda, was still “strictly against” aid from groups it has already banned.

At the same time, the sources said, there was a “very active and contested debate” going on within moderates in the organization as to whether the blanket opposition to aid should be removed.

Already UNICEF, the UN’s children’s agency, has landed an aid airplane at a Shabab-controlled airfield in the southern Somali city Baidoa – the first time it had approval to do so in two years. Its officials on the ground had made quiet approaches to local Shabab commanders to clear the flight.

Those commanders lie on the Islamists’ moderate wing, made up of “pragmatists” with a more local agenda aimed simply at ousting the government in Mogadishu, rather than carrying out calls for global jihad. Other agencies still trying to take food and supplies into Somalia were said to be testing approaches to other “pragmatists” within Al Shabab, an analyst said on Wednesday.

“I think the momentum is now with the people [in Al Shabab] who are saying let the aid agencies come in because of the gravity of the situation,” says Rashid Abdi, Horn of Africa analyst with the International Crisis Group. “The clan elders are also putting on a lot of pressure, saying we cannot let our people die, if you continue on this crazy path we will rise up against you.”

Approving deliveries is now very clearly a life or death decision, with senior aid officials warning that famine is “likely” to expand beyond the two Somali regions where it has already been declared.

“Unless we see a massive increase in the response, the famine will spread to five or six more regions,” Valerie Amos, the UN’s humanitarian affairs and emergency relief coordinator, warned on Tuesday. “We, of course, stand ready to increase our response on a massive scale. We have the capacity. But we also face armed groups who say they do not want us there. We are doing all we can, through negotiations, to change that situation.”