Putting the needs of millions of starving Somalis above terrorism concerns, the United States moved Tuesday to reassure international aid organizations that they will not face prosecution under US law if humanitarian assistance falls into the hands of US-listed terrorist groups. 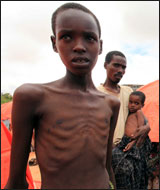 REUTERS/Feisal Omar
In all, the UN estimates that more than 12 million people in the Horn of Africa need food assistance.

The threat of mass starvation is so great, particularly in parts of central and southern Somalia controlled by the Al Qaeda-affiliated organization Al Shabab, that saving lives must come before following the letter of anti-terrorist regulations, said officials from the State Department, the US Agency for International Development (USAID), and the Treasury Department.

Humanitarian aid to southern Somalia largely dried up after Al Shabab took control of the region, and aid groups found themselves threatened by extremists on the ground and prosecution in the US, under Treasury’s Office of Foreign Assets Control (OFAC).

“We are working to reassure humanitarian assistance organizations that making a good-faith effort to help people in need will not result in prosecution,” said a senior administration official who spoke on a conference call with reporters on condition of anonymity. “I think there is some risk of diversion” of aid and funds to terrorist elements, the official added, “but the dimensions of this crisis are such that we have to put assistance first.”

The US will issue new guidelines over the coming weeks for organizations working in famine-stricken areas controlled by terrorist organizations, the officials said, but the federal government wants to assure groups in the meantime that they needn’t fear legal repercussions for administering aid.

The United Nations said Tuesday that it now expects famine conditions to spread over the coming month throughout all of southern Somalia, the hardest-hit region of the country, where nearly 3 million people are already at risk of starvation.

In all, the UN estimates that more than 12 million people in the Horn of Africa need food assistance, with Somalia the ground zero of the region’s drought-and-upheaval-induced crisis. So many Somali children face imminent starvation – more than 1 million by some estimates – that some officials are calling this “the children’s famine.”

Yet international humanitarian assistance organizations by and large pulled out of southern Somalia in January 2010, after Al Shabab took control of the region. The organizations faced heightened security risks as they came increasingly in contact with the extremist group’s anti-Western followers. Moreover, if they paid tolls and “taxes” for passage into Al Shabab-controlled territory, they faced prosecution under OFAC sanctions.

US assistance to Somalia dropped by over 80 percent after part of the country was taken over by Al Shabab, an Islamist group the US had included on its list of foreign terrorist organizations in February 2008.

US officials say they hope their reassurances to aid organizations will encourage them to return to work in southern Somalia. “We don’t expect any ‘grand bargain’ [with Al Shebab] to allow access to all of southern Somalia,” said one senior official. “But we do believe [aid groups] will be able to move into selected areas” of the starving south.

Some humanitarian assistance groups responded positively to the US action, but also expressed that they want more than verbal assurances.

“We welcome this announcement if it means more aid groups can respond to what is really a tremendous need in southern and central Somalia,” says Semhar Araia, Horn of Africa specialist for Oxfam, the international development organization.

“But we don’t yet know exactly what kinds of reassurances this means, so I think we’re going to see groups waiting for more information,” she added.

A similarly cautious tone was issued by Refugees International, a group that works with the large numbers of Somalis who have left their homes for refugee camps in Kenya and Ethiopia.

“We welcome any step the US is taking to make sure aid can get into the country,” said Megan Fowler, spokeswoman for the organization. “We look forward to seeing the concrete changes which we hope will replace some of the vagueness that has been of such concern to aid agencies.”

Security will remain a very big problem for aid workers in Somalia, Ms. Fowler notes, but she called it “very positive” that US officials are “showing signs that they understand the importance of addressing the problem” of delivering aid in Al Shabab-held territory.

Oxfam is not directly concerned with the US regulations, Ms. Araia says, because it does not accept US government funding and works through on-the-ground “partners” in Somalia. But she says that for groups who do work with US humanitarian assistance funding, the OFAC regulations have been a major concern.

“This famine is going to get worse before it gets better, and it is going to spread as starving people move around to try to find food and water,” she says. “In these conditions it is important that the aid groups that have the experience to go in and assess the needs in this kind of situation have the freedom to do so.”

US to aid groups: Feed the starving, even if Al Qaeda gets collateral benefits