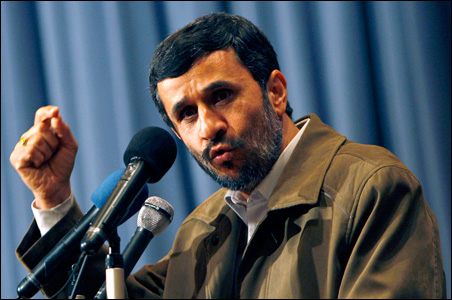 REUTERS/Raheb Homavandi
Mr. Ahmadinejad used an interview Tuesday with NBC to announce that the two Americans would be released shortly as a “humanitarian gesture.”

Now that Iran says it will soon free two American hikers jailed since 2009 for spying and illegally entering Iran, the major unanswered question is: Why now?

With Iranian President Mahmoud Ahmadinejad about to undertake his annual charm offensive to the United Nations General Assembly session in New York next week, some Iran observers believe the country’s leadership was keen to offer an international goodwill gesture.

Or is the hikers’ release somehow tied with the continuing international controversy over Iran’s nuclear program?

The country will face fresh suspicions about a possible military dimension of its nuclear development when it attends next week’s annual conference of the UN’s nuclear watchdog, the International Atomic Energy Agency (IAEA). For some, Iran wants to convey a cooperative and magnanimous air before confronting renewed international criticism at the nuclear meeting.

“The UN General Assembly meeting is next week, Ahmadinejad will be there, there will be a lot of press around him as in the past, and he will want to focus on this ‘humanitarian gesture’ as he himself called it, rather than on Iran’s own human rights record,” says Trita Parsi, president of the National Iranian American Council in Washington.

Mr. Ahmadinejad used an interview Tuesday with the US television network NBC to announce that the two Americans would be released shortly as a “humanitarian gesture.”

Shane Bauer and Josh Fattal were sentenced to eight years in prison by an Iranian court last month on a conviction for espionage and illegally entering Iran. The two Americans insisted they had mistakenly wandered across the border from Iraqi Kurdistan when they were arrested in 2009.

The two were arrested by Iranian security forces along with another American, Sarah Shourd. Ms. Shourd, who became engaged to Mr. Bauer while imprisoned, was released last September on the grounds she was in poor health.

The lawyer for the two American men said Tuesday that they would be released on $500,000 bail – the same amount of bail paid in Shourd’s release.

Shourd’s bail was reportedly paid by the sultan of Oman. At the time, the United States confirmed Oman’s key role in Shourd’s release but would not confirm who paid the bail – only saying it was neither the US government nor the hikers’ families.

On Tuesday, Secretary of State Hillary Rodham Clinton limited her reaction to expressing optimism that the two other Americans would indeed be released soon. “We are encouraged by what the Iranian government has said,” Secretary Clinton said. “We obviously hope that we will see a positive outcome from what appears to be a decision by the government.”

Still, speculation bubbled up all day Tuesday over the “why now” of the apparently imminent release.

Analysts who have focused on the international debate over Iran’s nuclear program say a number of recent developments could help explain why Iran might want to show its softer side at this time.

On Monday, the IAEA chief, Yukiya Amano, issued a statement saying he is “increasingly concerned” that Iran’s nuclear activities could include a military dimension. Also this week, Iran’s chief nuclear negotiator, Saeed Jalili, suggested that Iran is ready to return to international talks on its nuclear program.

The country may be anticipating a negative report on its nuclear program at next week’s IAEA meeting, some say, and may be seeking to soften the blow with a preemptive move that could offset that negative press.

But others doubt any connection between the Americans’ anticipated release and Iran’s nuclear dealings.

“To me it sounds a bit too far-fetched. I don’t think [the Iranians] would make the calculation that this case could affect that issue, because realistically I don’t think it could,” says Mr. Parsi, who is about to publish a new book, “A Single Role of the Dice – Obama’s Diplomacy With Iran.”

Parsi says the world should be cautious about Ahmadinejad’s announcement “until [the two Americans] are out of Iranian airspace.” He also suggests that if Bauer and Mr. Fattal are released, the journalists at the UN next week should use the development to question Ahmadinejad about conditions inside Iran.

“It would be even more of a positive step if [Iranian officials] don’t do just this one goodwill move,” he says, “but release all the political prisoners inside Iran.”

Ahmadinejad says US hikers in Iran will be released soon. Why now?