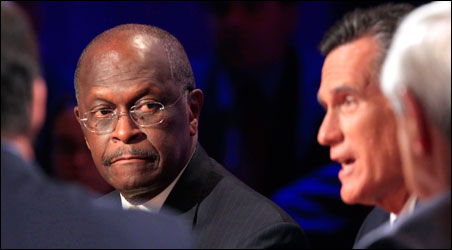 Herman Cain’s campaign is trumpeting the fact that they’ve raised $9 million since Oct. 1 as proof that supporters are sticking with him despite the sexual harassment allegations. According to the campaign’s press release: “Twenty-five percent of these newly received contributions have come in the last ten days” (or in other words, in the time that’s elapsed since scandal first broke).

Putting aside the weird ongoing confluence of Herman Cain and the No. 9 (which DCDecoder has commented on before), we would also point out that if a quarter of the money came in the last ten days – which represents a quarter of the 40 days that have elapsed since Oct 1. In other words, this doesn’t actually show a spike in contributions.

But it does indicate that donations haven’t fallen off, either. (Of course, there’s no way to independently verify any of these numbers until the campaigns submit their FEC reports on January 15.)

Meanwhile, the latest polls show that Cain has also held up – but the sexual harassment allegations are hurting him among some key groups: women, conservatives, and tea party members, according to a CBS poll released Friday. Cain leads with 18 percent of those surveyed. Mitt Romney and Newt Gingrich are tied for second at 15 percent.

Who’s picking up that support among women and conservatives? Newt Gingrich.