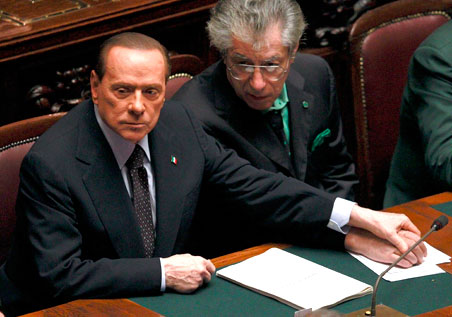 An era appears to be coming to a close for Italy, as Prime Minister Silvio Berlusconi officially announced his intention to resign. His move comes on the heels of the exit of Greece’s prime minister, George Papandreou.

“He cannot take his word back,” says David Bidussa, a historian at the progressive Istituto Feltrinelli. “It’s over.”

Mr. Berlusconi is infamous for having survived countless crises over the course of his political career. But in the end, it wasn’t his constant legal troubles – the prime minister is battling charges ranging from corruption to underage prostitution – nor was it the international gaffes he is famous for that brought the flamboyant prime minister to announce his willingness to resign. Rather, it was the economy.

Italy is facing one of the most severe economic crises to hit Europe, as rating agencies and European authorities worry that its huge public debt may force the nation to declare bankruptcy, dragging the whole eurozone down. Mr. Berlusconi, who has ruled Italy on and off since 1994, is widely blamed for the country’s poor finances.

For months the political opposition and high-ranking government officers – including some in Berlusconi’s own Freedom Party – have called for the prime minister to resign. He refused to quit until Tuesday evening, when he suffered a major defeat in Parliament over a series of economic reforms aimed to comply to requests from the European Central Bank.

Berlusconi sent a letter to President Giorgio Napolitano stating his intent to leave his post, but only after the Parliament approves the economic reform, which could happen later this week or the next.

After Parliament approves the economic reform, President Napolitano can either call early elections or ask the Parliament to form a new cabinet. “Immediate elections seem improbable as they would take too long,” says Mr. Bidussa, the historian. “The country needs quick reform. Something needs to be done immediately.”

If the Parliament directly nominates a new cabinet, the two most likely options seem to be the formation of either a nonpartisan government headed by a technocrat – perhaps Mario Monti, an internationally respected economist – or a grand coalition headed by a key figure in Berlusconi’s Freedom Party, such as his head of staff, Gianni Letta, or the party’s secretary, Angelino Alfano.

“The problem with the politicians from the Freedom Party is that they were directly nominated by Berlusconi in a top-down approach, so they will have a hard time building their own credibility without him,” argues Bidussa.

Berlusconi’s legacy as a strong ruler

A media tycoon, Berlusconi entered politics in the early 90s, filling the vacuum left by a series of huge corruption scandals that wiped out the two major political forces of the time, the Christian Democrats and the Socialists. In 1994 he founded his own party, Forza Italia (or Go Italy), with a signature mix of pro-market and populist rhetoric.

During his three terms as prime minister he moved Italy’s foreign policy, which had traditionally been moderately pro-Arab, closer to the US by joining the wars in Afghanistan, Iraq, and Libya. In 2009 he unified the conservative political spectrum into one single force, the Freedom Party, and is thus credited for having introduced bipolarism into Italy’s fragmented politics.

He is also credited for having introduced to Italy the American-inspired concept of leadership, having asserted himself as a strong leader de facto elected by the people, despite the fact that according to the Italian systems voters get to choose a party, not a head of government.

“Before him nobody even used the world prime minister in Italy,” says Bidussa. “Technically, the post is still ‘head of the cabinet’ as to stress it’s a primus inter pares [the first among equals] position. Now we’ll see who will be Italy’s next ruler. A head of cabinet or a prime minister?”