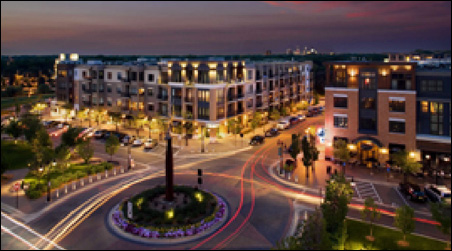 No recent Twin Cities real-estate development is more highly regarded than Excelsior & Grand, the dramatic remake of an aging commercial strip in St. Louis Park. Widely admired, visited and coveted by other communities, the $180 million mixed-use project begun in 2000 is held up as a model for how suburbs should reinvent themselves in a new century bedeviled by higher energy costs and greater environmental concerns.

Yet duplicating Excelsior & Grand today would be difficult if not impossible because of barriers erected by the Minnesota Legislature. That’s what the project’s developer told a gathering of public and private urban-design leaders this week at an Urban Land Institute seminar in Minneapolis. Bob Cunningham, a principal with Plymouth-based TOLD Development Co., said that new restrictions on eminent domain and tax-increment financing (TIF) are now major disincentives to the kind of high-quality urban infill projects required to meet both the emerging market and global challenges.

“It would be hard to do now because they’ve taken the tools away,” Cunningham said, adding that even when the housing market rebounds, a project like Excelsior & Grand would be unlikely in the Twin Cities.

Lawmakers steadily narrowed the availability of TIF in recent years. And in 2006 they outlawed the use of eminent domain (condemnation) for private purposes. Had the law been in place for Excelsior & Grand, one holdout property owner could have stopped the entire project, he said. (St. Louis Park did not condemn property for the project, but the law’s existence may have compelled some owners to settle with the city.)

Hennepin County Commissioner Gail Dorfman, who was mayor of St. Louis Park when the project was approved in the mid-1990s, said she’s a bit more optimistic than Cunningham on future projects. But she emphasized that Excelsior & Grand did benefit from a kind of harmonic convergence during those years:

• St. Louis Park, like other suburbs, wanted to have a downtown in order to establish an identity separate from Minneapolis.

• Along with other first-ring suburbs, it wanted desperately to stop “Murderapolis” gang violence from invading its turf. Upgrading its housing and retail environment was a good way to accomplish that.

• The aforementioned restrictions on condemnation and tax increment financing (TIF) had not yet been enacted.

• It wanted to make up for a poor job in redeveloping an old Honeywell factory site near Interstate Highway 394 and state Highway 100 into big-box retail.

• And it benefited from Livable Community grants and other planning support from the Metropolitan Council — which, at the time, wanted to demonstrate a prototype for “smart growth” in the Twin Cities.

A vision without resources
These recollections of Excelsior & Grand’s birth seemed almost nostalgic, as if Minnesota had a better handle then on how to do 21st century redevelopment than it does now. Without money, even the best plans don’t mean much, Dorfman suggested, offering this memorable sentence: “A vision without resources is a hallucination.”

Ted Mondale, who chaired the Metropolitan Council from 1999 to 2003, urged the gathering to hold onto the design principles learned at Excelsior & Grand. The housing market may be “in the toilet,” he said, “but those who dwell on that won’t win the future.” He reminded the group that the region now has a dedicated fund to build light-rail lines and other transit features that could act as catalysts for smart redevelopment similar to Excelsior & Grand near transit stations. “Don’t let them take the tools away from you,” he cautioned.

Excelsior & Grand isn’t a perfect model, of course. City Manager Tom Harmony said the town should have dealt from the beginning with a developer, like TOLD, that specialized in commercial rather than residential development because commercial — especially retail — is so much harder to do. The project’s 644 condos and rental apartments are pushing full occupancy, while retail has been good but less reliable.

Parking has been a main complaint. Suburbanites accustomed to parking within eyesight of a store’s front door are confused by ramps “hidden” within buildings that put cars closer but out of direct vision. Parking signs need to be even larger, Cunningham said, and a small surface lot next to a grocery store might have been a bit larger. No one anticipated, he said (noting out-of-state cars), that Trader Joe’s would become a tourist attraction.

Much of the knowledge gained at Excelsior & Grand is being used on a larger project — The West End, a 43-acre lifestyle center designed to bring office jobs and high-end retail to the intersection of I-394 and Highway 100. Construction is under way.