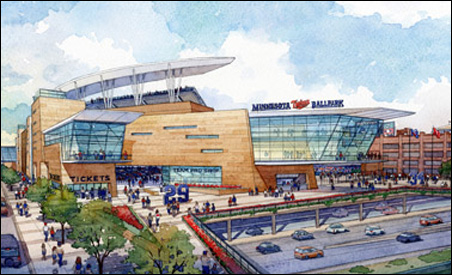 HOK Sport
Architectural rendering of finished Twins stadium due to open in 2010.

What a difference a year makes.

Last May the Minnesota Twins and their partners invited the news media onto a barren asphalt parking lot on the west end of downtown Minneapolis and asked everyone to imagine a new ballpark.

A year later, on a glorious Thursday afternoon, as the team was slogging through an extra-inning game inside the dingy Metrodome 13 blocks away, we put on hard hats and goggles and were led onto the construction site. We stood in the midst of the rising steel and concrete that forms the first-base concourse, 29 feet above field level. From there our view was sunny and panoramic, and we could more easily imagine the future. (KSTP-TV has a video report of Thursday’s tour here.)

The architectural drawings are nice. But until you’re on the site you can’t fully grasp the impact that the ballpark will have on its surroundings. In terms of both design and construction, this may be the most complex structure ever built in Minnesota.

A modern ballpark consumes about 14 acres of activity. Here, those activities are being stuffed onto a very tight 8-acre site. The result is similar to what happens when you bake a muffin. The batter goes into the cup, but when baking is finished the muffin top has exceeded its boundaries. The same has happened here. The ballpark’s functions spill into the surrounding cityscape.

Building from the inside out
That’s what makes this urban-style ballpark the most urban of its generation. There is no pause, no spatial gap between it and its surroundings. That complication means that, unlike most structures, this one must be built “from the inside out,” said Dan Mehls of Mortenson Construction, the general contractor. He noted that most of the heavy cranes and most of the staging area now rest on what will eventually be the field.

It’s not only that there’s no room on the edge to do construction work, he said, the edge itself is being constructed.

The sunken field is surrounded by a series of new pedestrian bridges, two active streets and two new rail stations (one for Northstar commuter trains, the other for light rail trains). There are three huge parking garages, a bus station and skyway connections just beyond the right-field wall. There’s a regional bike trail being built alongside an active freight rail line, all running beneath a pedestrian bridge on the west side of the project. And, to the east, there’s a large plaza being built above an active Interstate freeway. That plaza will become the ballpark’s main entrance, and its primary pedestrian connection to the heart of downtown.

All of that explains the site’s enormous complexity — but also its potential vitality. Two years ago, while touring new ballparks in San Diego and San Francisco, I asked Bruce Miller of HOK Sport, this project’s chief on-site architect, if he’d rather design a ballpark on a spacious green field or on a tight site in the midst of incredible urban complexity. He didn’t hesitate to select the latter. In that sense, the Minneapolis project is the most exciting and most challenging that the company has yet tackled. “It’s the hardest one we’ve done; I don’t sleep much at night,” he said.

But his enthusiasm is evident. “What excites me the most is that this ballpark is set up to embrace the future,” he said. Not only is it his intention to make it green (LEDE certified), it also fits the lifestyle required in the 21st century – accessible by transit, walking and biking, and surrounded, Miller expects, by condo buildings and pedestrian-friendly streets. Designing a major attraction that is not solely dominated by the automobile in an age of rising energy costs is especially satisfying, he said.

Miller predicted that fans will delight in the staged and seamless main entrance into the ballpark. A pedestrian ramp at the Target Center will open onto a broad plaza that, he said, will form a prime civic space for downtown. The plaza, in turn, will provide a panoramic opening into the ballpark from a perch just over the right-field wall. The broad expanse of green grass and the rising five-decked seating bowl will dominate the view.

Halo of lights instead of light towers
Miller showed us a mock-up of the various shades and textures of limestone that will cover most of the structure’s exterior and some of its interior. It’s a warm, sandy color that looks beautiful in sunlight, shade and artificial light. Other prominent features include glass cubes for some of the clubs, restaurants and team offices; generous and open concourses that are more than twice as spacious as those in the Metrodome, and a halo of lights embedded into the sunshade that covers most of the upper deck. This is a technology unique to the Twins project. The effect is to eliminate all but one of the light towers that normally surround a stadium. No light towers will obscure the skyline view beyond the center- and right-field walls.

As for the complexity of the seating bowl, Miller explained that most large architectural projects are made up of sections that repeat themselves. An apartment building, for example, is designed to stack similar apartments on top of one another for many stories. A football stadium may require only four different types of seating sections that are repeated around the gridiron. He guessed that most baseball parks require 40 separate, unique sections. This one has at least 60, he said.

A final step in construction will be the grass field. A 4- to 6-foot layer of new soil will form a “mattress” beneath a layer of sod now being grown offsite. Heating pipes will run beneath the sod, and a series of drains will collect water in a large underground cistern to be built beneath the outfield.

The project, once it cleared a series of legal disputes, has been “very smooth going,” said Minnesota Ballpark Authority Chairman Steve Cramer. Despite lousy winter weather, construction and design are on schedule. About 15,000 cubic yards of concrete have already been poured. That’s almost 30 percent of the total. The 40,000-seat park is scheduled to be ready for Opening Day in April 2010.

From parking lot to ballpark: Stadium easier to imagine