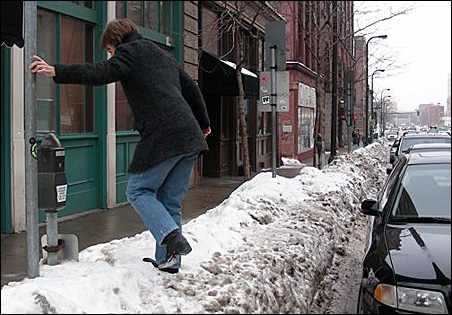 The first significant snowfall of the season has brought not only the usual slipping and sliding but the beginnings of snow windrows — the great mounds of snow, ice, dirt, motor oil, discarded paper cups, candy wrappers, mittens, dog urine and other assorted frozen detritus that, by winter’s end, grow into huge dirty-gray mountains alongside most downtown streets, giving Minneapolis its infamous Klondike appearance.

But maybe, just maybe, this is the last winter for snow windrows.

The City Council will vote Friday on turning over management of downtown sidewalks (and curbs) to a privately run business improvement district. If passed, one task high on the district’s list will be the consistent removal of snow along curbs — as happens in most civilized cities. (Minneapolis city government uses the euphemism “snow storage” to describe its snow-piling policy.)

If the windrows disappear, Minneapolitans will have adjustments to make. No climbing a slippery, 3-foot embankment to feed your parking meter. No leaping from the top of the windrow directly into your waiting bus. No wondering how somebody’s sock ended up embedded in the slushy grime piled along your sidewalk.

Some owners clear, others don’t bother
Time was when city crews did remove fresh snow along the curbs of major streets and auger it into the Mississippi River. That ended in the 1970s as costs mounted and curbside snow removal was left to the discretion of each property owner. Some property owners continued to clear the curbs; most preferred to wait until spring.

But waiting causes big problems. The old practice of dumping fresh snow into the river was environmentally friendly compared to allowing the toxic mounds to build up, then melt into the storm sewers and flow into the river. All in all, the windrows are a menace to public safety and, aesthetically speaking, they add to the evidence that ours is an embarrassingly primitive city.

Indeed, helping downtown compete with the manicured, impeccably maintained office parks and lifestyle centers of suburbia is a main impetus for the new improvement district. Its aim is to make downtown’s sidewalks cleaner, greener and safer — and to end public confusion over who’s responsible for maintaining walkways and curbsides.

Proposal is expected to pass
The proposal sailed through the Ways and Means committee unanimously on Tuesday and is expected to pass without much objection. “If the business community wants to raise its own taxes to upgrade these services, why should we stop them?” is the question Council Member Lisa Goodman keeps asking.

A downtown-wide special service district has been talked about since the 1980s. But legal tangles and opposition from city unions and business owners prevented any change until now.

Beginning last April, the Downtown Council employed Sarah Harris, president of the pedestrian organization Walking Minneapolis, to rally support for a district. Owners of 65 percent of downtown properties finally agreed to allow the city to assess an additional $6.5 million a year to pay for extra sidewalk services. All private property owners in the 120-block district will be assessed (see this map). (PDF)

The city’s Public Works department has been a prime partner in the effort. A board representing a variety of property owners and the operators of major downtown assets would run the new district, although city government would retain broad jurisdiction over public spaces. The new district could begin operating by June. Harris is expected to manage the district, at least at the outset.

“We need to do this to remain competitive in attracting new jobs and new people,” Harris said. People have come to expect higher standards of beauty and cleanliness on urban sidewalks, and sidewalks should become places for community engagement, she said.  Harris sees outdoor markets and festivals as part of downtown’s future and expects to hire sidewalk ambassadors to provide both tourist information and an extra layer of security. These are all common features of business improvement districts that operate public spaces in most major downtowns.

Harris is not deterred. “Skyways are not the problem, it’s just that the sidewalks ought to be equal,” she said. “They should be a place where people want to be.”

A Downtown Improvement District won’t perform instant miracles for the city’s dismal pedestrian atmosphere. But, as other cities have found, revival is possible when standards are raised. In winter, ridding the curbsides of treacherous icy mounds is a good place to start.