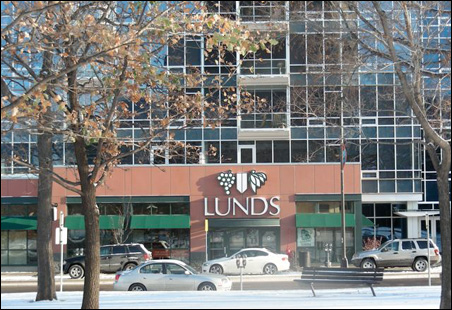 MinnPost photo by Steve Berg
Downtown St. Paul’s proposed Lunds supermarket would be patterned after this one, opened in 2006 on the edge of downtown Minneapolis.

Last week’s announcement that Lund Food Holdings, Inc. intends to locate a major supermarket as part of the Penfield development in downtown St. Paul didn’t get the attention of, say, landing an NHL franchise or a new corporate headquarters. But from the standpoint of urban revival in the Twin Cities it is a very big deal.

“The impact goes way beyond the 30,000 square-foot size of the project,” said Patrick Seeb, president of the St. Paul Riverfront Corp. “Psychologically, it lifts the downtown beyond the point of just being a place for urban pioneers.”

I know firsthand that Seeb is right. There’s something special about a supermarket — especially a high-end store like Lunds — coming into a developing urban community. For residents carving out new lives in and among old factories and warehouses, it’s a signal their neighborhood has finally arrived. And for potential newcomers, it’s an invitation of sorts to move back into the city.

The focal point of everyday life
In 2006, three blocks away from our loft building, Lunds opened a new store at University and Central Avenues S.E., the first of three upscale supermarkets slated for downtown Minneapolis. Immediately the store became the focal point of everyday life. Lunds is the place where you run into friends in the frozen foods aisle, chat with the cheese lady and trade jokes with the butchers. Aside from the astounding convenience of buying groceries a short walk away, having a human-scale store so close at hand makes you feel grounded and comfortably at home. The massive anonymity of suburbia — and the need for all that driving — is replaced by the realization that the best small towns are sometimes in big cities.

“Food, home and comfort go together,” said Carolyn Ginther, who said she’s surprised how much Lunds changed the feel of her neighborhood. From her office window (she managers the Village Lofts complex on First Avenue N.E.) she sees dozens of people a day — even now, bundled against the cold — toting their green cloth Lunds bags down the street, or pulling two-wheeler grocery carts.

“People around here can afford to drive to the store, but a lot of them prefer to walk, even in this weather. It’s kind of an environmental statement that you can walk to the neighborhood stores,” she said.

Commitment should help other pieces of project
Lunds’ commitment to downtown St. Paul shows confidence in the district’s growth potential when better economic times return. It also should help line up financing for other pieces in the long-delayed Penfield project: a 170-room Hilton Place Select Service hotel and a 208-unit market-rate apartment tower designed to rise above the supermarket. The full-block $88 million project would be built between Robert and Minnesota and 10th and 11th streets. Construction could begin next year if financing from the U.S. Department of Housing and Urban Development materializes.

“HUD is still open for business,” said Bob Lux of Alatus Partners, the project’s developer. “We’d have no chance to do this right now in the commercial market.”

Penfield was, perhaps, the highest-profile Twin Cities condo project to buckle under the current credit and real-estate crunch. Alatus had built the successful Grant Park and Carlyle luxury condominium towers in downtown Minneapolis, and Penfield, a 33-story luxury condo tower with 313 units, had been expected to follow.

Now, with industry in hibernation, a smaller project still represents a coup for downtown St. Paul, which hasn’t scored a major residential tower in nearly two decades, and where there’s almost no luxury housing. Lux sees an opportunity, however, with a light-rail line on the horizon and a supermarket now committed.

Lunds pleased with first urban-style store
Similar projects have opened in Baltimore and Washington, D.C., in recent years, as well as in Minneapolis, where, by all accounts, Lunds is pleased with its first urban-style store. It emphasizes ready-to-eat deli items, lots of organic produce and walk-in customers who shop more than once a week. (There’s also an attached parking garage and a condo tower, the Cobalt, on the upper floors.)

“It’s very successful and popular,” said Lunds spokesman Aaron Sorenson. The company considers it a prototype for a second downtown Minneapolis store to be built at 10th and Hennepin, and for the St. Paul store.

With about 7,400 residents and 65,000 workers, downtown St. Paul has only a fraction of the residential and workforce numbers of downtown Minneapolis (30,000 residents, 160,000 workers). But its riverfront setting and its stock of historic buildings are unmatched. Something as simple as a grocery store could be an important catalyst. I’ve never thought that St. Paul should try to become a conventional downtown filled with office towers and chain stores. It should capitalize on its best features: historic buildings, two of the loveliest parks anywhere (Rice and Mears), cozy streets and a picturesque setting. St. Paul has terrific residential bones.

Lux agrees. “It’s a diamond in the rough. We think the long-range future of downtown St. Paul is incredibly bright.”