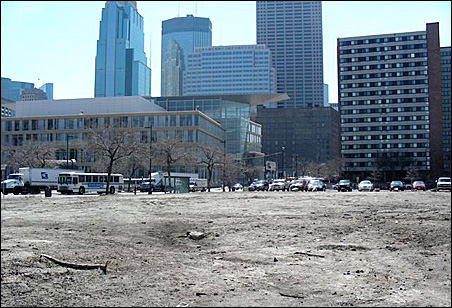 MinnPost photo by Steve Berg
Land reform would bring less of this to downtown Minneapolis.

“Land reform” usually refers to peasants striving for a greater share of farmland in a developing country. The United States needs a different kind of land reform. It needs reform that responds to big global challenges that suddenly loom, among them: climate change, volatile energy prices and the need for efficiency in a faltering economy.

At a workshop offered last week by the Urban Land Institute, John Shardlow, a Twin Cities planning executive, asked a profound and timely question: “What if redevelopment were easier?”

Shardlow’s complaint is that nearly all of our current laws, regulations and economic incentives tip the balance in favor of new construction on undeveloped land at the metropolitan edge, whereas the global challenges mentioned above suggest the need for quite the opposite: a recycling of land already developed.

Unless the rules are made more balanced, land development will proceed in the same old way when the economy revives. Those same old ways damage the environment, waste resources, hamper government efficiency, harm energy independence and ignore an emerging market segment that wants greater choices for compact living.

Issues of energy and transportation have generated plenty of attention. There’s much talk of capping and trading carbon emissions and of expected innovations from automakers. Calls for more trains, buses and other mass transit strategies ring louder and clearer. Congress will soon pass a huge stimulus plan that, in part, aims to repair roads and bridges. Lawmakers expect also to update the nation’s basic transportation funding this year.

But there’s scarcely a mention of transportation’s close cousin — land use. Travel makes little sense without a destination. If destinations can, over time, be rebuilt in closer proximity, well, you begin to make big headway against the global challenges. Carbon is reduced, oil consumption lessened and communities are made more efficient by using more of the infrastructure they already have.

“There’s no possible way to reduce greenhouse gas emissions significantly without reducing vehicle miles traveled and changing development patterns,” said Shardlow, a principal at the planning and engineer firm Bonestroo. He cited a U.S. Green Building Council study predicting that by 2050, 60 percent of all structures will have been built between now and then. It’s the location and design of those new structures that’s at stake, he said.

Ideas for redevelopment offered
So, what would give redevelopment a fairer shot? The 100 or so developers and planners attending the workshop offered two dozen ideas. Here are my top three:

1. Find some legal inroad against the disastrous Supreme Court decision of 2005 that severely limited the power of eminent domain for economic development. By removing the threat of condemnation, Kelo vs. City of New London has severely restricted the revival of older communities. A single hold-out property owner can stop a major project that would bring a wide benefit. Even a single long-term lease holder can stop the redevelopment of a struggling strip mall — one reason there are hundreds of such malls in the Twin Cities metro with little hope for revival. Some of the metro’s best redo projects (Excelsior Grand in St. Louis Park is a top example) could not happen in a post-elo world.

2. Revamp Minnesota’s obsolete tax increment finance (TIF) law. TIF allows a city to borrow against future tax receipts in order to build projects that, but for the TIF benefit, would not be built. Currently, TIF is allowed only to eliminate blight. But there are many other valid reasons for community redevelopment: economic obsolescence, declining value, curbing crime, reducing carbon footprint, cutting down on the need to drive, adding green features, etc.

“If we don’t redefine public purpose in our TIF law, then we’ll be stuck with the existing urban stock and all new buildings will have to be built on green space,” said Stephen Bubul, attorney at Kennedy and Graven.

3. Increase incentives for infill (see above) while reducing incentives for sprawl. Charging developers a fee for the cost of new infrastructure (sewers, roads, schools, etc.) would be a good start. Eliminating tax incentives for “sitting on” surface parking lot property in otherwise dense areas is another approach.

Advocates for redevelopment often come off as sounding morally superior and contemptuous of all green field projects. That’s a mistake. The real issue is finding a true and fair balance between rebuilding the old and adding the new. People should have fairer choices about lifestyles, choices that reflect their true costs to society. Tony Schertler, a financial adviser at Sprinsted, said the crux of the question is how to slow down leap-frog development as the default option. His suggestion: “Cut the legs off the frog.”