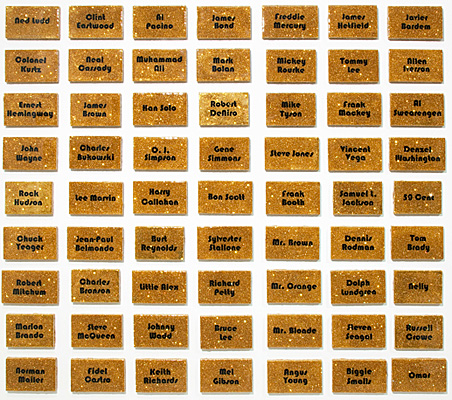 City life brings with it the advantage of wider social experience. More than in the country or the suburbs, you run into people you wouldn’t otherwise encounter. Some want spare change. Some want directions to this or that office building. Some want to talk about their art.

I ran into Andrea Stanislav last week as she was helping to take down her recent show at the Chambers Hotel‘s Burnet Art Gallery in downtown Minneapolis. One piece in particular couldn’t help but provoke conversation. Stanislav had laid out 63 sparkling gold-colored tiles, each imprinted with the name of a man.

All of the men were famous. Some were fictional characters. Some were real. Some were a little of both. John Wayne and Lee Marvin were there. So were Steve McQueen, Charles Bronson, Robert Mitchum, Russell Crowe, James Brown, James Hetfield, James Bond and Fidel Castro, all arranged so that the viewer couldn’t help but try to solve the puzzle. What did these men have in common? What were Chuck Yeager, Mike Tyson, 50 Cent, Gene Simmons and Norman Mailer all doing on the same board? What was the artist was trying to say about them, and about men in general?

Since Stanislav was standing right there, I decided to ask her.

Rather than answering straight up, she seemed more interested in drawing me out. What did I think the names meant?

The question of intent
After a few minutes, I told her that testosterone and violence seemed to be the theme, but I didn’t know if she was celebrating or lamenting. She had mounted these names on a glossy gold background as if to magnify their fame and sexual attraction, yet each man listed had a significant down side. Taken all together, a feminist might be seen as blaming these men — all men — for the sorry state of the world.

But I could tell by talking with Stanislav that that wasn’t it. She liked these guys. I noticed right off that some men were listed twice. Both Clint Eastwood and Harry Callahan (his “Dirty Harry” character) were there, as were both Marlon Brando and Colonel Kurtz, Brando’s lunatic butcher in “Apocalypse Now.” Brando’s co-rebels from his earlier film years, Montgomery Clift and James Dean, were not included, however. Were they too sensitive, I asked? Probably, Stanislav said. Al Pacino and Robert DiNiro were there, but Sean Penn and Sean Connery (except for his Bond persona) were missing. Too vulnerable, perhaps? Perhaps.

‘A trophy wall’
The big thing I was missing, she told me, was the duality of each character. “This is a trophy wall for me,” she said, admitting that these men (and the characters and attitudes they project) are sexual ideals for her, yet each man carries the scent of dystopia.

Intellectuals were not excluded, as long as they were brawlers. Ernest Hemingway made it, as did Norman Mailer and Neal Cassady. Even some cartoonish characters made Stanislav’s cut: the tattooed basketballers Dennis Rodman and Allen Iverson, for example, and the movie toughies Steven Seagal, Sylvester Stallone, Bruce Lee and Dolph Lundgren.

Gays on the list
Gays made the list, too, notably the British rocker Freddie Mercury and Omar, the Michael K. Williams gangster figure in the HBO series “The Wire.” “He has a strict moral code,” Stanislav explained. “He doesn’t kill people on Sundays.”

Then there was Rock Hudson, the original king of duality. “My grandmother loved Rock Hudson,” Stanislav told me. “My mother said that thank God she passed away before she found out.”

All together, the tiles memorialize a waning of the kind of masculinity that attracts women at a gut level, despite the destruction — and self-destruction — that that kind of intense masculinity carries with it, said Stanislav. “Men create and then they destroy.”

The artist, who is 40 years old, divides her time between Minneapolis, where she’s an art professor at the University of Minnesota, and New York, where the preening new type of metrosexual boy is more evident, she said. “We’re in a time where men are becoming more feminine and women more masculine,” she said. “Where are the new Brandos and DiNiros?”

On her website, Stanislav says the intent of her art “is to produce an aftershock of recognition, a corrosive effect on cherished misinformation.” Obviously, she wants to engage the viewer, in conversation if possible.

Stanislav was leaving town to set up a new show in Key West, Fla. We finished our talk by phone, talking a little about the importance of cities to art and agreeing that cities are the places where conversations like ours are most likely to occur — and that art and interaction (as much as nice storefronts and clean bus stops) are essential elements of good urban design.

Art, interaction: Both are essential to urban design