urban-habitats.org
The Sunrise Trailer Court, subject of a redesign competition, in Charlottesville, Va.

Bill Morrish has always been a restless thinker. Back in the days when your only recourse was to flee your urban neighborhood, Morrish wrote a book called “Planning to Stay.” It was an architectural guide to retrofitting city neighborhoods in ways that actually suited residents and stabilized communities.

Then when “new urbanism” and “smart growth” became orthodox concepts and cities got cool again, Morrish’s mind shifted to the suburbs and their problems with aging ramblers and empty strip malls.

Now, with the housing market in shambles and Americans getting poorer by the minute, Morrish’s mind has skipped ahead once again, this time to the trailer park as a model for new housing. Seriously.

An interlacing of long, narrow structures
His new book, “Growing Urban Habitats, Seeking a New Housing Development Model,” will be out in June. It begins with a proposal to refashion an aging trailer park in Charlottesville, Va., and ends with a design that interlaces long, narrow structures that are affordable, sustainable and well-suited to the valley just below Thomas Jefferson’s Monticello estate.

“The project is fairly dense, but it doesn’t just stack units up into the air,” Morrish told me on Monday, just before speaking to an overflow crowd of 200 housing advocates (including Metropolitan Council Chairman Peter Bell) gathered in downtown Minneapolis by Family Housing Fund and its partners.

Morrish, a native Californian, first made his mark in the 1990s as head of the Design Center for the American Urban Landscape at the University of Minnesota. New York Times architecture critic Herbert Muschamp went so far as to write that “William Morrish and Catherine Brown are the most valuable thinkers in American urbanism today.” That was after “Planning to Stay” appeared in 1994. But Brown, Morrish’s wife, died in 1998 and Morrish did not stay. In 2001, he accepted a prestigious post at the University of Virginia’s architecture school. 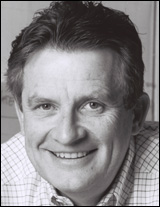 Four years later, as Morrish tells it, a local Habitat for Humanity organization realized it wasn’t making enough headway building one home at a time. The group’s eye fell on the old Sunrise Trailer Court not far from the university’s historic campus. The result was collaboration with Morrish and two colleagues — designer Katie Swenson and Susanne Schindler, the Boston architect who eventually won an international competition for transforming the trailer court into, well, something far more than a trailer court. The project, says Morrish, could forge a new prototype for affordable medium-density housing.

Advantages of light, air
Trailers have long interested Morrish. He likes the simplicity of long, narrow, free-standing structures. Light and breezes come in from either side. If ceilings are pushed to 10 feet or higher, small rooms can feel much larger. And since most walls are exterior walls, the possibilities of adjacent gardens and indoor/outdoor spaces are many.

He had no quarrel, really, with the new urbanist movement. But stacking homes above retail shops along transit corridors can’t happen everywhere. Besides, there’s a “formula” to new urban design that doesn’t appeal to Morrish’s eclectic tastes.

Morrish has never been interested in the form of a building in isolation. Rather, his talent lies in analyzing the complex web of relationships among buildings, humans and events. The 21st century has brought dramatic changes to that mix, especially in the housing market.

Homes nowadays must be smaller and cheaper. They must use energy more efficiently. Cars must be fewer and transit more available. Towns must be more compact, with stores and jobs closer. Housing types must be more varied to match changing demographics. Many homes, for example, must include independent spaces for aging parents or returning children. Immigrant homes must accommodate extended families. Many more people are single. Many more need live/work spaces. Landscaping is more important than ever. Water must be captured and recycled. Zoning and permitting processes must be streamlined. Creative financing is vital.

Housing units averaged 1,200 square feet
At the Sunrise Trailer Court in Charlottesville, where 11 mobile homes stood on a 2.3-acre site, the challenge was to triple the population by substituting 15 to 30 fixed housing units averaging 1,200 square feet. There could be no elevators and no structured parking. There would be a mix of incomes and a mix of rental and for-purchase units.

Schindler’s winning design arranges long, narrow units in offset layers of one to three stories. All homes have access to green spaces. All use natural light and cross ventilation. The project surrounds a series of community gardens. Parking is on the first level of the condo buildings or alongside the single units. Pre-cast materials are employed to save money and comply with green-building goals.

The project is now going through the maze of city approvals before construction can begin. Marion Dudley, a trailer park resident who plans to move into the development when it’s completed, says this on the project’s website: “This one said ‘home’ to me; it looks more like our own home than we have now.”

It’s a point Morrish emphasizes. “We need to listen more to people we’re building for,” he told me.

Elizabeth Ryan, vice president for regional housing initiatives at Family Housing Fund, praised Morrish for stimulating a “rethinking of our notions about design, finance and regulation, and a rethinking about how to work together.”