Old rivalries die hard. Despite high-minded rhetoric about metro unity and a veneer of mutual conviviality, Minneapolis and St. Paul are still basically at each other’s throats. The latest tussle is over which downtown should be the terminus for the Chicago-Twin Cities high-speed rail line.

There is no such line, of course. Not yet. But high-speed rail is no longer a distant dream. President Obama’s Recovery and Reinvestment Act includes competition for $8 billion in federal money to begin high-speed corridors in a half-dozen regions of the country. Included are several potential lines running outward from a Midwestern hub in Chicago. If the Twin Cities leg is selected, trains running northwest from Chicago would stop in Milwaukee, Madison and Winona, among other points, before arriving finally in, well, that depends on who’s talking; politicians in the east metro say St. Paul and politicians in the west metro say St. Paul followed by Minneapolis.

Sorting it out won’t be easy. A unified position seems critical if the line is to be selected within the next several months.

In 2005, U.S. Rep. Jim Oberstar, the influential chairman of the House Transportation and Infrastructure Committee, secured a $50 million earmark for renovating St. Paul’s historic Union Depot in Lowertown. The object was to outfit the station to handle future rail traffic, including high-speed trains to Chicago. That infusion of federal cash bolstered Ramsey County’s assumption that Union Depot would emerge as the singular rail hub for the Twin Cities.

Over in the west metro, meanwhile, Hennepin and Anoka County officials anticipated a major transportation convergence near Target Field, the new Twins ballpark in the North Loop. All of the metro’s light rail lines (Hiawatha, Central, Southwest and Bottineau) would meet there. Northstar commuter trains will begin operating from there later this year. A revived line to Duluth, now on the drawing board, would also use the new Target Field station. (PDF) Including the Chicago high-speed trains made sense for the sake of convenience and customer service. 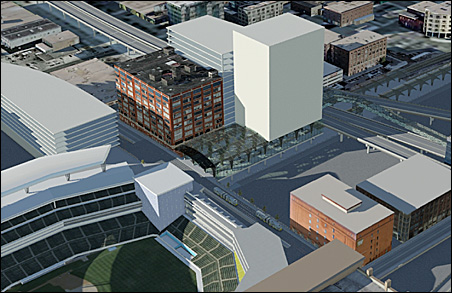 Minnesota’s share: $500 million
But U.S. Rep. Betty McCollum, D-Minn., and Ramsey County Commissioner Jim McDonough aren’t convinced that a Minneapolis stop is needed. Minnesota’s share of the $1.2 billion high-speed project will approach $500 million, all in federal money, McDonough said Thursday. No one knows the cost of a Minneapolis extension, or the potential for additional riders. No one knows the extra cost for Amtrak to operate two stations in the Twin Cities, he said. It’s a redundancy we can’t afford. Chicago and Los Angeles won’t have two central stations for high-speed trains. Neither should the Twin Cities.

“What value does it add?” McDonough asked.

McCollum, whose congressional district includes St. Paul, said that Minnesota must be in a position now to act clearly and decisively. This isn’t the time to change the Chicago-St. Paul corridor that has been studied since 1998, she said Thursday.

“This is a once-in-a-century opportunity,” she said. “To have two heavy rail stations 10 miles apart makes no sense.” The connection to Minneapolis is provided by the Central light rail line, expected to open in 2014, she said. A study on whether to add Minneapolis could be launched sometime in the future, she noted, but not now.

A bill in the Legislature contemplates such a study as part of small bonding allocation to be included in Minnesota’s high-speed application. But there may be a move afoot to strip Minneapolis from consideration, according to Hennepin County Commissioner Peter McLaughlin.

That would be a huge mistake, said McLaughlin, who believes that including Minneapolis is essential for the project’s success. The whole point of high-speed service is to connect the nation’s largest commercial centers, he said. The market dictates that Chicago riders will want to reach Minnesota’s primary commercial hub, and that’s downtown Minneapolis. He’s not against a stop in St. Paul. But it would be foolish not to deliver riders where they most want to go. “It’s not good customer service to deliver passengers to a point 10 miles from their destination,” he said. “Forcing people to transfer loses riders.”

McLaughlin disputes the notion that the Midwest Interstate Passenger Rail Commission has selected St. Paul as the only terminus. Union Depot has no direct connection to the airport, he noted. Nor will it connect directly to Duluth, St. Cloud, Willmar, Fargo-Moorhead or other potential high-speed points. A Chicago passenger bound for Medtronic would have to change trains twice, he noted.

“We’re trying to connect our region to the world market,” McLaughlin said. “We can’t sacrifice that because some people in the east metro have a ‘beggar thy neighbor’ attitude. I don’t understand why they want to cut us out. We’re in favor of stopping at Union Depot. We want that. We’re not a threat to them in any way.”

His comments came after a briefing on the Target Field station. The county is contemplating demolishing its Environmental Services Building adjacent to the ballpark to expand the size of the station.

A wider divide
The dispute is part of a wider divide on transportation in the Twin Cities region. The east metro wants projects evaluated on the basis of fairness and balance. The west metro sees the marketplace as the determining factor. With the epicenter of population and commercial activity shifting southwest and northwest in recent years, Union Depot, first built in 1917, seems to many of them a remote location.

“Trains stop at places where they get riders,” said Rep. Frank Hornstein, DFL-Minneapolis. “It’s not true that metro areas have only one station. Trains stop in Newark and Penn Station [New York]. They stop in Baltimore and Washington. They stop in San Francisco and Oakland.”

Hornstein’s impression is that metro legislators are unified in supporting Union Depot while studying an extension to Minneapolis. Adding a stop in Minneapolis would obviously strengthen the line, he said.

Sen. Scott Dibble, DFL-Minneapolis, agrees. “Maybe there’s some deep-down fear that St. Paul will be bypassed,” he said. “But that’s not going to happen.”

Both cited a letter sent last month to Minnesota’s congressional delegation and signed by key metro legislators agreeing that the route should be “Chicago to St. Paul’s Union Depot and possibly Minneapolis.” The letter said that studying “the option of continuing the route on to Minneapolis at this time” would be part of the state’s high-speed application. Neither on Thursday had heard of any attempt to scuttle the Minneapolis option.

Another fight over the high-speed route seems to have been decided. Because of the high cost of buying new right-of-way south of St. Paul, trains will use the existing Empire Builder route along the Mississippi River through Winona, thus skipping Rochester. In the best of all worlds, Rochester and Mayo Clinic would be a must; apparently the price tag is too steep.

It’s a reminder that this isn’t really a high-speed project in the world-class sense. The trains’ top speeds will be 110 miles per hour. That’s one-third faster than current operations, but only half as fast as trains in Europe and Japan. The current eight-hour rail trip to Chicago would be shortened to about five hours and 20 minutes. The whole idea is to offer an energy-efficient alternative to driving or flying for trips of 500 miles or less.

Competition is expected to be fierce for the $8 billion of stimulus and additional money in Obama’s budget and in the transportation reauthorization expected later this year. California may have the biggest claim after voters passed a $10 billion plan last fall to connect major cities via high-speed rail.

The scramble over rail is reminiscent of battles in the 19th Century over which settlements the railroads would choose. People know that economic development and prosperity clustered along the rail lines. When the Union Pacific decided in the 1860s to build the West’s first transcontinental line trough Wyoming, Denver business leaders were so alarmed that they financed their own spur to Cheyenne.

Similar battles ensued in the 1950s and ’60s over the routing and numbering of interstate highways. The odd naming of 35W and 35E was to avoid slighting St. Paul. Originally, the main route, I-35, was to have gone through Minneapolis with a smaller parallel route, I-235, or a similar three-number designation, through St. Paul. But that was considered politically unacceptable. The same compromise was offered to Dallas and Fort Worth.

In the March issue of Atlantic Monthly, economist Richard Florida offers a backdrop for the current scramble over high-speed rail. The economy’s crash, along with other major global forces, are causing a major re-ordering of the American geography, he says. Prosperity will be sorted and centered in just a few mega-regions, Chicago being one. It’s vital, then, for the Twin Cities to strengthen itself as a prime appendage. High-speed rail is one way to do that.