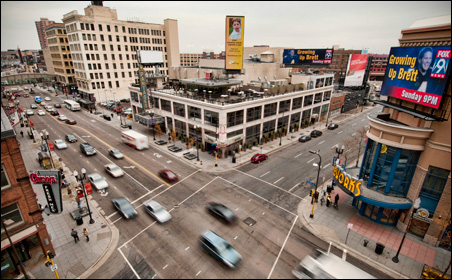 MinnPost photo by John Noltner
Hennepin Avenue is back to two-way auto traffic, making the city’s entertainment district feel more like a destination than just a pass-through.

Cityscape, a column about city life and urban design, resumes today after a six-month hiatus.

The old gal is getting a makeover. Downtown Minneapolis over the last several months has updated its vacuous 1960s look to become something that feels like a cozier, more authentic urban place.

• Two major streets — Hennepin and First avenues — have gone back to two-way auto traffic after three decades as a one-way pair. The change makes the city’s entertainment district feel more like a destination than just a pass-through.

• Two other streets — Marquette and Second avenues — are being recast as transit malls complete with actual trees, public art, heated shelters and digital “scoreboards” that announce real-time bus arrivals. The aim is to concentrate most bus traffic on just two streets, thus loosening the grip on other streets. Launch date is Dec. 14.

• A new business-led Downtown Improvement District has kept sidewalks far cleaner and plans next year to begin planting (and watering!) more greenery along the sidewalks. The district has also placed 50 green-clad “ambassadors” on the streets to direct visitors and provide a friendlier, more confident atmosphere for pedestrians.

It’s about time. When public spaces begin to slide it’s easy to conclude that a city is headed downhill. New attention to streets and sidewalks are meant to change that perception — and to match the city to a changing world.

Downtowns must change to succeed
The old model cast downtown primarily as an office district for workers to use for eight hours a day and then to quickly abandon. Wide one-way streets were designed to get them in and out as quickly as possible. With skyways overhead, sidewalks weren’t considered important.

But over the last 20 years a new model has taken hold in many U.S. cities. Successful downtowns are 24-hour districts. People not only work downtown but live there, too. Retail stores that trickled to the suburbs are slowly returning. Sidewalks have become livelier. Transit ridership has risen to its highest levels in decades. A growing number of people use bicycles to get around. Downtown streets are no longer just funnels for cars but parts of a community.

The changes in Minneapolis [PDF] are meant to match these national trends. The hope is that a cleaner, greener, cozier atmosphere will provide a more attractive setting for new offices, retail and housing when the economy revives. “We’re trying to consider the greater social and environmental good,” said Council Member Lisa Goodman, whose ward includes most of downtown. “And the greater good is not just for people in cars. We are converting to a new kind of city.”

If Goodman’s new kind of city is sometimes clogged with cars — especially in its entertainment district — the answer may not be returning to one-way streets but rather improving police traffic control, she said. “It’s not the job of every street downtown to funnel traffic as fast as possible. Some streets are also places to be. They’re not just conveyances.”

Heartburn on First Avenue
Of the three big changes the two-way conversions on Hennepin and First avenues have raised the most objection. Thirty-year driving habits are hard to relearn. New traffic patterns may have worsened auto congestion when the usual nightclub traffic mingles with special event crowds at Target Center. Some drivers are abusing the right lane restrictions on Hennepin (the lane is set aside for buses, bikes and right-turn autos only). And a new parking configuration and curb-hugging Euro-style bike lanes have caused confusion on First Avenue. Between Oct. 3 and Nov. 7, police officers issued 274 citations on that street alone. It didn’t help that the streets were changed before markings were painted on the pavement, but that has been fixed.

Complaints are inevitable any time change occurs, but normalcy has returned in recent weeks. Jenifer Loritz, project manager for the street job, said the city is studying a number of adjustments to help traffic flow, including a downtown-wide recalibrating of traffic lights next year. “It’s an extreme balancing act,” she said, referring to reality that downtown streets must satisfy merchants, parking, shoppers, commuters, bicyclists, buses and pedestrians, all within a 60-foot strip.

“This is our entertainment district,” she said. “We want it to be a destination, not just a route through downtown.”

A better bus experience
Workers are putting finishing touches on the extreme makeover applied to Marquette and Second avenues, where 16 months of dusty construction caused a business nightmare. Some merchants uttered words not heard since Vietnam: “They’re destroying it in order to save it.” But the emerging streetscape transforms two of the city’s bleakest streets into pleasant places — complete with wider sidewalks, trees and public art.

“It was a lot of short term pain for a lot of long-term gain,” said the city’s project manager Bill Fellows, who noted that the massive volume of work is being completed at a rate two to four times faster than normal.

The main point is to consolidate 80 percent of downtown’s express buses on just two streets while also speeding their flow through the 20-block core. The old configuration was a mess: scores of buses inching single file through downtown. “No bus was faster than the slowest bus,” said Bob Gibbons, communications director for Metro Transit.

The new double-lane arrangement allows buses to pass one another and to pick up riders on every other block. The system will triple transit capacity and speed on the streets. A 10-block southbound afternoon trip through the core that took a half hour will now take 10 minutes. Heated shelters with GPS-provided real time arrival information will remove a lot of anxiety during the p.m. rush.

The project, nicknamed Marq2, is a $40 million piece of the $133 million Urban Partnership Agreement with the federal government. It’s one of several incremental steps toward BRT, or Bus Rapid Transit, which gives express buses some of the attributes of trains: exclusive lanes, more comfortable stations and fewer stops. BRT in the Twin Cities won’t be accomplished all at once but rather in bits and pieces spread over several years. The federal agreement covers not only the remaking of Marquette and Second avenues but BRT and toll lanes (and several new bus stations) between downtown and Burnsville, Lakeville and Apple Valley, along both Hwy. 35W and Cedar Avenue.

Sixty-seven Metro Transit routes and the routes of other bus lines will begin using Marq2 on Dec. 14. Another 14 routes will be shifted off Nicollet Mall starting next March.

Cleaner, greener, safer
Perceptions matter. People take their cues from seemingly small things that begin to add up. A city that shrugs off loitering and aggressive panhandling, a city that fails to pick up trash or wash down sidewalks or care for trees and plants begins to send the signal that it doesn’t care. That’s the trap downtown Minneapolis was falling into. Because some its most visible public spaces were being neglected, people began to assume that the city was in a downward spiral.

But since its launch in July, the Downtown Improvement District, under director Sarah Harris, has made remarkable progress. In its first three months the DID: removed more than 300,000 pounds of trash and 4,200 graffiti tags; pressure-washed and weeded hundreds of blocks of sidewalk; reported several hundred panhandling incidents and offered directions and assistance to more than 27,000 visitors.

“It’s hard to overstate the impact of the DID,” said Tom Hoch, president of the Hennepin Theatre Trust. “The new level of cleanliness communicates a sense of order, and that translates to a greater feeling of safety.” Hoch said he looks forward to next summer when the DID begins its greening program.

A facelift won’t solve all of downtown’s ills, but, like they say about chicken soup, it can’t hurt.