When something goes terribly wrong in the techno world, you simply press the reset button and things snap back to the way they were.

Not so in the real world. The kind of severe economic collapse we’re now slogging through imposes a reset on its own terms, not ours. It dictates a fundamental change, a painful realization that the old ways no longer work, that the excessive lifestyles we’ve grown to love cannot be sustained. Too much easy credit. Too much wasted time, wasted energy, wasted space, wasted cost. Not enough preparation for what’s next.

A successful recovery will demand cleaner, more efficient ways of living, traveling, working and arranging our communities if we hope to climb out of our hole and catch the next wave of prosperity.

That’s the message I draw from Richard Florida’s new book, “The Great Reset: How New Ways of Living and Working Drive Post-Crash Prosperity.” The well-traveled writer, now a professor at the University of Toronto’s school of management, equates the current moment to the nation’s two earlier major economic meltdowns — the Long Depression that followed the Panic of 1873 and the Great Depression of the 1930s. The reset that followed each of those episodes transformed the American geography in ways that fit perfectly into the new model for prosperity. It’ll happen again this time, says Florida, but it won’t be quick and easy.

The depression of the 1870s turned the United States from an agricultural to an industrial nation, characterized by the clustering of dense urban neighborhoods around industrial and commercial centers connected by railroads. Powerhouse cities like Detroit, Cleveland and Pittsburgh emerged as mass production ushered in new ways of successful living and working. A sharp distinction arose between home and work. People had jobs “to go to,” so cities began to divide into zones for work, home and amusement, all linked by trolleys. Urbanization was the key to innovation and recovery. 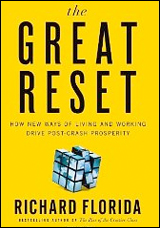 An opposite “spatial fix” characterized the second reset that followed the 1930s depression. An impressive period of discovery and product development (think refrigerators, TVs, early computers), coupled with new forms of infrastructure (especially the interstate highways), brought huge demand for consumer goods on an ever-expanding suburban/exurban landscape. The old industrial cities crumbled in the rush to the roomy fringes of Houston, Atlanta, Phoenix and other booming Sun Belt regions. Suburbanization drove the second reset and pushed middle-class wealth to levels never before imagined.

But now this. What will a third reset require? Florida says that our overspending and undersaving were so intertwined with suburban expansion that the third reset will impose new limits on space, energy consumption, commuting distances and the size of homes. Rather than the relatively cheap food that freed up demand for the consumer goods and fueled the second reset in the 1930s, ’40s and ’50s, reduced expenses for housing and transportation will be needed this time to free up recovery investments. Florida foresees Americans resettling in mega-regions with denser communities clustered along high-speed rail lines. Modernized infrastructure has always been important to resetting the economy, he says.

Driving and owning single-family homes will be less prevalent, Florida predicts, and lifestyles will be less extravagant, less devoted to owning property and acquiring material things but more attuned to investing in experiences. Innovation, he says, will flow from the greater proximity people will have to one another and the face-to-face exchange of ideas so important in a technical age.

Winners and losers
Richard Florida burst on the scene with great fanfare in early 2000s with two noteworthy books, “The Rise of the Creative Class” and “Who’s Your City?,” and quickly emerged as a kind of guru to a generation of young city planners and urbanist developers. His popularity stemmed not from exhaustive research — his methods were often questioned — but from his keen observations about American cities.

In the chase for talent, cities were sorting themselves into winners and losers, Florida said. His observations rang true, even though many liberals considered them elitist and many conservatives attacked his apparent disdain for suburbia and social intolerance. When I finally met Florida at a coffee shop on Nicollet Mall in 2006, he was urging states not to pass laws targeting gays and immigrants. “It would be like putting up a gigantic sign,” he said. ” ‘Innovative, entrepreneurial young people; go elsewhere!’ ”

Since then, the bursting of the dot.com and housing bubbles hasn’t deterred Florida from his basic message. If anything, the economic slide has made his formula for successful cities more prescient than before.

Huge political challenge ahead
Convincing Americans in political arena that living and working on a smaller footprint is a key to recovery will be a challenge of epic proportions. Jimmy Carter failed to make the case in the late 1970s and President Obama seems reluctant even to try. Florida believes, however, that the current deniers will eventually run smack into market reality; people will simply be unable to afford the extravagance of the suburban/exurban lifestyle with its traffic jams, subsidized driving, wasted time, damaged resources and excessive distances.

Urbanist thinkers like John McIlwain of the Urban Land Institute and Christopher Leinberger of the Brookings Institution bolster Florida’s argument with dire forecasts about the future marketability of the large suburban house. “The next slum?” was the question Leinberger famously asked in his 2008 Atlantic Monthly piece about suburbia.

Florida doesn’t get that graphic, although he’s clear that retrofitting the suburbs into denser places that mix housing with jobs, work and shopping will be the primary redevelopment task in the years ahead.

The challenge, he says, is to hasten the transition while spurring “a new geographic framework in which new living habits and work habits can take shape.” To accomplish that, investment (public and private) must flow to “new infrastructure that can move beyond the constraints of our current energy-inefficient, environmentally destructive, time-devouring infrastructure. We need to increase the velocity of moving people, goods and ideas.”

All of that should prompt a hefty discussion about how the Minneapolis-St. Paul metro might improve its chances for a successful reset. Next week we’ll hear some contrary views from Joel Kotkin, whose new book “The Next Hundred Million” sees population growth coming to our rescue. Sometimes described as an “apologist for sprawl,” Kotkin is a respected commentator who sees little wrong with the current suburban form or, for that matter, with our dependence on the auto. Despite demographic trends to the contrary, he expects the traditional family to retain its primary place in the metro geography of the future.

Recession recovery: Urbanist Richard Florida says it will mean huge changes in how we live