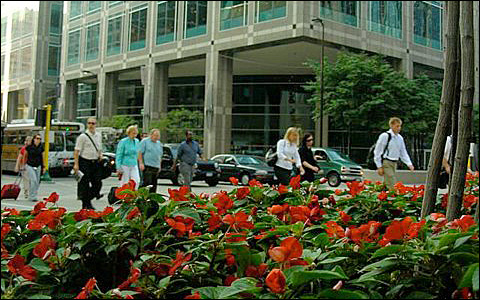 Minneapolis’ Downtown Improvement District marked its first anniversary last month with little fanfare. That’s too bad because it deserves a standing ovation. After only 13 months on the job, the DID has become an indispensible presence on downtown sidewalks.

The city is far cleaner and greener than it was. It’s friendlier, too, and safer, thanks to the yellow-clad ambassadors who sweep, wash, smile, tend flowers, offer directions (and occasional umbrellas) and provide the police with extra sets of eyes on the street. They’ve become, in effect, the face of a city that seems finally to have overcome its indifference to pedestrians.

That’s an important step because a happy pedestrian is the key to a successful city. In the world of walkability, perception is reality. If a street looks shabby, if there’s litter lying about, if sidewalks are dirty and stained and carry the scent of urine, if no one has planted trees and flowers, if loiterers and panhandlers seem to have taken over, then confidence departs. Even if there’s no real danger people won’t walk down the street. They won’t buy things. They won’t want to work, live or shop in that area.

When that happens, the core of the city suffers, and when the core suffers the entire metro area stands to lose because, as any good urban geographer will tell you, a metro area with a strong core stands a far better chance of keeping and attracting “human capital,” and human capital is the thing that builds competitiveness and prosperity for the wider region.

Property owners kicked in $6 million
Downtown Minneapolis was heading toward shabby until the DID showed up. City Hall could no longer afford to “deliver the level of service” expected in a major downtown, so property owners agreed to toss an extra $6 million a year into a pot to fund what’s essentially a private takeover of the public sidewalks. (The city prefers the technically correct term — partnership.) 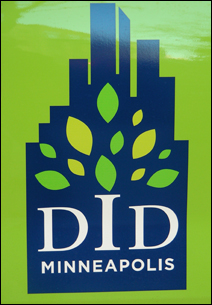 That’s not unusual. Most successful downtowns (Seattle, Denver, Chicago, etc.) have forged public/private districts to enhance public spaces. In Minneapolis, it’s a piece of a wider transformation. The city is trying to shake loose from its 1960s model (drive to your office in the morning, have lunch in the skyways, avoid the sidewalks, drive home at night) to a new-century model that emphasizes transit, walking, biking and experiencing the city at sidewalk level. With a recession stalling new condo and office development, the DID is seen as an important table-setter for future growth when building eventually resumes.

The DID can’t cure everything. Retail continues to struggle as downtown hemorrhages jobs to the recession and to the southwestern suburbs. Homelessness lingers. Residential construction is at a standstill. The landscape is still dotted with derelict surface parking lots. In winter, property owners are still allowed to pile snow in ugly windrows along the curbs. (Hauling the snow away would break the DID budget.) Nevertheless, you get the impression that an important corner has been turned. There’s a new default downtown, and it’s the expectation of cleaner, greener and safer.

“Our task is to keep a critical mass together…and to make the city attractive for investment,” said Sarah Harris, the district’s CEO. “We want to keep and attract business and talent. The recession makes that emphasis even more critical.”

The DID swept up nearly 800,000 pounds of trash from the sidewalks last year. It removed nearly 6,000 graffiti tags. It filled planters and pots with flowers and greens along eight major streets — and aims to expand its greening program. 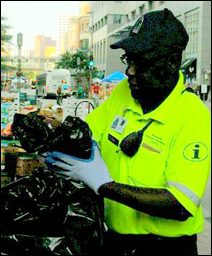 MinnPost photo by Steve Berg
An ambassador empties the trash on Nicollet Mall.

In big ways and small, the DID assisted nearly 60,000 pedestrians, usually with directions or suggestions of what to see and do. One man, in the excitement of going to a ballgame at the new Target Field, forgot where he parked his car. He wandered around endlessly looking for it. Finally, a DID ambassador rescued him. By asking a few questions, she was able to identify the street and block where the car had “gone missing.”

Food carts or food trucks?
Every day pedestrians stop to compliment ambassadors on the job they’re doing. About 40 people per week follow up with emails. “You are a real element in the improvement of the quality of life,” wrote one woman who identified herself as “The Spoiled Suburbanite.” A visitor, “Mindy in North Carolina,” wrote: “I can’t stop telling my friends about what a wonderful city you have. This was my first visit and I was blown away with how friendly, clean and safe the downtown area is! Ambassadors showed my mother and me an extra measure of kindness one day in the rain. How hospitable and friendly and helpful they were to us. I hope I’ll be able to visit again soon.”

Ambassadors are also a part of the city’s effort to convince pedestrians to give to charity, not to panhandlers. As for safety, they tip off police to illegal activity. Last week, for example, observations by the DID led to the arrest of three drug dealers near the main downtown bus station.

The DID does face challenges. Some property owners expect DID crews to clean up their properties when, actually, the crews concentrate on public spaces. It’s an open question whether the DID will emerge as a major “programmer” of sidewalk space. It had hoped, for example, for small food carts to help energize downtown sidewalks. What it got from City Hall were trucks, some of which, the DID fears, are too large and heavy, and might, in some cases, damage sidewalks.

But, all in all, the first year has been a smash hit. Among the DID’s future projects? A summertime Art Market (on Hennepin Avenue?) to supplement the popular once-a-week Farmers Market on Nicollet Mall.