Thinking ahead isn’t something Americans are good at. We’d rather spend money now than save for later. Our politicians worry about the next election, not the next generation. Our companies obsess over quarterly earnings. We’d rather not “get ahead of ourselves.” Indeed, planning, as a public discipline, is demonized in some circles as social engineering, a kind of radical interference in the natural order of the market.

But since the onset of the Great Recession in 2008, when arguably the absence of sound planning sent the housing and financial markets into a tailspin, planning has made a comeback. With almost no new homes and businesses coming out of the ground, urban planners and thinkers have had a lot of time to anticipate what’s likely to come next and to position their communities to take advantage when construction resumes.

Mostly they expect an era of scarce resources and heightened competition. Future prosperity will be won by those metropolitan regions that have taken advantage of the lull to recalibrate themselves to a “new normal.” Cities that are ready for compact development, energy savings, alternatives to driving, aggressive workforce training and quality-of-life attractions will have a leg up.

That’s the back story to why 50 high-level metro planners and advocates gathered on Monday at the McKnight Foundation’s riverfront digs in downtown Minneapolis to discuss, of all things, indicators.

If money is to be scarce, then precise, reliable indicators will be needed to measure progress in meeting the demands a changed marketplace. Finding ways to measure “sustainable growth,” for example, or “plentiful housing and transportation choices,” or “unified regional prosperity” will give the Minneapolis-St. Paul metro a better chance to win the prized federal funds and foundation grants needed to compete with rivals.

It sounds like wonky stuff, but the aim is to use statistics to show where MSP should focus its efforts to match the next market. Conditions are changing.

Start with influence of demographics on housing types. By 2020, two big segments of the population will boom — those between 55 and 70 and those between 25 and 40 — while the middle segment (40-55) will decline, bringing a steep reduction in the percentage of households with children.

The upshot? Low demand for traditional single-family homes and much higher demand for small-lot homes and urban-style apartments and condos.

“Seventy-seven percent of Generation Y plans to live in an urban core,” according to the Washington-based real estate research firm RCLCO. [PDF]

The market for those first-time buyers/renters will be the largest ever between 2013 and 2018, the firm projects. These young customers (born mostly in the 1980s and ’90s) hope to live in walkable, close-in neighborhoods, the firm says. The big challenge will be to produce infill housing in both the cities and suburbs that they can afford.

The overall trend, RCLCO says, is a greater desire for high-quality density, or, as it says, “trading place for space.”

Transit service is an important draw, research shows. RCLCO found, for example, that Portland’s $54 million investment in streetcars produced $3.8 billion in infill development, precisely the kind of housing and urban context that future customers are hoping for.

Shifting jobs away from transit
At Monday’s meeting, Caren Dewar, director of MSP’s Urban Land Institute office, urged the group to take note of these market changes and asked for more emphasis on economic development and workforce training. Others, including Russ Adams, director of the Alliance for Metropolitan Stability, asked for more attention to MSP’s extraordinary income gap between whites and non-whites.

Another indicator that received too little attention, in my view, was job location. There was plenty of talk about gathering data on the number of homes built near transit lines, but none on jobs near transit.

It has been too easy for employers to simply shift jobs away from transit, often to what seems a cheaper location on the metro periphery, reachable only by car. As it turns out, those are expensive decisions. They add to traffic congestion and pollution as well as to the cost of roads and the commuting cost for employees. This shift of jobs away from transit-rich areas has been a clear trend in the MSP metro, but hasn’t received much attention.

Downtown Minneapolis offers a prime example. The real-estate research firm CBRE found that 24 times more office space was added in the western suburbs between 2002 and 2008 than in downtown, which has the metro’s largest share of transit service. According to the Center for Transit Oriented Development, the Hiawatha light rail line, while a success in attracting riders and housing (more than 6 million square feet downtown, according to one accounting), has been a failure in attracting jobs. Indeed, by some counts, downtown has lost 10,000 jobs since Hiawatha’s arrival in 2003. Large expanses of undeveloped commercial property lie adjacent to four of five downtown light rail stations. 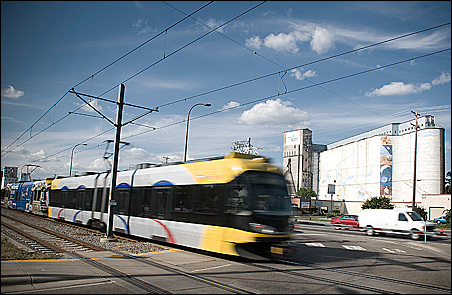 MinnPost photo by Raoul Benavides
The Hiawatha Line, while a success in attracting riders and housing, has been a failure in attracting jobs.

Emerging economy could exacerbate trend
My concern is that the emerging economy, with its emphasis on low-end jobs, will exacerbate this trend. Companies won’t want to add back-office jobs in the high-land-price locations served by transit. Banks, meanwhile, may be more willing to lend money for simple construction projects in remote locations rather than on the more complex sites that tend to be served by transit. As jobs begin to reappear, measuring job location trends will be important.

Mark Vander Schaaf, director of planning and growth management at the Metropolitan Council, said planners are aware of the mismatch. There’s nothing much that can be done, he said, other than “getting more in the heads” of corporate decision makers. In other words, there must be a better awareness about marketing transit-oriented job locations to private firms.

But not only to private firms. It’s ironic that government has set such a poor example. While Minneapolis touts its transit-friendly downtown, its school board recently turned down a new headquarters site near a light rail station and chose instead a site that will encourage employees to drive. That decision came a few years after the city’s Park Board shifted its headquarters away from a transit station to a car-dependent site. And just last week, Hennepin County announced it would move 300 employees away from a downtown light rail station to a new site in Brooklyn Park.