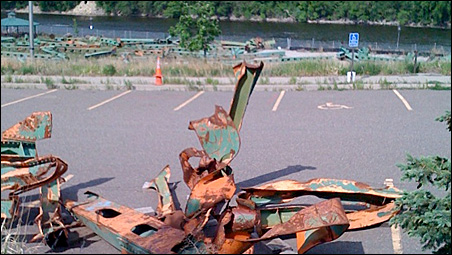 Photo by Karl Pearson-Cater
Wreckage from the bridge still sits in the Bohemian Flats area on the Mississippi’s West Bank.

Rather than hide the twisted wreckage of the fallen Interstate Hwy. 35W bridge in a remote suburban storage yard, as the Pawlenty administration apparently intends to do, a portion of the debris should be resurrected as a sculpture not only to memorialize the tragedy’s victims but to remind everyone that there’s a terrible price to pay when government skimps on the basics.

My nomination for locating this stark piece of public art is an empty lot at the north end of the bridge, at University and 10th Avenue S.E. Everyone crossing the new bridge could see a remnant of the old one. No one could forget the horrible events of August 1, 2007, or the heroic rescue of survivors, or the absolute shock that such a thing could happen in a supposedly advanced country. And no one could fail to see the consequences of neglecting basic infrastructure, a topic too boring for most people to care about. (Tax cuts and memory loss carry greater appeal.)

OK, that’s my personal rant and admittedly political response to last week’s news that MnDOT will soon cut up and transport the pieces of bridge wreckage from its fenced-off resting place at Bohemian Flats on the West Bank to a site in Afton. It’s good to hear that the scattered remnants will soon be gone from the riverbank and some sense of normalcy restored.

Yet, transporting all of the wreckage “out of sight, out of mind” satisfies an opposite political impulse, one that suggests that the bridge collapse was just a random act of fate, a “natural disaster” best forgotten. Any governor with an eye on the White House, for example, might try extra hard to get the bridge pieces crated up and carted away to a remote hiding place. All those memories would be systematically disremembered: no recollection of badly designed gusset plates and buckled chords, of inadequate inspections and postponed repairs, of a MnDOT politicized by an unprofessional (at the time) commissioner, of repeated opposition to raising the revenue required for bridge repairs.

Memorial garden may move across the street
Actually, plans are under way for a fitting memorial that will satisfy neither my view nor the opposite side but rather the wishes of those most personally and sensitively involved: the families and friends who lost loved ones on that terrible day.

Minneapolis Mayor R.T. Rybak has been quietly working with the city’s Park Board, MnDOT officials and the families of victims to shift focus from a memorial garden within Gold Medal Park to a site across West River Road near 11th Avenue South. Lease arrangements for the privately built Gold Medal Park next to the Guthrie Theater don’t guarantee that it will be a park in perpetuity, so a new site for the memorial garden — this time on Park Board property — seems like a good idea, especially if extra money is raised to maintain it at a higher level than ordinary park property. 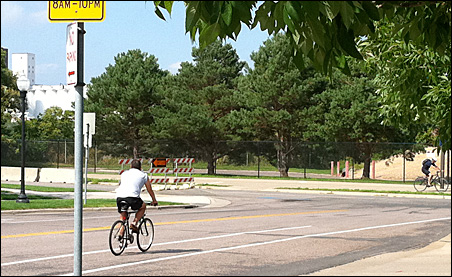 MinnPost photo by Steve Berg
A cyclist on 11th Street South heads toward the area across West River Road where a memorial garden may be sited.

Mayor and designer respectful of families
Specifics could be announced as early as next week. The new site, if officially selected, may lend itself to a more linear design with an overlook of the river and the new bridge. Tom Oslund, principal of the Minneapolis landscape architecture firm Oslund and Associates, will design the memorial. He declined to comment on the new design or the new site until there’s consensus among the survivors’ families.

“It’s easy to get caught up in these events and forget the human emotion involved,” Oslund said. “I want to be extremely respectful of the people who have gone through this at a level that the rest of us can’t really know about. Those people are still healing; the scars are still raw.”

Oslund said he’s not interested in using any of the bridge wreckage as a component of the new memorial project.

At the old Gold Medal Park site, Oslund’s plan called for a garden with 13 pillars, each representing one of the eight men and five women who died when the bridge fell. Oslund has a reputation for sensitive design. His recent work includes Gold Medal Park and Target Plaza, the entryway to the Twins’ new ballpark.

Mayor Rybak also declined to comment on the memorial project. His spokesman John Stiles said the mayor’s first priority is to respect the wishes and feelings of the families involved.

My point is not to disrespect the wishes of families who lost loved ones but to suggest that the wider public also has an interest in remembering that terrible day and learning from it.

Whatever happens with memorial garden, don’t hide all of the I-35W bridge wreckage