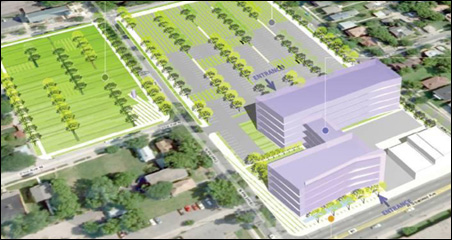 Courtesy of Mortenson Development
This rendering shows the proposed design for the headquarters’ parking lot.

Minneapolis’ 2009 “Plan for Sustainable Growth” is among the most forward-looking comprehensive planning documents in the country. It anticipates a city that will merge dynamic urban-style redevelopment with transit and other transportation options. It encourages infill projects that match the traditional urban form rather than mimic the wide-open spaces of auto-only suburbia.

It’s troubling, then, that the Minneapolis Board of Education seeks approval for a vast 587-car surface parking lot next to its new suburban-style headquarters building planned for West Broadway. The lot would cover nearly two city blocks straddling Girard Avenue, just to the north of the new building. It would offer more than enough parking spaces for each of the system’s 530 employees to drive to work alone.

That’s not the kind of sustainable redevelopment you expect from educators. That’s not the example you hope to get from people charged with teaching children. Clearly, the school system’s design fails to live up to the spirit — and perhaps the letter — of the city’s comprehensive plan.

Big parking lots (even if mitigated by a few trees) “can have serious negative visual effects on their surroundings,” the plan notes. But more fundamentally than that, this parking plan maximizes a dependency — driving — that the city wants to minimize. The new headquarters is sited 10 blocks east of the nearest proposed light rail station (the Bottineau Line’s station at Penn Avenue and West Broadway). Moreover, the site plan, as posted on the school system’s website, [PDF] turns its back on West Broadway, the street it hopes to energize, locating its entrance on the back, next to the parking spaces.

The school board’s defiance of the city’s plan should be part of the debate next week when the Planning Commission considers the site design. Surely transportation choice and parking aren’t the only factors in siting a new school headquarters. But if a city aims to become sustainable, then its education leaders ought not to be so clueless when it comes to sustainability.

The FBI’s new suburban compound
The FBI in the suburbs? It’s just not right. I still picture the feds in gray suits and wide-brimmed hats cuffing the crooks and hauling them downtown for questioning. They pull up to the curb in a 1940s sedan, jump into an elevator and ride to the upper floors of the Acme Building as the city lights sparkle below.

But apparently that’s not the post-9/11 FBI. Now the feds figure they need a secure compound with lots of “perimeter.” That’s one reason construction has begun on the new Minneapolis field office that won’t actually be in downtown Minneapolis anymore but miles away near the site of the abandoned Brookdale mall in Brooklyn Center. Construction of the $61 million fortress is now under way.

While the project is welcome news for an ailing suburb, it’s another crusher for downtown Minneapolis’ dwindling job scene. And it adds another government agency to my own “most wanted” list: public jobs fleeing the mass transit grid.

First came the Minneapolis Park and Recreation Board’s move in 2002 to a new auto-oriented site on the Mississippi River. The move came just as the Hiawatha light-rail line opened a block away from the former Park Board offices.

Then came the Minneapolis Board of Education’s rejection of a site near the Metrodome LRT station for a new suburban-style building on West Broadway, as mentioned above.

I know that many factors go into decisions about job relocation. But I doubt that transportation, commuting expenses, highway congestion and energy savings play much of a role, if any. If it’s going to be public policy to invest in rail transit and other efficient ways of moving people from home to work, then government, if not the private sector, should give some consideration to these factors when building new facilities.

The current trend — moving jobs away from transit — reinforces auto dependence and serves as a bad example for private players. If government agencies won’t support efficient transportation/land-use policies, then why should private investors support them?

Mike Christenson, Minneapolis’ director of Community Planning and Economic Development, said the city “turned over every rock” in trying to find a suitable site for the FBI in transit-friendly downtown. But cheap land and FBI’s new security requirements (no co-tenants and no underground parking) handcuffed the city.

The Sid Hartman statue
Question: If the logos of the Star Tribune and WCCO set to be included in the statue of Sir Sidney violate Minneapolis’ sign ordinance prohibiting commercialism on public walkways, then what about other statues? Must the TC logos on the batting helmets of Kirby Puckett, Harmon Killebrew and Rod Carew also be shaved off?

Burger King at Hennepin-Washington?
One of the most prominent intersections in downtown Minneapolis, once called The Gateway, is three-quarters derelict. Only the northeast corner of Hennepin-Washington is currently occupied — by Minoru Yamasaki’s arched masterpiece, the former Northwestern National Life Insurance building. Still, the city has high hopes that buildings and a park will emerge on the other three parcels once the economy revives. A park on the so-called North Library block has long been considered. Residential towers in the 15-30 story range were once promised on the Dolphin property (the southwest corner) and on the former Jaguar dealership property, where a Whole Foods was also expected.

In metrospect: Three of this week’s best stories
Question for local governments seeking revenue: How many Walmarts does it take to equal one mid-rise, mixed-use building? Answer: Five. Philip Langdon at New Urban News tells of two studies comparing the tax revenues generated by a typical big-box suburban retail store versus a 17-story urban-style building. The building, situated on three-quarters of an acre in downtown Sarasota, Fla., contains retail on the main floor, offices above, and residential units on the upper floors. It produced $1.2 million per acre in property tax for Sarasota County, Langdon reported, the same amount produced by 145 acres of big-box retail. That’s about five Walmarts, according to a county official. Another study in Asheville, N.C., showed similar results.

Comment: For a car-oriented Sun Belt city, Sarasota has a remarkably vibrant downtown district with lots of shops and homes blended together, all a short walk from a nice waterfront park. Asheville has attracted droves of retirees and young professionals because of its gorgeous mountain views and energetic downtown district.

Loitering problem? D.C. tries ‘Mosquito noise.’ Aimless teenagers who get into fights and intimidate pedestrians were hurting business along one of Washington’s busiest retail and entertainment strips. So, business owners this week installed a device that emits an ear-splitting high-pitched noise that only young people can hear. Called the Mosquito, [PDF]  the noise system was placed near the entrance to Chinatown at the Gallery Place metro station.

The Washington Post reported that the local City Council member didn’t know about the installation even though his staff, police and Metrorail officials were consulted beforehand.

The incredible shrinking city. Minneapolis Mayor R.T. Rybak says his city must grow again if it hopes to deliver the services that residents expect. St. Paul Mayor Chris Coleman has turned his city into a real-estate investor in hopes of attracting more people. Obviously neither twin city has given up on growth. But some cities have given up, leading to a new twist for planners: How to take advantage of declining population? How to make a city better by getting smaller?

Detroit, which has lost more than half of its population in recent decades, is leading this new way of thinking. It’s a little like the old “Buffalo Commons” concept of turning the Dakotas and Nebraska back to virgin prairie. The Boston Globe’s Drake Bennett offers an intriguing trip into the world of shrinking cities and the efforts to make smaller better.