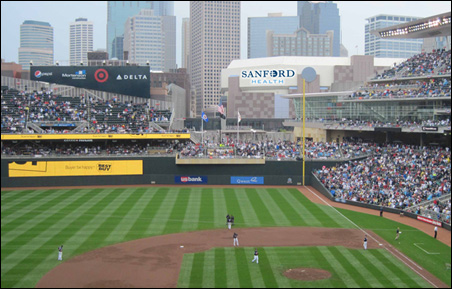 Twins president Dave St. Peter calls it “an ambush on the ballpark.” Minneapolis City Council Member Lisa Goodman calls it, well, I can’t say in print what she calls it. Dan Kenney, director of the Minnesota Ballpark Authority, isn’t happy either.

The object of their wrath is a huge advertising sign that the Minnesota Timberwolves are erecting on the outside of Target Center. By next week the sign will overlook Target Plaza and dominate the signature skyline view from the new Twins’ ballpark.

Apparently there’s nothing that the city, the Twins or the ballpark authority can do to stop it. Although the city owns Target Center, the Timberwolves control the right to erect signs on the outside of the arena — and to collect revenue from them. The new sign’s size (2,800 square feet) and design are within the limits allowed on buildings in the Hennepin-First Avenue entertainment district.

Says Goodman: “The city pays $6 million a year in debt service on Target Center, we pay $1.6 million a year in operating losses, and this year we’ll pay $3.5 million in capital improvements to the building. And this is how we get treated? … This is one of many things that we and the Twins agree on.”

St. Peter says: “While the Twins always understood an ambush on the ballpark was possible, the sheer size of the proposed signage is shocking. We feel particularly bad about how this signage dominates the new civic gathering place known as Target Plaza. Needless to say it’s disappointing considering the large private investment to create this dynamic celebration of public art, which was in essence a gift to the city of Minneapolis.”

Kenney says: “The ballpark authority was thrilled to partner with the Twins, Target and MnDOT to create a dynamic and welcoming public gathering space in downtown Minneapolis at Target Plaza. It’s difficult to see how a 2,800-square-foot billboard adds to these public realm improvements.”

[Update] Timberwolves President Chris Wright said late this afternoon, “We would disagree with those characterizations. We have the authority and the right to take advantage of a terrific development that occurred behind our building. The new ballpark has brought a great deal of opportunity to this part of the Warehouse District and we celebrate that.”

Wright said that Sanford Health is a valued partner with the Wolves in various health, fitness and wellness efforts, including campaigns against diabetes and child obesity. He declined to reveal the amount of revenue the basketball team would get from the Sanford sign.

The team said that the sign’s construction had begun today and that it would be finished in time for next Wednesday’s possible post-season opener at Target Field.

In time for national exposure
That’s just in time for Sanford Health to get noticed by a national TV audience.

The Twins, along with Target and the artists who worked on the plaza, have long worried that advertising signs on Target Center’s exterior could alter the experience for visitors. At least it wasn’t a big Walmart sign, something the team feared most. As it is, the sign competes with Mayo Clinic, one of the ballpark’s advertising sponsors.

The sign represents Sanford Health’s first big marketing presence in the Twin Cities. In 2003, company founder T. Denny Sanford had offered $35 million to the University of Minnesota’s football stadium project, but negotiations broke down and the U ultimately gave naming rights to TCF Bank.

Sanford Health has been active in sports marketing. Last month it gave $10 million to North Dakota State University in Fargo for updating the Bison Sports Arena, the school’s basketball home. Other “health and wellness” gifts are planned for the University of North Dakota in Grand Forks, Concordia College in Moorhead and the Great Plains hockey and sports complex in Fargo.