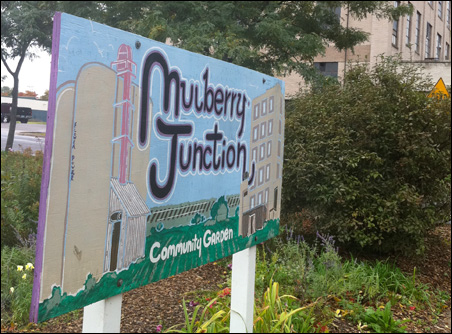 Last Saturday was cleanup day at Mulberry Junction, one of 200 or so community gardens that have sprouted on the local urban landscape over the past decade or so. By mid-morning, a dozen citified farmers were harvesting the last of the season’s string beans, broccoli, beets and cabbages. Then they set about pulling weeds and replenishing compost bins in preparation for next spring’s planting.

Brad Dunham and Terri Sutton, each from Minneapolis, offered this review of the 2010 crop year: great for beans, cabbages and strawberries; not so good for peppers and tomatoes. “Too much rain for tomatoes,” Sutton said, “but we’re on our second yield of really nice raspberries.”

Mulberry Junction sits beside a railroad track in Northeast Minneapolis, tucked between an abandoned grain elevator and a stack of artists’ lofts. There are 40 individually tended plots, most of them 20 x 10 feet, with a few larger parcels thrown in. For a modest fee ($11) everyone gets a piece of ground and access to a city water connection. Tools are shared and everyone is expected to pitch in to maintain the common areas.

“It’s the community part that’s important to me,” Dunham said. “Anyone willing to dig in the dirt is usually a pretty good person to be hanging around with.” Vegetable theft is a rare crime at Mulberry, although there was a broccoli bandit this summer, followed by the case of purloined watermelons. (Dunham lost four or five big ones.) But rabbits and tomato blossom-end rot were bigger pests than humans.

Upward trajectory likely to continue
Hard times have boosted the community-garden movement across the country, and its upward trajectory is likely to continue given the other trends at hand. Many of the gardeners at Mulberry Junction, for example, live in apartments or lack the yard space to grow vegetables. With metro areas expected to become more compact in the years ahead, gardens figure to flourish.

Also playing a part is the broader and growing emphasis on urban farming. Concepts of local food, better nutrition, sustainable communities, energy conservation, environmental impact, feeding the poor, and getting in touch with rural roots all play a part.

Then there’s the real estate bust: A lot of urban land is waiting for development that’s not happening. If Mulberry Junction weren’t a mini-farm it would be waist-high weed patch, dumping ground and neighborhood nuisance. “The owner of this land would like to develop it but there’s no market now,” Sutton said. “So we’re happy to be here.” 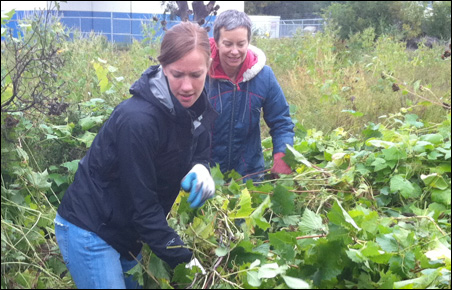 The big surprise for urbanites like me is how much food you can get from a small patch of land. “People don’t realize,” Dunham said. “All it takes is a little dirt, a little sun and a little work.” Well, quite a lot of work, actually, but the Mulberry gardeners seem to enjoy it.

Boo: To the Timberwolves for desecrating Target Plaza with a huge advertising sign. Twins President Dave St. Peter called the size of the sign “shocking” and said it mars a civic plaza intended for public art. He said the team had long feared “an ambush” by the Wolves.

My view is that the sign, while perfectly legal under the city’s ordinances, is out of scale with the plaza. The plaza does advertise, but in a subtler way (Target logos are embedded into the pavement and Twins players are featured in statues.) The Sanford Health sign is an intrusion not because it’s advertising but because it’s too big.

Cheer: To Minneapolis Public Schools for postponing the surface parking lot proposal that was to have come before the Minneapolis Planning Commission last week. The school system wanted a 587-car surface lot next to its proposed headquarters building on West Broadway. Some planners (and Cityscape) had objected to the size of the lot and the suburban design of the site. The plan is hardly the kind of sustainable example you want a school system to set. Here’s hoping the school system comes back with a better idea at the Planning Commission’s Oct. 4 meeting.

In metrospect: Three of this week’s best stories

Woody Allen on religion, death and New York
For 40 years he’s been the essential urbanite, neurotic filmmaker. His interview with Dave Itzkopf in the New York Times brings back all those magical street scenes of Allen in his native habitat. At 74, he’s still contributing to America’s idea of what it means to be a city dweller.

Beauty: It’s making a comeback
Four decades ago beauty was cast aside as poststructuralist thinkers (Foucault, Derrida, etc.) dismissed it as a mirage set up by those with economic and educational advantages to reinforce their own power over the world. Now, as any urban planner knows, beauty is peaking through almost everywhere, even during hard times when cities can least afford it. Beauty sprouts from the ruins of old industrial buildings, from median strips near suburban malls, from clay pots set near the doorways of otherwise ordinary businesses. Maybe we need beauty now more than before.

Arthur Krystal’s review in last month’s Harper’s of Emberto’s Eco’s new book “History of Beauty” is a good place to get reacquainted with the discussion. Talking about beauty in the urban context shouldn’t be an embarrassing thing. Deconstruction is over.

Future of progressive government requires population growth
Population growth is essential to a civilized political culture and the future of successful cities. Phillip Longman’s piece, “Democracy and Demographic Destiny,” spells out the problem facing nations with declining birth rates (Europe, Japan); they’ll no longer be able to afford the social support systems upon which modern democracies depend. In other words, you must have taxpayers to support not only elderly pensioners but the broader projects that civilizations need in order to thrive and succeed.

Longman’s message is similar to the narrower gospel that Minneapolis Mayor R.T. Rybak has been spreading: His city — and other older cities — must maintain and grow middle-class population if they hope to deliver the services residents expect.