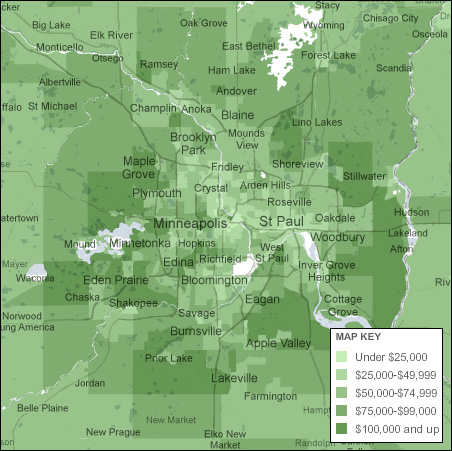 Comparing Minneapolis to St. Paul is part of the local ritual whenever census statistics begin to flow. But the more relevant contrast emerging from last week’s big data dump is between the struggling central districts of both cities and the ring of growth and prosperity that surrounds them. That’s the real tale of two cities.

The problem isn’t that the metro area as a whole fails to stack up against its national competition — places like Denver, Seattle and Portland, often considered MSP’s “peer” metro regions. It’s that on matters of income, race and geography the metro area’s inner districts — most of them in Minneapolis and St. Paul — have begun to more closely resemble troubled places like Cleveland, St. Louis and Milwaukee, places that don’t compete nearly as well. The concern is that MSP’s weak central districts will become a drag on the region’s competitive edge — that we’re sliding more toward the Rust Belt than we’d like to admit.

The pattern looks almost scary when you see it on maps generated from the new 2005-2009 American Community Survey. It’s the doughnut shape that urban geographers worry so much about. The metro region’s central districts (the doughnut hole) are remarkably poorer than their surroundings and appear to be continuing their long population decline, while the doughnut itself is doing fine. (We’ll have more precise information when the final 2010 Census numbers begin to trickle out later this week.)

In contrast, Denver, Seattle and Portland have each added big chunks of central-city population in recent decades, and their urban/suburban contrasts on race and income aren’t nearly as sharp as ours. Chicago’s map, perhaps, shows best what filling in a doughnut hole looks like. One encouraging note: If you take a close-up look at Minneapolis, you can see the very beginnings of a similar trend, with higher-income households staking out a small beachhead along the downtown riverfront.

But that’s not yet nearly enough to blunt the overall trend. Concentrations of poverty have spread considerably in the central cities; 22 percent of Minneapolis residents and 20 percent of St. Paul residents now live below the poverty line. That’s up 30 percent from a decade ago. And it’s a share of poverty that’s double the size of Seattle’s or Denver’s.

What follows are details from the Community Survey gathered around three questions: Are Minneapolis and St. Paul still twins? What feeds the growing gap between city and suburb? And now does the MSP metro area stack up against its national competition?

Still Twins? Minneapolis and St. Paul
• Population: The first thing to notice is that their populations have remained relatively stable, with Minneapolis still hovering below 400,000 and St. Paul still below 300,000 (if the 2005-09 estimates hold true). That’s a disappointment for both cities. Minneapolis, once confident that it would climb back above 400,000, suffered the departure of thousands of Mexican immigrants when the economy turned sour, as well as a substantial number of blacks who shifted to the northern suburbs. The city failed also to gain thousands more suburban converts when the housing market tumbled and 50 downtown condo projects were canceled. Both mayors say that the central cities must begin to claim a larger share of upscale metro population growth in order to keep up with the demand for services. But that’s a difficult task if concentrations of poverty continue to spread and school systems continue to struggle.

• Income: Both central cities grew markedly poorer over the last decade. Average incomes hover around $46,000 in each city. Adjusted for inflation, that’s down by 6.7 percent in Minneapolis and 7.7 percent in St. Paul from a decade earlier. Minneapolis appears to be both richer and poorer than St. Paul, and a bit less settled. In all, more than 25,000 housing units stand empty, with vacancy rates nearly tripling from 10 years earlier.

• Demographics: Age profiles are remarkably similar, with St. Paul tilting slightly more toward female and elderly. Increasingly, Minneapolis is becoming a city of singles, many of them living alone. Its average household size (2.19) is among the lowest in the nation, approaching the levels of singles-dominated places like Manhattan (2.11) and Seattle (2.04).

• Ethnicity: The cities have distinctive ethnic personalities. Minneapolis has nearly twice as many black residents while St. Paul has more than twice as many Asians. Hispanic populations have grown on both sides of the river. Whites continue to constitute about two-thirds of the population of each city, although the white share in Minneapolis appears to have grown slightly over the last decade.

• Immigrants: The foreign-born population, which boomed in the 1990s, remained relatively stable over the last decade as more immigrants chose to live in suburbs. Still, St. Paul has an especially exotic mix of cultures, with nearly a quarter of its children living in homes where English is not spoken.

• Education: Despite the decline in incomes, residents showed gains in educational attainment in both cities. Minneapolis residents are slightly more educated, on average, with 43 percent holding at least a four-year college degree.

Tale of two cities: Central vs. metro
• Population: The metro population, estimated at 3.2 million, appears to have grown only half as fast in the first decade of this century (7.9 percent) than during the go-go ’90s (16.9 percent). Virtually all growth has been in the suburbs, with Minneapolis and St. Paul continuing to make up a declining share of all metro residents. Only 20 percent of metro residents now live in the central cities, down from 25 percent in 1990. (Those are 2005-09 estimates with the official figures still to come.)

• Income and race. The sharpest contrasts among metro populations involve income, race and geography. City residents are, on average, 30 percent poorer than metro residents as a whole. Household incomes in Minneapolis and St. Paul average $46,000, while household incomes metrowide exceed $65,000. The disparity stems largely from a relatively few concentrations of poverty that push central city averages lower. Altogether, more than 20 percent of Minneapolis and St. Paul residents live below the poverty line, compared with 8.8 percent of metro residents.

Despite poverty concentrations — largely in north Minneapolis and along stretches of central and east St. Paul — it’s important to emphasize that many city neighborhoods are no poorer than many suburban neighborhoods. These observations can be examined on the Google-New York Times interactive map.

Race continues to play a part in the discussion, and there’s little in the new data to suggest a reversal of MSP’s dubious ranking as one of the most segregated (by race and income) metro areas in the nation. Indeed, if you’re black and live in the city, you’re almost certain to live in a majority black neighborhood — and those neighborhoods are far more likely to have lower incomes. Take, for example, Census Tract 336 in St. Paul, south of University Avenue between Dale Street and Western Avenue. The area is 76 percent black and has an average household income of $13,000, down by 53 percent in the last 10 years. Use the interactive map to compare that tract to the wealthier, whiter ring that surrounds the city’s inner districts.

That’s not the whole story on race, however, and perhaps not the most significant one. For the first time, blacks in suburbia may outnumber blacks in the central cities. In 2000, 65 percent of blacks in the metro area lived in Minneapolis or St. Paul. By 2009, the share had dropped to 43 percent, according to survey totals. If those estimates hold up, a large share of African-Americans and East African immigrants have changed their addresses to suburban over the last decade, largely to Brooklyn Center, Brooklyn Park, Richfield and east Bloomington. Indeed, the suburbs appear to have become the settlement choice of immigrants as foreign-born residential numbers remained relatively unchanged in the cities.

Competing nationally
• Population. In recent decades the metropolitan region has become the prime geographic unit of competition for jobs, prosperity and identity. The 13-county Minneapolis-St. Paul metro region seems likely to hold its place as the nation’s 16th largest, just below Seattle and above San Diego. While MSP compares favorably with peers on most Community Survey measures, it grew more slowly than Seattle over the past decade and at only half the rate of Portland and Denver.

• Demographics. MSP is slightly younger than its peer regions and a bit more homogeneous. Whites make up 86 percent of the metro population, slightly higher than in Denver and Seattle where large Hispanic (Denver) and Asian (Seattle) populations make an impact on the ethnic mix. MSP has a considerably larger black population than its peers, but a lower ratio of immigrants. Immigrants make up just 9 percent of the MSP metro compared to 12 percent in Denver and Portland and 15 percent in Seattle.

• Income and education. MSP has a higher median household income than its peers ($65,000) and a lower poverty level (8.8 percent). It also has a greater share of homeowners. Only 26 percent of MSP residents are renters compared to 33 to 37 percent Denver, Portland and Seattle. MSP also has fewer vacant homes (5.8 percent) than its peers. On education, MSP has a slight advantage with greater share of high-school graduates (93 percent) and a comparable share of residents with at least four years of college (37 percent), a percentage matched by Seattle and Denver.

• City/suburb comparisons. This is where MSP falls short and causes reason for concern. The data show that residents of the central cities of Seattle, Portland and Denver aren’t much different than residents of their metro areas as a whole. City residents are more likely to be black or Hispanic, but not by much. They are poorer, on average, than residents metrowide, but not by much. And they are only a bit more likely to live below the poverty line.

MSP, however, shows far sharper contrasts between city dwellers and metro residents as a whole, especially on race and income. Whites, for example, account for 86 percent of the MSP metro population, but only 68 percent of central city residents. Minneapolis and St. Paul households earn, on average, nearly $20,000 less per year than do metro residents as a whole. And they are 2.5 times more likely to live below the poverty line.

By contrast, Seattle households earn only $5,000 less on average than those in the metro area as a whole, and the city’s share of those living in poverty is only a fraction greater than the metrowide share.

Indeed, the MSP gap on race, income and geography resembles more closely the stark divisions in cities like Cleveland, St. Louis and Milwaukee. In each of those places, central city household incomes are about $20,000 less than metrowide averages, and poverty is far more likely. Race is an obvious and compounding factor, with blacks far more likely to be concentrated in central districts. In Cleveland, for example, blacks make up half of the city’s population but only 20 percent of the metro share, and city households make only 58 percent of the income of metro households as a whole.

For the MSP, then, the overall picture shows a metro area that competes mostly on the strength of its suburbs and in spite of its relatively weak central cities. To sharpen its competitive edge, MSP must strengthen its central cities, either by importing higher income households or improving the lot of existing city dwellers. Or both.