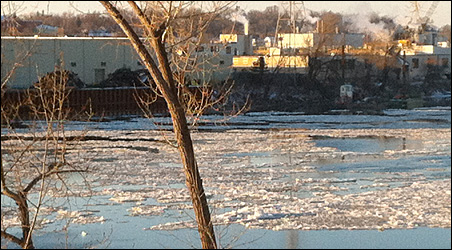 MinnPost photo by Steve Berg
Industry lines much of the Upper Riverfront in Minneapolis.

It takes a vivid imagination, even for some of the world’s best designers, to conceive a grand future for Minneapolis’ Upper Riverfront, lined as it is with scrap yards, low-slung industrial plants and sparse patches of woods that often seem less lovely than forlorn.

And so, it was only fitting that during their site visit this week the four teams competing to redesign the waterfront were pelted with a brutal blast of sleet and snow that must have left them wondering why anyone would venture out to the river’s edge in the first place.

“I’m actually glad they got a reminder that we have four seasons here,” said Mary DeLaittre, principal at the urban design firm Groundwork, who coordinated the visit. “So often people come here in the nice months and their ideas don’t reflect the reality that we have five months of, well, you know.”

Actually, the teams seemed enthused despite the chill. Some designers even bundled up and walked the entire 11-mile stretch of the project.

Toward green redevelopment
It’s all part of an intense competition to design 220 acres of parkland and adjacent mixed-use districts. Sponsored by the Minneapolis Park and Recreation Board and the Minneapolis Parks Foundation, the exercise is intended to jumpstart a decades-long plan for pulling the upper river into the city’s impressive system of waterfront parkways and trails.

Now is the right time to move forward, parks officials say. Using the pause of the recession to plot out new parks should leverage high quality development when building resumes — at least that’s the hope. Throughout the city’s history, public green space alongside water has been a catalyst for building solid, middle-class neighborhoods and businesses. That’s again the aspiration. As Mayor R.T. Rybak said in his budget address last August, Minneapolis must concentrate on growing its population if it wants to remain a viable, productive city. A redeveloped Upper Riverfront is a big part of the strategy.

The four teams will submit plans by Jan. 21, with a winner announced on Feb. 10. Each plan is expected to outline a vision that makes parks an engine for economic development, that transforms the river into a connector rather than a barrier, and that refocuses the city toward one of the world’s great rivers.

That’s a challenge on several levels, said Ken Smith of Ken Smith Workshop of Irvine, Calif. The river gorge downstream from St. Anthony Falls is “drop dead gorgeous,” he said, and the downtown riverfront is loaded with character. But the upper river is hard to reach because industry so closely hugs the waterline and because the terrain itself is rather bland. Still, the upper river offers a huge opportunity, he said, citing his affection for the industrial-style bridges and views of the Grain Belt Brewery and of the church steeples and neighborhoods visible from some points. Looking at the recent transformation of the downtown segment makes him optimistic about the upper river, he said.

Competition draws wide interest
Another competitor, Tom Leader of Tom Leader Studio in Berkeley, Calif., said he was impressed by community groups that “set the table” for the redesign. He said also that he enjoyed the riverfront, even in winter. “The sight of ice floating downstream against the glassiness of the water was amazing,” he said. Other teams competing are Stoss Landscape Urbanism of Boston and Turenscape of Beijing.

The competition drew wide interest because of the project’s extraordinary complexity. How do you protect the environmental integrity of the Mississippi River? (The river is a National Park as if flows through the Twin Cities metro.) How do you create visual drama on a part of the river that lacks natural features? How do you keep industry and jobs while adding parks, businesses and homes? How do you add tax base and residents? How do you convince people that new parks are safe when they’re located next to some of the metro area’s most troubled neighborhoods?

Further complicating the design is the uncertain future of barge traffic and port facilities. “Everyone knows the river is going to change over the next 20 or 30 years,” Smith said. “The question is how?”

MinnPost: The Upper River has been discussed for decades. Why move forward now?

David Fisher: We have the potential to make it work. We have the land, some seed money and a partnership with the foundation. The entire riverfront is in a designated regional park area, which allows us to access multiple funding sources. And there is private sector interest to spur it along.

MP: You say parks nowadays must be multi-dimensional — more than just trees and trails. Could you expand?

DF: Parks are absolutely a driver to growing residential communities. Look at the economic development that took place when the central riverfront was reclaimed in the 1970s, ’80s and ’90s. A blighted industrial area was transformed into a greenway with trails, picnic areas and public access to the river. This resulted in the creation of new residential communities and business development near the riverfront parkland. The design competition expands on this strategy and success. It refocuses the city toward an extraordinary environmental amenity — the river.

Cecily Hines: Parks are an excellent driver for both residential and commercial. People like to live and work near beautiful and vibrant parks and green spaces; property values are higher, physical and mental health is improved, and communities are stronger when there are healthy parks in the neighborhood. By increasing the number of attractive open spaces, we should attract new people and new businesses.

MP: Are you worried about the Department of Natural Resources / National Park Service process of reclassifying riverfront lands? Some planners are concerned that new setbacks and other rules might restrict what the city wants to achieve.

DF: There is concern. We have submitted a request to the DNR that they work with us and the other regional park agencies along the river to ensure that the new standards being developed will not impact the Park Board’s ability to manage its riverfront parklands or prevent recreational services to residents and visitors.

CH: This natural resource deserves strong protection. Right now we are just at a creative conceptual design stage. I am interested in what these talented teams propose. They know that environmental and financial sustainability are important factors. Economic development is also key. But housing and commercial development do not necessarily have to be at the river’s edge.

A cold week on the Mississippi: Seeking new ideas for Minneapolis’ Upper Riverfront