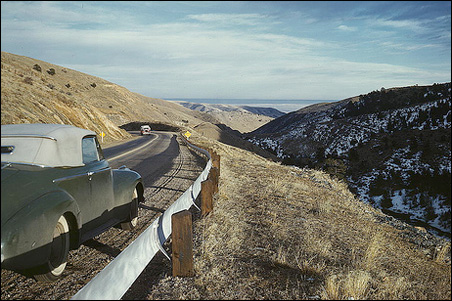 Library of Congress/Andreas Feininger
There’s nothing like the freedom of the open road. But driving is a little like chocolate — a wonderful indulgence that can easily be overdone.

Taking stock is part of celebrating a new year. After all, it’s hard to resolve to do better in the months ahead if you haven’t recognized your weaknesses in the months past. As a blogger aiming to shed light on urban topics (lifestyle, transportation, community design, sustainability, etc.), I fear that my writing sometimes falls too easily into the urbanist chorus, reflexively embracing ideas (mass transit, compact living, etc.) that seem to accuse the suburban mainstream of crimes against the planet.

Given the political reality — a Republican insurgency that has restored conservatism to its dominant role — I’ve resolved to do two things: to listen more intently to critics, and to explain more fully how my urbanist leanings aren’t so elitist as they sometimes sound.

I thought about these things during the holiday hiatus when I ran across a piece in the Milwaukee Journal Sentinel by Patrick McIlheran (reprised a day later in the Strib). McIlheran is a talented conservative with sharp fingernails. My tongue-in-cheek post (Dec. 16) about whether Wisconsin’s decision to drop the Chicago-Twin Cities high-speed rail link blocks interstate commerce and risks a lawsuit from Minnesota, apparently provoked him, as did other pro-rail commentaries.

Hating the automobile?
The result was a classic example of how the political right has perfected the art of seducing the American mainstream, an unhappy group with a short attention span. All McIlheran’s readers needed to know was that rail is a boondoggle; that its “coolness” is part of an elitist impulse that taxpayers shouldn’t have to pay for; and that its advocates are a select fringe of urbanists and greens who “absolutely hate the automobile.”

I deeply admire the political right’s skill in chiseling down an issue this way. You get to demonize your opponent in a few choice words while offering no substantive alternative — and it works! Moreover, you make it hard for the accused to answer in a civilized way, or in a way that doesn’t require detailed (and boring!) explanations. Still, in the spirit of my New Year’s resolutions listed above, I’ll try to patiently explain the urbanist view.

First, it’s right to zero in on the car as the key player in this drama, although “hating the automobile” (a quote from Rep. Michael Beard, the Minnesota House’s new transportation chairman) isn’t part of my profile. I hate cars so much that I own two of them. (That’s down from five when our family included two suburban teenage drivers.) Our cars have nine cylinders between them and about 366 horsepower, so they’re not exactly muscular. Still, they allow my wife and me to burn a respectable amount of gasoline every year, enough to do our part in keeping America beholden to the big oilmen and the sheiks.

Freedom of the open road
In fact, I love to drive. The family road trip was a staple when the kids were small. I can easily recite the roads and distances between Washington, D.C., and Boston or the scenic detours between Minneapolis and San Francisco, then down the Coast Highway to San Diego. There’s nothing like the freedom of the open road.

But for me driving is a little like chocolate. It’s a wonderful indulgence that is easily overdone. When everyone drives a lot, things get out of hand: traffic congestion, air pollution, storm-water runoff, oil spills, greenhouse-gas emissions, oil dependence, foreign-policy complications that sometimes lead to wars, sprawled development, redundant infrastructure, drive-through lifestyles that lead to bad nutrition and obesity — all of these things can be laid, at least partially, on our need and desire to drive excessively.

Surely driving is important, even vital. And maybe its benefit still outweighs its many costs. But I’ve started to wonder. Is it smart to continue relying so heavily and exclusively on the auto? As China, India, Brazil and other rapidly urbanizing societies double and triple their driving miles every decade, and as oil is harder and harder to extract, what’s the likelihood of major price escalations? Even if alternate fuels are developed, maximum driving carries with it problematic costs to the infrastructure and environment. If the object is to move people, why not explore a variety of choices, some of which are more efficient? Surrounding a single person with all of that steel, glass, rubber and fuel seems extravagant. Offering a wider marketplace of choices seems the prudent way forward, especially since it takes decades to develop transit systems and to retrofit communities and lifestyles in ways that reduce the need to drive long distances for every purpose.

Is cheap driving sustainable?
Urbanists are accused of wanting to take away people’s cars and force them to live in tight quarters, but that’s absurd. Urban-style living isn’t for everyone. People should live where and how they want. What urbanists do favor, however, is a system of rules and prices that fairly reflect the costs of people’s decisions. Those who prefer to drive long distances and occupy large footprints should pay a fair cost. Those who choose smaller footprints shouldn’t be penalized by cumbersome rules or burdened by price systems that continue to reward inefficiency and heighten risks to the environment and to national security.

These don’t seem like elitist or radical positions to me. They seem reasonable and downright conservative, even patriotic. They pose no threat to personal liberty so far as I can see. Most important, they are proactive. I’d rather anticipate the future than try to recapture a past that’s already behind us.

Almost no one who has studied these issues believes that the era of maximum driving at a minimum cost can be sustained in the decades ahead. It’s prudent, then, to begin investing in more efficient alternative modes, including high-speed, middle-distance train service between major metropolitan areas. The question about the Chicago-Twin Cities rail link isn’t the cost — it’s small potatoes compared to what we now spend propping up auto travel — but whether the proposed 110 mph technology is fast enough to be truly competitive.

Hate the car? No way. I relish driving more than ever, perhaps because our family has found ways to do less and less driving in recent years. I don’t feel elitist or superior about that; it was just a choice we were able to make, a New Year’s resolution of sorts.

As 2011 unfolds, I hope I can keep this year’s resolutions in mind: to listen more intently to critics, and to explain more fully my not-so-elite views on urban-design topics. I’d like to elaborate, but I promised to wash the cars.