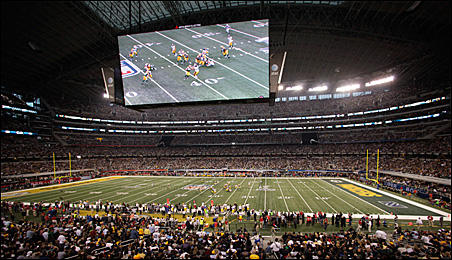 REUTERS/Gary Hershorn
103,219 fans crammed into Cowboys Stadium to watch the Packers beat the Steelers on Sunday.

If you saw yesterday’s Super Bowl on TV and caught even a glimpse of Cowboys Stadium, then you understand Minneapolis-St. Paul’s predicament. The glitzy palace that owner Jerry Jones built (with help from the city of Arlington and the NFL) makes even a fully inflated Metrodome look like a high school gym. To think that the sad-sack Dome actually once hosted the Big Game (it was 1992) seems laughable now and offers a sobering reminder of how hard it is to keep up with the Joneses.

I’m not talking just about football but about the array of sports and cultural venues required to bolster the quality of metropolitan life in America today and to keep major urban centers competitive for the new jobs and prosperity that everyone wants.

Just since 1998, a dozen major sports and cultural buildings have risen in MSP at a cost of more than $1.7 billion in public and private money. A new Vikings stadium plus a new home for the Saints minor league baseball team and a renovation of Target Center, home of the NBA’s Timberwolves, could add another $1 billion to the total.

It’s not the money that bothers me (although most Minnesotans would probably disagree); it’s the political exhaustion. Feeling compelled to explain again and again the reasons for these investments gets to be a heavy load. With Minnesota facing a horrid fiscal dilemma (a projected shortfall that’s nearly 20 percent of its projected budget), it’s harder still to argue for these kinds of projects.

Sports and arts as community glue
Yet I can’t shake the belief that, like it or not, sports and culture are the connective tissue that holds us together as a community; that even if we detest the Vikings or never attend a Minnesota Orchestra concert we all benefit from their presence. If the new Guthrie had not been built, or the Walker, or the Science Museum, or Xcel Energy Center, or Target Field, or the new MIA wing, would MSP be as good a community as it is today? I doubt it.

Not only does the sports/arts glue improve our quality of life, it enhances our competitive posture. Look outside your window. Our climate is brutal. To retain high-quality jobs, attract new talent and achieve prosperity for the next generation we have no choice but to try harder than our competitors. San Diego and Tampa don’t have to lift a finger. Who needs a symphony orchestra or a top-notch art museum or an NBA team if you can attract talent with sunshine and beaches?

Many people try to separate the arts/sports amenity, usually along two lines. The first is what I call the “good arts/bad sports” analysis, which holds that the arts are uniquely uplifting and that artists are less apt than football players to beat up their girlfriends or carry unregistered guns. I think that sports have artistry and value despite their obvious flaws. The second line of criticism involves spending public money that benefits private business, namely sports. My view is that that shouldn’t happen in the best of all worlds, but that’s not the world in which we live. The market dictates a public/private split on the cost of most sports venues; the exact ratio is a proper matter for negotiation.

Compete or retreat?
Still, there persists the basic question: Why keep up with the Joneses? Who needs civic glue? Surely we can do without the NFL, the NBA and even maybe the MIA. Who cares about competing?

It’s a question I addressed in a book about the history, design and construction of Target Field, although it could hold true for all sports and arts venues. I’ll paraphrase:

Since the mid 1990s, the quest for a new ballpark (and other sports and arts venues) has been a kind of long-running morality play in which Minnesotans have asked tough questions about themselves and their place in the world. The global economy is flattening in a way that made people run faster just to stay even. To spend public money of any amount on pro sports venues hits a raw nerve and prompts an identity crisis of sorts: What kind of place do we want MSP to be?

Do we want to keep pace with the competition by making a slew of investments on prerequisites that seem to define a successful global city? Or do we want to jump off the treadmill and retreat to simpler times — to just escape to the backyard to grill burgers, chop wood and disengage from the mounting complexities that keep gnawing away at our pocketbooks? After all, as garage logic has it, MSP would be a good enough place without its fancy amenities. 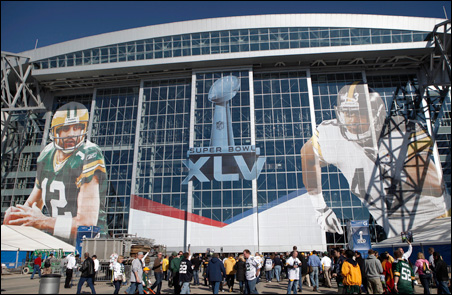 Overcoming smugness
Yes, we like the national attention that sports brings and we like the reputation of being an artsy city. We understand the payoff. But there’s another side to our personality. Our agrarian roots, our pietistic values, our fierce populism, our disdain for conspicuous wealth, our steadfast belief that Minnesota is an exceptional place that doesn’t need to follow the crowd — all these traits work against these investments. Scandinavians sometimes call this force janteloven, a kind of inner tug against excessive pride or ambition or self-promotion.

But janteloven is a self-destructive trait in a super competitive world, especially now as metro areas try to jockey for advantage while pulling out of a deep recession. MSP has done well over the past decade to overcome its innate shyness. It has extensively and impressively updated its sports and cultural infrastructure. Now comes the next big step.

Something so monstrous and showy as Cowboys Stadium doesn’t fit our personality. Something that’s elegant and integrated into the city — something like Target Field — would fit better. Keeping up with the Joneses isn’t always agreeable. But over the long haul it’s probably the right thing to do.