What continues to astonish me most, not only about city life but American life, is our easy tolerance of economic inequality. Three decades have now passed during which the gap has grown steadily wider between the very wealthy and the rest of us, and yet no one seems to mind. If anything, most of us appear to be pleased that the wealthy continue to strengthen their grip and pull away from the pack.

Even in the depths of the worst economic meltdown since the 1930s, there have been no hints of insurrection, no clouds of teargas rolling through the streets, no pitchforks pointed at the Wall Street elite who, along with their lax government regulators, perpetrated the current hardship.

Instead, politicians of both parties lavish extended tax breaks on the already wealthy; our “socialist” president, having failed to stir populist outrage, grovels before business groups, promising to further relieve the regulatory burdens that have held them back for so long; and the TV talkers appear to be genuinely puzzled over how the stock market can regain its bullishness and corporations chalk up record profits while jobs grow hardly at all. “It’s a great mystery,” one of them proclaimed last week with a straight face.

A lopsided economy
The numbers rarely mentioned are these: Between 1979 and 2006, the average household income rose by nearly 50 percent — a compounded gain of about 1.5 percent per year. An average household went from earning $47,900 in 1979 to $71,900 in 2006. (Those are Congressional Budget Office figures expressed in constant 2006 dollars.) That’s the happy part.

In summary, the story of the last 30 years is that while the poor and middle class muddled through with increasingly acute job insecurity, the wealthiest few, apparently without any extraordinary merit, made out spectacularly — and, if anything, strengthened their grip over the last few difficult years.

And so two questions arise: Why has that occurred? And why is the public not troubled by it?

Winner take all
A relatively new book, “Winner Take All Politics: How Washington Made the Rich Richer — and Turned Its Back on the Middle Class” by political scientists Jacob Hacker at Yale and Paul Pierson at the University of California-Berkeley, offers the best answer I’ve yet heard to the first question. 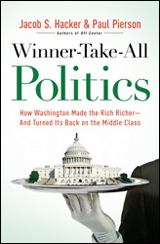 The authors set up a detective story and begin with a kind of whodunit interrogation of the usual suspects. Why the growing disparity? As it turns out, each suspect is complicit in the crime, but none explains fully how the American corporate elite, almost alone, has achieved such spectacular separation.

Start with globalization. Yes, the worldwide flattening of production and consumption has left the U.S. working class relatively weakened. Yes, advances in technology have eroded the wages of under-trained U.S. workers. Yes, failures in the educational/social system diminish the opportunities for U.S. workers to keep up with machines and foreign competitors. Indeed, those forces help explain how economic life has become riskier and more unreliable for most of us at the middle and lower ends of the income distribution. But they fail to explain the runaway incomes and assets of the richest among us, or how the wealthy have managed to restructure the economy in ways that shift the risks downward, burdening ordinary Americans with greater debt and bigger holes in the social safety net, and imposing broader financial risks (the shaky future of entitlements) on workers, investors and taxpayers.

In other words, technology, globalization and educational deficiency fail to explain how the wealthy were able to reshape the U.S. economy into a winner-take-all system that, in a distributive sense, resembles more closely the oligarchic systems of Mexico, Brazil and Russia than the economies of other Western democracies.

The takeover of politics
The answer is politics. Hacker and Pierson conclude that starting in about 1980 the wealthy and their allies took over the American political system and aren’t about to let go.

“This sounds inflammatory,” Hacker said one night last week in a small-group discussion at the University of Minnesota, “but we’re just trying to lay out our case. Looking back over 30 years it’s clear that the organized efforts of big business and its allies to influence public policy have overwhelmed the disorganized middle class.”

Hacker made it clear that he’s talking less about electoral politics than about the accumulation of policy shifts within government that, taken together, have greatly benefited the wealthy few at the expense of everyone else. Money talks. And forces aligned with business now hold great sway not only over Republicans but large portions of the Democratic Party that realized, beginning in the 1980s, that to get elected they had no choice but to solicit money from business interests (That’s where the money was) and, in many cases, to vote the way business wanted. Hacker’s book recalls the infamous quote from former Democratic Senator John Breaux of Louisiana, who quipped that his vote wasn’t really for sale; it was just for rent to the highest bidder.

Hacker and Pierson analyze in detail a “30-year war” in Congress over tax benefits, deregulation (especially of the financial industry), campaign finance reform, health insurance and other issues that ended in lopsided victories for conservatives. The rapid decline of labor unions coupled with the rising tide of business lobbyists, radio talk, Fox News, think tanks, campaign money, misuse of the filibuster and the breathtaking skill of conservatives to frame the debate have all come into play. As it turns out, millions of Americans will sacrifice their own economic interests for the sake of social concerns (abortion, gun control, immigration, gay marriage, fear of terrorists, etc.). Then there’s the problem of plain ignorance on the part of many voters and the demoralization of others. The fragmenting of the media compounds the problem; in the age of the Internet everyone gets to have his own facts.

Does mobility justify inequality?
As for inequality, I discovered years ago that Americans aren’t much bothered by it. A piece I wrote in Washington in the ’80s about the “new” growth in income disparity was greeted with shrugs and the general belief that people achieve the economic success they deserve. It’s part of the American Dream mythology that people easily and often migrate upward to a higher income status. Inequality, it’s believed, is a necessary motivator. Or, as it’s often put, Americans believe in equality of opportunity, not equality of outcome.

It sounds nice, but Hacker and Pierson found that opportunity is shutting down, that mobility has come nowhere close to matching the rise of inequality over the last 30 years. Over a decade’s time four in five Americans tend to stay in their same quintile, or nearly so. As for generational mobility, people in Australia, Sweden, Norway, Finland, Germany, Spain, France and Canada have a better chance of moving up.

Another popular argument is that inequality is the price Americans pay for a growing economy. But Hacker and Pierson have their doubts. During the 1979-2006 period, if all new income had been shared as broadly as it was in the 1950s and ’60s, the average household in the poorest quintile would have earned $6,000 a year more every year; the average household in the middle quintile would have earned more than $12,000 more every year; and the average household in the top 1 percent would have earned $700,000 less every year — about $500,000 per year in 2006 dollars rather than $1.2 million. While it’s true that the U.S. experienced phenomenal growth during the last three decades, other Western nations matched our growth and in some cases exceeded it without hyperconcentrations of wealth at the top.

Despite the Hacker-Pierson discussion, I’m still perplexed about why we Americans are so unbothered by our growing inequality. I know that it’s unseemly to resent the rich. No one wants to play class warfare, even if it has been played in reverse for 30 years.

Three reviews of “Winner Take All Politics: How Washington Made the Rich Richer — and Turned Its Back on the Middle Class”:
American Prospect
Crooked Timber
Salon

Why are Americans so unbothered by their growing economic inequality?